Although no official summons has been issued as yet, the FIA is expected to call team representatives to a meeting on Saturday morning.

The team could face a penalty unless the FIA accepts the left-rear wheel was fully tightened by the team before the car left the pits, and that a technical issue caused it to work loose later on.

Perez was on his second lap after taking new tyres when he spun to a halt after the wheel came off in a high speed left-hander, with no apparent warning. The wheelnut, with its retention device, was still attached to the wheel.

The FIA believes some form of debris might have caused the wheel to not be properly located on the hub.

A report from technical delegate Jo Bauer noted: "Marks on the inner side of the wheel let assume [sic] that there has been some sort of debris between the wheel nut and the axle shaft when the wheel was fitted to the car.

"This probably gave a wrong indication to the wheel operator that the wheel nut was properly torqued and tight. 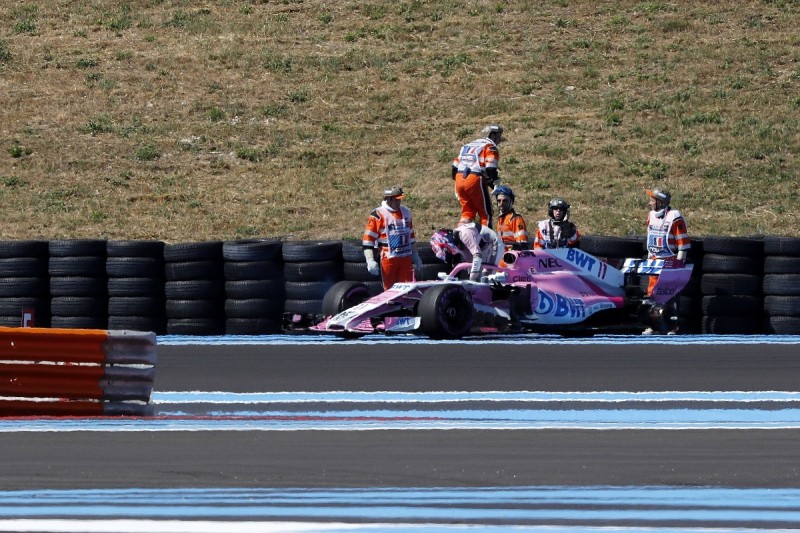 "But only the first stage of the retention device was engaged at this point and the red line on the axle shaft, which is only visible when the wheel is properly fastened could not be seen by the wheel operator."

Before that FIA report was issued team COO Otmar Szafnauer suggested it could have been an issue with one of the retaining bolts in the wheel.

"It looks like one of the retaining bolts in one of the plates within the wheel worked its way loose," he explained.

"And that meant that when the wheel clamped up it wasn't really on a true surface.

"It is a bolt that is tightened in and never checked and over time they may start coming undone so looks like we will have to check them and re-torque them."

After the incident occurred the team stopped the sister car of Esteban Ocon from running, at the request of technical director Andy Green, who was in Force India's mission control in its Silverstone factory.

However, after the Perez car was returned to the pits by officials and inspected by the team, Ocon was allowed to run again, and Perez was able to complete the last few minutes of the session.