The FIA is imposing a fresh clampdown on trick engine modes that help exhaust blowing of rear wings in Formula 1, following fresh intrigue about the matter

With Renault's blown rear wing having been under the spotlight during pre-season, and suggestions that Ferrari had been working on this area too, which was potentially linked to the mystery third paddle on Sebastian Vettel's steering wheel, the FIA has stepped in ahead of the Azerbaijan Grand Prix.

In a note sent to teams by Nikolas Tombazis, the FIA's head of single-seater technical matters, he said it was responding to "numerous questions" about exhaust blowing.

"We do not accept that engine modes specifically designed to increase the exhaust flow in corners are permissible," wrote Tombazis.

"Such (not permissible) engine modes can be either specific to a compressor-turbine by-pass system, or to flow passing through the cylinders.

"To be permissible, such flows should be the result of settings that genuinely increase the performance or reliability of the power unit, and not contrived to increase the exhaust flow."

The FIA intends to handle each case on an individual basis.

Tombazis added: "Notwithstanding the above point, we do not feel that it is practical or easy to write a catch-all rule that achieves this aim in a perfect way.

"For this purpose, we intend to control the usage of engine modes on a case-by-case basis and provide the necessary requests to the teams in order to stay within the acceptable limits with regard to [the above] point.

"While this is clearly not perfectly satisfactory, we feel it is the best possible way to handle the situation for 2018, especially as the effects are not large in any case."

Back on the agenda

Exhaust blowing of diffusers was addressed for the 2014 season after becoming commonplace in the preceding years. However, the 2017 high downforce regulations allowed for a lower rear wing, and teams have been able to gain some aerodynamic advantage from their exhausts, albeit to a lesser degree than previously. 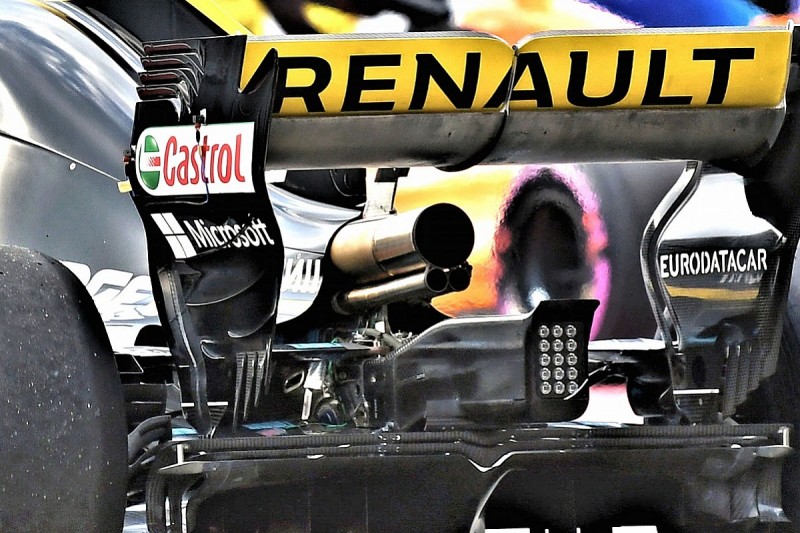 "One of the objectives of the 2014 regulations was to eliminate once and for all any exhaust influence on the car's aerodynamic performance," Tombazis wrote.

"And while this objective has been largely achieved, the 2017 rules brought back an exhaust effect on rear downforce, mainly because of the lower position of the rear wing. Clearly this effect remains much smaller than the effects that were commonplace in 2011-2013, but it is still undesirable."

The banning of monkey seats at the end of last year was intended to deter teams from devoting more resources to exhaust blowing.

Tombazis said that in terms of the physical location of exhausts, there was no concern over what some teams - like Renault (above) - had done in adopting an aggressive location.

"Regarding the tailpipe position in relation to the rear wing and bodywork, we accept any position within the stated limits of the regulations," he said.

"It is the right of any competitor to design their car in such way to have the most advantageous installation for their car's performance, provided this installation is indeed within the limits of the regulations."

The FIA intends to go even further in 2019 and make sure the position of exhausts are changed to guarantee there is no blowing of wings taking place.

Changes to the exhaust position for 2019 have already been discussed by the FIA and teams in the Technical Working Group, but no consensus was found.

Tombazis added: "For 2019, we intend to overcome this issue by acting on the exhaust position.

"This matter was discussed in the last TWG, but we do not feel that a sufficient solution was found.

"Hence, we intend to have a discussion on this topic in the next TWG, with the aim to achieve an exhaust position that clearly prevents any direct aerodynamic gain, thus eliminating the need for checks on engine modes."

Why Ferrari's F1 quit threat is real this time