Ferrari has unveiled a new nosecone design for the Singapore Grand Prix, as the team chases low-speed performance in its endeavour to continue its streak of Formula 1 victories

Having won the last two rounds at Spa and Monza, which are both typically high-speed circuits, the low-speed frailties of the SF90 were less exposed.

At maximum downforce, Singapore is expected to be a weaker circuit for the Ferrari team, as the plethora of tight, 90-degree corners mean that a lot more aerodynamic balance is needed to achieve a precise turn-in and a speedy exit.

Ferrari's attempts to achieve the former have resulted in the addition of a cape section underneath the nose, which a number of teams have already implemented this season.

This comes at the expense of the elongated mounting pylons, which featured a number of slots to control the air flowing underneath the nose.

Adding the cape offers a little more scope to produce front-end downforce, which cannot be achieved with the neutral front wing section mandated by the regulations.

This extends to the inside of the front wing, between the crash structure and the mounting pylon. Creating Racing Point-style 'nostrils', this further expands on the downforce produced.

The leading edge is angled upwards to build a stronger area of low pressure underneath.

To increase the maximum downforce available, the T-wing returns to the rear of the engine cover, as does the full-chord rear wing. 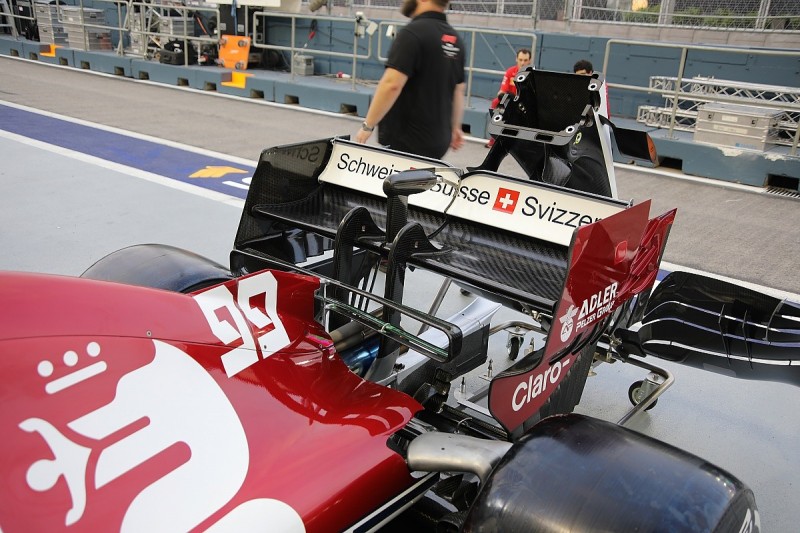 Elsewhere on the grid, Alfa Romeo has made a number of changes to the rear of its car to boost the level of downforce produced.

For Singapore, the team has brought a new T-wing with a bottom double element to eke out a few extra measures of downforce.

The rear wing endplates have also been changed for a design which resembles Mercedes's concept, adding small vortex generators to the rear section.

These fins will help to change the structure of the airflow shed from the rear wing, assisting with the overall downforce output by limiting the vorticity of the top corners which can upset the pressure distribution over the wing.

Alfa Romeo has also made changes to its own nose 'cape', adding a pair of slots to channel airflow under the nose with further control.