Ferrari has trialled a split wastegate design at the rear of its Formula 1 car in free practice for the Abu Dhabi Grand Prix, as it explores new powertrain developments

Having used just a single wastegate throughout 2019, Ferrari now falls in line with the other engine suppliers on the grid by branching the wastegate out into two distinct exits, as seen in Giorgio Piola's photographs.

Mercedes, Renault and Honda have all used twin-exit wastegates this year, and Ferrari did so in 2018 in a shotgun style before opting for a larger-diameter single pipe this year.

The team's usual wastegate looks set to return in future sessions this weekend, as the exhaust retains the metal ring which holds it in place.

A conventional wastegate in a turbocharged powertrain is used to keep the turbine within a certain range of operational speeds.

The MGU-H can also regulate the speed at which the turbo operates, but the wastegates are still required to take excess exhaust gases away from the turbocharger to relieve the overall pressure. 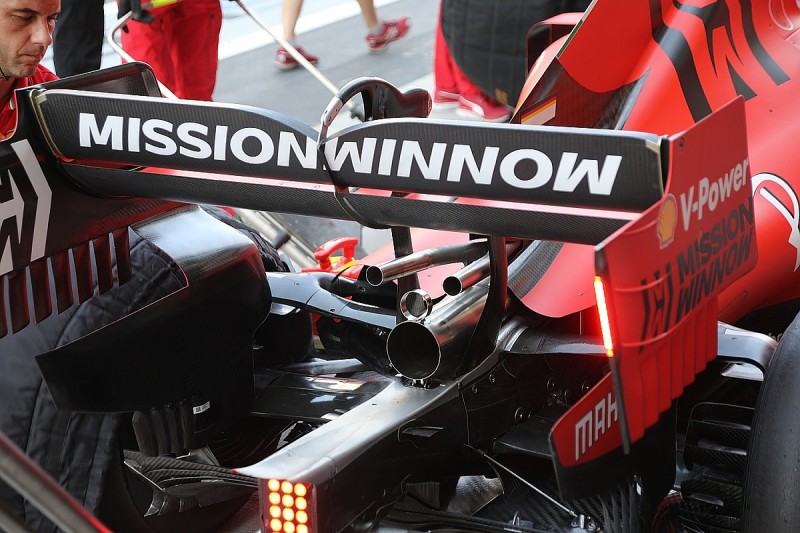 Part of the rationale behind breaking the wastegates into two is to rid the system of "backpressure", which is classified as any resistance against allowing the exhaust gases to flow freely out of the tailpipe.

Exhaust gases generally move in rotational pulses, and so tailpipes must be designed to ease the forces applied back on the turbocharger by the motion of those pulses.

Furthermore, branching a single tailpipe into two of a smaller diameter helps to accelerate the airflow passing out and also reduce the pressure within the system, according to Bernoulli's equation - when the speed of a fluid increases with a drop in static pressure.

The wastegates are also mounted some way above the main exhaust pipe, suggesting an attempt at firing the excess gases at the underside of the rear wing to increase performance.

Wastegates were separate from the main exhaust outlet ahead of the 2016 season in an attempt to increase the amount of sound from the powertrain.