Ferrari boss Mattia Binotto says his Formula 1 team has no answers on the reliability problems that hit both Charles Leclerc and Carlos Sainz in the Azerbaijan Grand Prix.

Leclerc was leading the race he was forced to retire with an engine failure, just two races after a similar disappointment in Barcelona, while Sainz had reported a brake-by-wire failure after going down an escape road, with the team clarifying that it was a hydraulic issue.

Haas driver Kevin Magnussen also retired with an engine failure in the latest of a series of issues that has hit Ferrari’s customer teams, as Alfa Romeo's Zhou Guanyu also retired.

Speaking shortly after Sunday’s race, Binotto said it was too early to give any details about what broke or if the retirements were related to earlier issues.

"We still need to analyse and understand,” he said when asked to explain the issues. “I think you can at the two cars, they had different problems. With Carlos now we'll look at the hydraulic system, and hopefully we'll identify it.

“On Charles a different one, certainly engine related, I think it's quite obvious by the smoke. Is that something we had in the past? I don't think so, but maybe yes, and we do look as well at what happened to our customer teams.

“But I don't think only with the telemetry data we can have a clear answer to the problem. The components will be shipped back to Maranello and as usual, disassemble and try to understand and to fix them as soon as possible.

“Is it something which is down to quality, reliability, whatever else, usage? I don't know yet. But I think it's no doubt that when you've got so many reliability problems, there is a concern. 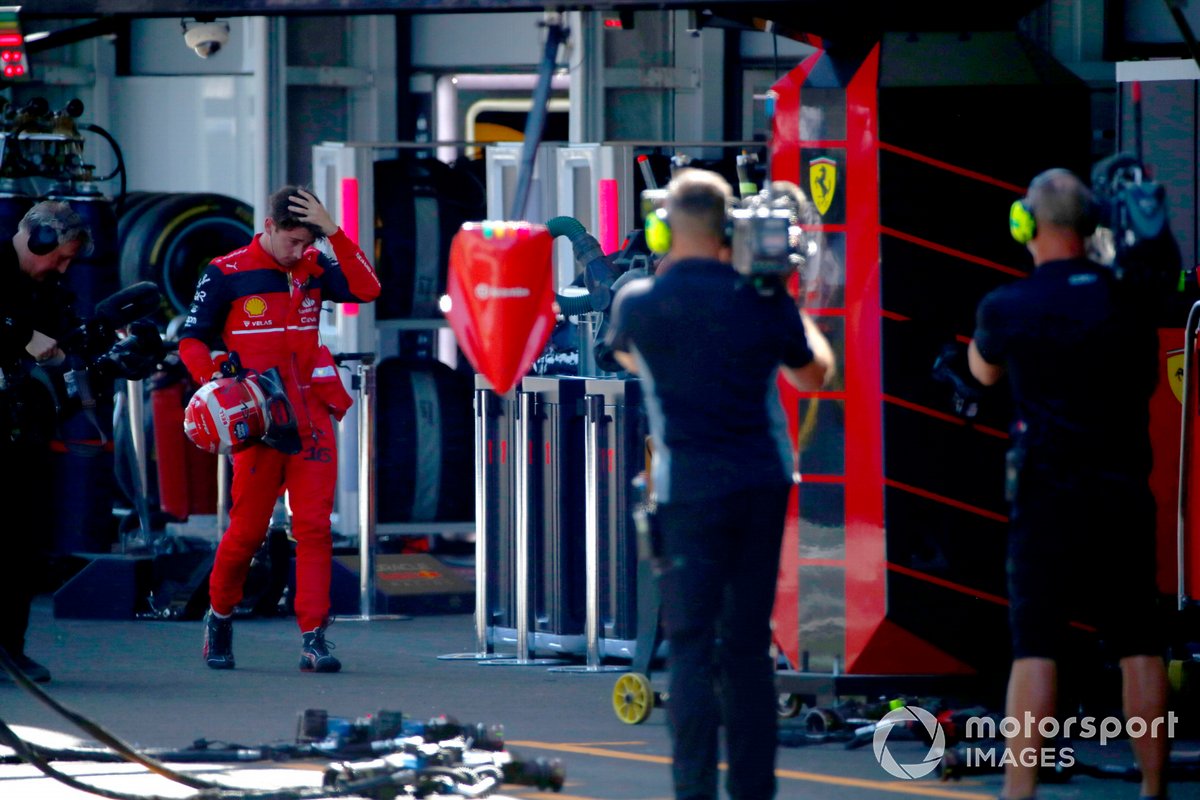 Charles Leclerc, Ferrari, walks back to his garage after retiring from the race

“I know that in terms of performance effort, the redesign of the full power unit, we made a fantastic job. But that means as well that overall, in terms of product, there is still very little experience and certainly I think in terms of reliability, still there is progress which is required."

Binotto felt the team made the right strategy calls prior to Leclerc's engine failure, as the Monegasque was brought in under an early virtual safety car while both Red Bull drivers stayed out, a move that left him with a handy lead when the RB18s did stop.

Although there was a tyre offset by approximately nine laps by the time both Red Bulls pitted, Binotto added that he thought Leclerc could hold on to win - citing low tyre degradation on the hard tyre.

“I think that the team has been very reactive at the time of the VSC, we called Charles in, because he was very close to the pit entry," Binotto explained.

“We have been very, very sharp. I think that the drivers reacted very well. And we had somehow I think an advantage at the stage. Indeed it was still a very long race, we needed to manage the tyres to the end.

“The tyre degradation on the hard what we saw was very little. So if we could have made the hard survive, it would have been the right call, but obviously, we do not have the answer to that.

“We will get the numbers and I'm pretty sure everybody will have a look at it to have a forecast of how the race would have finished. But we felt very strong, certainly in the lead with a strong tyre. And Charles was very happy with the car behaviour."