Alonso's early jump from 10th to seventh at Spa went to waste as cars passed him on the long straights due to his Honda engine's lack of top speed.

He called the situation "embarrassing, really embarrassing," over team radio and retorted "I really don't care too much about the gaps. This is just a test" when given information about drivers he was racing.

Alonso later asked for no radio communication from McLaren before retiring with a suggested engine problem when 12th.

When asked how much longer he can put up with his situation, Alonso said: "Seven or eight more races.

"We will consider all the options out there, but we did a fantastic qualifying, a fantastic start, we won a lot of grands prix in our careers."

He admitted this weekend that he has offers from rival teams and has long insisted he will make a decision about his future in September, having suggested earlier in the year that McLaren needed to be winning races before next month in order for him to stay.

"I think my stock value has never been as high as now seeing the offers that I have, so it's good," said Alonso.

"The team is working a lot. I know the guys have been sleeping very little this weekend so thanks for all the effort." 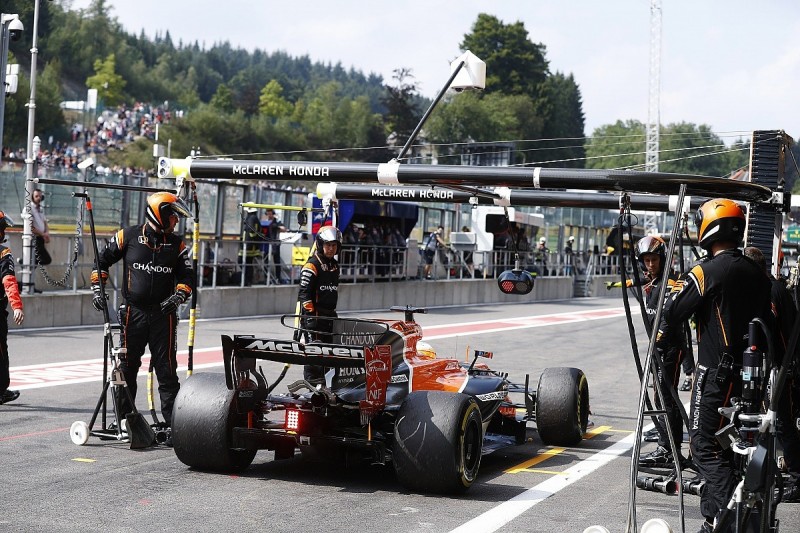 He did not rule out remaining at McLaren, but said it would be dependent on events of the coming weeks.

"We will see what happens in the next couple of weeks. I'm happy with the team," Alonso said.

"We've had three tough seasons so far but McLaren is one of the best teams in the world and I would be happy to keep working with them, but we need to see how things evolve in the next couple of weeks."

But Alonso also hinted that the only thing McLaren needed to change to be competitive was the Honda engine.

"There needs to be one change only," he said. "I think there are many answers out there and we need to find them. They will not come looking at the sky.

"We need to sit down and work on it and hopefully we find the best solution for next year."