Fernando Alonso admits he misses being part of Formula 1 championship fights now that it has been four years since he was last in title contention.

Fernando Alonso admits he misses being part of Formula 1 championship fights now that it has been four years since he was last in title contention.

Since then he has had to settle for a distant second to a dominant Sebastian Vettel in 2013, just two podiums in an underwhelming '14 campaign with Ferrari and then two seasons trying to bring the McLaren-Honda up the order.

"I've been lucky enough to experience that feeling five times," he said of being part of a championship fight.

"You train, you do the simulator, you go to the factory, you do events, you do media, you do whatever you do to be competitive on Sundays and fight for the title.

"From the last four years I miss this feeling of arriving with possibilities.

"But on the other hand I feel extremely lucky to have been able to feel that pressure and those emotions already five times, winning two, because there are many colleagues that have huge talent that never even have the chance to race in Formula 1.

"Some of them appear in Formula 1 but never have the chance to experience the podium, the press conference for the top three, never experience the feeling of starting in pole position, or winning one grand prix and they are very, very talented. 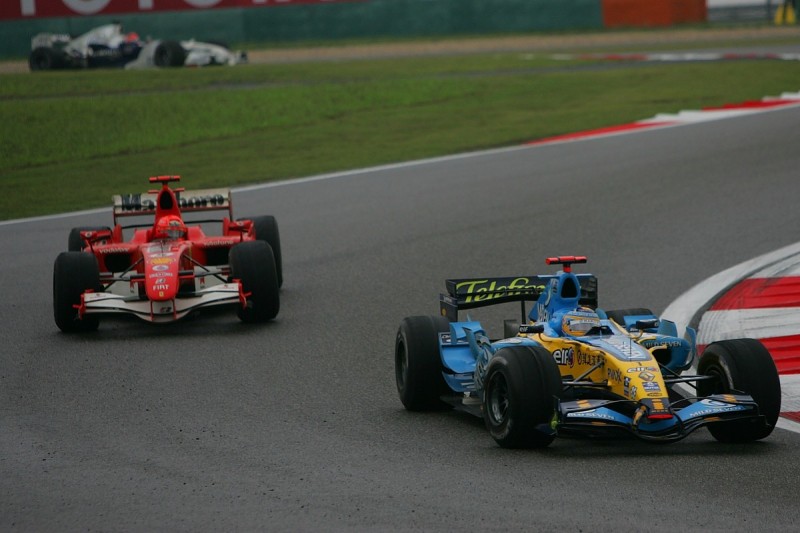 Alonso regards his 2006 title battle with Michael Schumacher - a Renault/Michelin versus Ferrari/Bridgestone contest - as his toughest.

"When the Bridgestones that year were performing well, he always delivered what he needed and won that race," said Alonso of Schumacher.

"But when Michelin had an advantage and we were quite confident, he was there.

"So on the weekend you were thinking of scoring many more points than him, he'd still be in third, fourth, second, always delivering something extra.

"With all the drivers that I fought, he was the only one able to do that."

Alonso admitted the extent of McLaren-Honda's recent tribulations had been hard to stomach for someone accustomed to success.

"McLaren is the second-best team in history in Formula 1 and when you are fighting for Q1, there is something that is not normal," Alonso said.

"Everybody in the team feels this pressure, these expectations that we are not able to meet yet. This frustrates all of us.

"Second is the personal frustration of not being able to fight for podiums, for victories and sometimes not even delivering what you are able to do because after 10 laps there are some problems so you need to de-tune a little bit the engine, batteries or something.

"Maybe a Sauber comes, they overtake you and everyone cheers a fantastic overtake but we have maybe 100 horsepower less.

"It's not that you forgot to drive, it's just there are situations that are out of our control."

How to fix F1's young-driver problem