Alonso was given a drive-through and two penalty points on his licence for spearing into Maldonado's Lotus at the first corner of the 2015 F1 season finale at Yas Marina, breaking its suspension and ending the Venezuelan's race.

But Alonso said the incident had been triggered by his McLaren getting a hit from Sauber driver Felipe Nasr going into the braking zone.

The 2005/06 champion claimed such decisions were to blame for declining F1 audiences.

"We blame the sound of the cars for there being less and less spectators at the track," asid Alonso.

"The FIA should look at other categories like MotoGP or WEC and how successful they are and how consistent they are with the penalties.

"They need to use some common sense.

"Today to have a drive-through after you've been hit by another car is a little bit strange, or maybe unique.

"I don't see this in WEC or MotoGP or other categories that are much more fun than us."

Maldonado shrugged off the crash as a racing incident, but joked that there would have been a much bigger furore had he caused it.

"It happened, this is racing," he said.

"Imagine if it was the other way around - big news!"

After an extra pitstop for repairs even before the penalty, Alonso found himself in a distant last place and intimated that he wanted to retire from the race.

He ultimately continued and beat the Manors to 17th, setting third-fastest lap after changing to super-softs eight laps from the end.

"We were I think two laps behind the other guys and we had to save tyres, save fuel and save everything," he said.

"I said 'guys, we have to have fun, to push flat-out and see what the limit is of the car and then if we have no fuel to finish the race it will be OK'.

"I don't think finishing is the main priority when you're 18th." 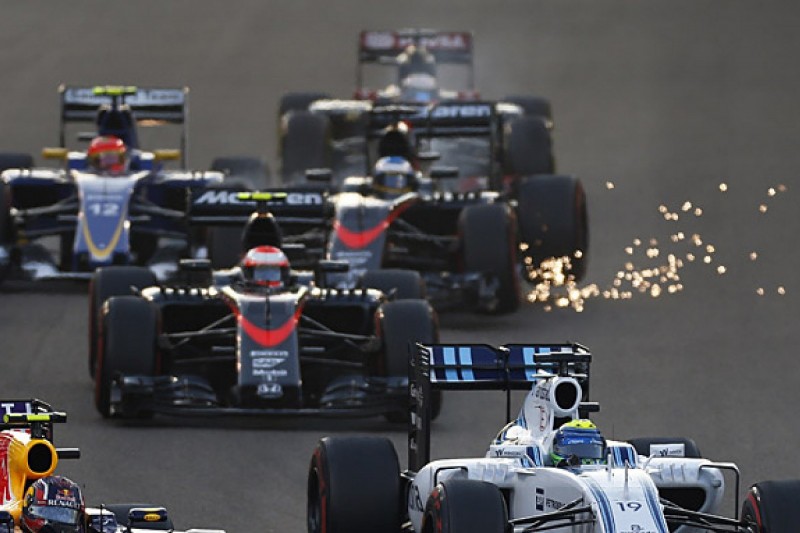