Valtteri Bottas ended the second day of the post-Spanish Grand Prix Formula 1 test at Barcelona fastest overall, with his lap of 1m16.904s set shortly before lunch

The Mercedes driver used supersoft Pirellis for his best time after he and Ferrari's Antonio Giovinazzi swapped places several times in the hour before lunch.

Giovinazzi did not improve on his morning lap time, so ended up 0.068s behind Bottas with his time set on hypersofts and completed more laps than anyone with 148.

McLaren's Lando Norris claimed third with his final lap of the day, taking the chequered flag as he posted a 1m18.039s using soft Pirellis.

He had a spin at Turn 12 during the morning's running, and his McLaren caused a red flag in the afternoon when it stopped on track with a "minor issue" on an out-lap.

"It was into Turn 12, it's the one corner that has been quite tricky because of the wind," said Norris of his morning spin.

"It was more of a mistake on my part, I pushed the entry a bit too much and lost the rear.

"In F2 you're able to control the car more when you're oversteering and from what everyone's seen in F1, the high downforce and the new surface, it's quite tricky when it starts to go and it's hard to get back.

"It did no damage or anything, just a spin." 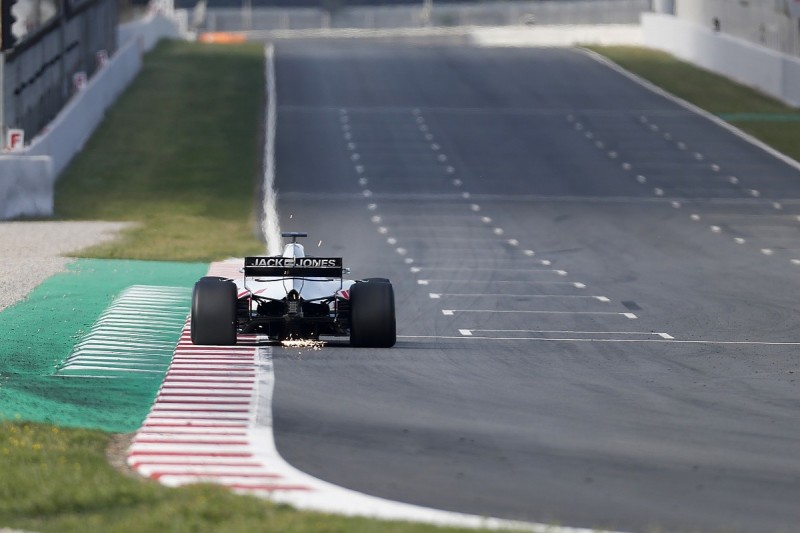 Kevin Magnussen was fourth fastest with his morning time, set on hypersofts, and caused one of two red flags in the afternoon when he pulled over between Turns 2 and 3.

Jack Aitken ended his first Formula 1 test for Renault in sixth, with his morning time set on ultrasofts.

Behind him, neither Sauber's Charles Leclerc nor Williams driver Robert Kubica improved in the afternoon, ending the day separated by 0.260s using hypersofts in seventh and eighth respectively.

Pierre Gasly took over the Toro Rosso that Sean Gelael drove for the first day and a half of the test, ending up ninth and 2.506s off the pace using mediums and ahead of the Pirelli test McLaren of Stoffel Vandoorne.

Jake Dennis improved his time to a 1m20.440s using mediums with an hour-and-a-quarter remaining, which put him 10th ahead of Gelael and the second Pirelli test car, Nicholas Latifi's Force India - the latter the fourth and final driver to improve during the afternoon.