Daniel Ricciardo set the fastest ever time around the Barcelona circuit on the second day of the final Formula 1 pre-season test, as McLaren missed most of the running

With the exception of the drivers who only appeared in the afternoon, most focused on performances run in the morning before switching to race simulations later in the day.

That meant Ricciardo's 1m18.047s, set just after 1pm, remained unbeaten as the rest of Wednesday was dominated by long runs.

Ricciardo's effort usurped Felipe Massa's time from 2008 as the fastest lap of this configuration of the Spanish Grand Prix circuit.

The Red Bull driver used the new hypersoft tyre for the first time to overhaul Lewis Hamilton's Mercedes, which had topped most of the morning across medium, supersoft and ultrasoft tyre runs.

Hamilton ended up 0.353s adrift on a 1m18.400s on Pirelli's ultrasoft compound, with team-mate Valtteri Bottas taking over for the afternoon and lapping a further 0.160s slower on hypersofts.

Ferrari rejigged its plan and only ran Kimi Raikkonen in the afternoon because the Finn was unwell, so Sebastian Vettel had an unexpected extra morning in the SF71H.

He posted the fourth-best time, 1.494s off the pace on soft tyres, and concentrated mainly on long runs.

Raikkonen only made it as high up the leaderboard as eighth when he emerged, and added just 49 laps to Vettel's tally of 66 in the process.

Behind Vettel came Brendon Hartley, who improved late on a mixed day in which he had a spin and a stoppage at the pitlane exit but still completed 118 laps.

Toro Rosso driver Hartley posted a 1m19.823s on hypersofts to vault up the order in the closing stages, and give Honda another boost as its old partner McLaren suffered miserable day. 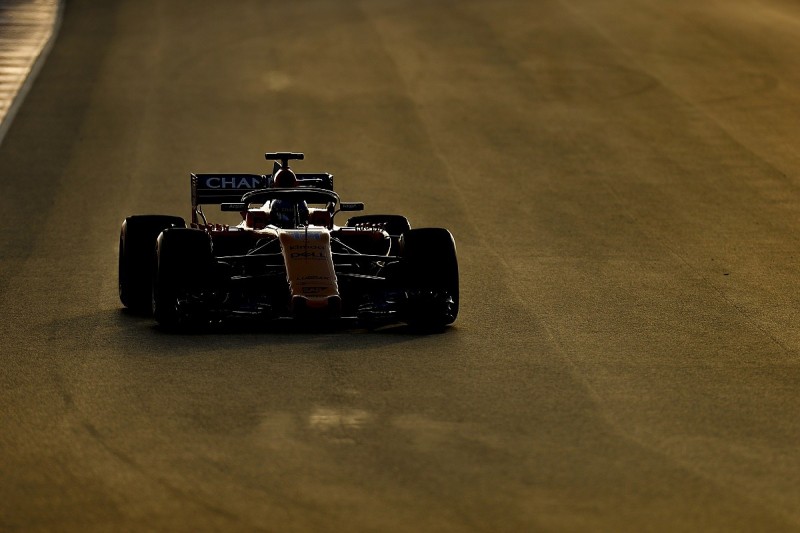 Fernando Alonso was quickest for part of the morning during a very productive opening two hours.

Alonso racked up 47 laps and set a 1m19.856s on hypersoft tyres, but then slowed to a halt on the run to Turn 7 after his Renault-powered MCL33 suffered an oil leak.

An engine change consigned Alonso to the garage for six hours and a half hours, though he emerged in the final 15 minutes to take his final tally to 57 laps.

Alonso ended up a couple of tenths quicker than the works Renault of Carlos Sainz Jr, who completed 88 laps over the first four hours before handing the RS18 to Nico Hulkenberg.

His team-mate was 0.8s slower as he focused on longer runs to rack up an even more impressive tally of 102 laps, making Renault the day's most productive team.

Those two were split by Romain Grosjean's Haas, Raikkonen and Lance Stroll, a trio covered by barely a tenth of a second.

Williams, Force India and Sauber did not make an impact on the leaderboard, although Sauber's Charles Leclerc did bring the meaningful running to an early end when beached his car into the gravel at Turn 12.

The test did resume briefly once it was cleared, but only to complete more FIA-mandated practice starts.