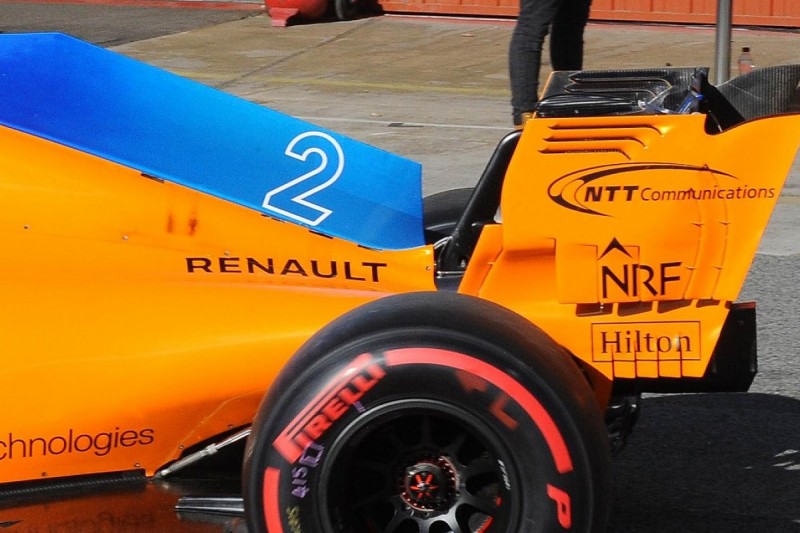 The McLaren MCL33 is running with three additional cooling slots towards the rear of the engine cover at this test as what racing director Eric Boullier calls a 'quick fix' for adapting to the different characteristics of the Renault power unit.

During both last week's test and on the first day of test two on Tuesday there were small burn marks on the bodywork, indicating peaks of temperature related to the exhaust that were causing damage.

"We're working on a new package with a new engine partner, so we have to detect the heat soak pockets," Boullier told Autosport.

"While we find some other way to redesign the cooling inside the car, we are using some very quick fixes now.

"Maybe we need to redesign some ducts somewhere, or whatever. It's normal - not only the engine but the car itself [is new]."

Boullier added that the small burn marks that have appeared on the engine cover are not a "showstopper" and that minor modifications will solve that problem.

"It's not important, we just have to put some more protection somewhere and that's it," he said. "It's not a showstopper.

"A couple of teams in the pitlane have a full-scale dyno, so they can detect it because they run a full car. "The other ones can't, so you have to run to detect your issues."

McLaren caused two red flags on the first day of the second test, one of which was for an electrical shutdown the exact cause of which is still being investigated and the other because of a hydraulic leak.

But Boullier is content with progress so far, insisting the car has hit its targets.

"We are every year fixing new targets, so far we have achieved them and now we know we can achieve them on the track as well," said Boullier.

"I don't know if it's good enough to be in front of which teams, because I think everybody is sandbagging a little bit.

"But the car is good and looks solid on track."