Massa's Tuesday benchmark, a 1m19.726s on super-soft tyres, was only a fraction slower than the 1m19.705s set by Mercedes driver Valtteri Bottas on ultra-softs last week.

Prior to that run Massa posted a 1m20.084s on softs, which compared favourably again to the best soft-tyre time from last week, a 1m19.952s by Ferrari's Sebastian Vettel.

Ricciardo was Massa's closest challenger on Tuesday, using ultra-soft tyres to lap 0.174s slower than the Brazilian, and he stressed Red Bull was not "holding two seconds in our pocket".

"We definitely feel we still can get more out of the car, but probably everyone can," said Ricciardo, who had a trip through the gravel on his first run on ultra-softs.

"Hopefully not Williams - hopefully that was their best today.

"I think Ferrari and Mercedes can still get more out of theirs.

"Even though Williams didn't run much last week, today they did a good run.

"I actually think they looked quite good.

"It's going to be interesting. Melbourne will be a nice little story." 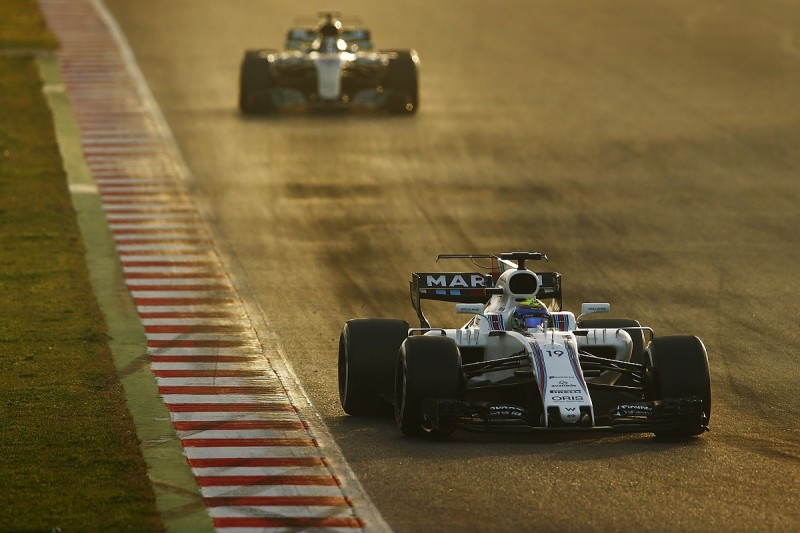 When asked about Williams being a possible threat after outpacing Mercedes, Lewis Hamilton said it would be "amazing" and that he hoped the British team would be in the mix.

Despite joking "we would love it more" than Hamilton if Williams could fight Mercedes, Massa said it was not something he was expecting.

"It was definitely a very positive day," he said. "I don't remember I did another day with 168 laps in my career here.

"Mercedes has shown already amazing speed last week. Everything they did they showed to be competitive.

"I don't think we are at the same level as Mercedes, but if we can have a great fight and maybe fighting for podiums it is already a great job."

Massa's rookie team-mate Lance Stroll lost half a day's running last week when a spin damaged his front wing, and another crash forced Williams to miss the entire final day.

After racking up the joint-highest tally on Tuesday, clocking 168 laps and managing a race simulation in the afternoon, Massa said the team could not afford a repeat of last week over the remaining three days of testing.

"Always when you lose a day, it is not great," he said. "We haven't got many parts, so we need to try to keep everything we can - it is so easy to go off.

"We need to try to keep doing what I did today, in all of these days."