F1 rookie Palmer feels he can prove himself against Magnussen

Jolyon Palmer believes he can still make a good impression in Formula 1 by getting on terms with Kevin Magnussen even though Renault's 2016 season looks set to be a write-off.

The two Renaults were slowest of all in qualifying in Baku a fortnight ago and have generally been fighting just to get beyond Q1, the lateness with which Renault's deal to re-acquire Lotus was completed having compromised this year's campaign.

With no certainty of a 2017 seat, Palmer acknowledges his best bet with Renault struggling is to improve his form relative to team-mate Kevin Magnussen, who has taken the team's only points so far and only been outqualified by Palmer once in a straight fight.

"I can still impress because I'm against a team-mate who's been on the podium," said the 2014 GP2 champion.

"He's got a year's experience racing in F1, so I need to show what I can do against Kev."

"We can see steady improvement from Jolyon.

"He's getting his head around how to manage tyres, look after his switches, so he's getting there."

Palmer is also refusing to give up hope of Renault gaining ground during 2016.

"It's not a write-off for the team because the guys are still working on this year's car, on everything," he said.

"Some of the focus is on next year, but at the moment we're still pushing on new things for this year.

"We've got new stuff coming. There are still opportunities even though we're at the back."

Palmer has not enjoyed the easiest start to his rookie season in Formula 1. But rookie seasons in teams that are in a state of flux are never straightforward.

It would be easy to focus on his multiple shunts during the Monaco Grand Prix weekend, or his woeful lack of pace in China (where he finished last), and the fact he's been outqualified by Magnussen more often than not, and conclude Palmer's not been up to the task.

But there are mitigating circumstances. His car sustained undetected floor damage in China. With a new one installed for the next race in Russia he qualified within a tenth of his more experienced team-mate.

Discounting Russia and Canada, where Magnussen didn't participate in qualifying, the average gap is only 0.137 seconds, and don't forget Palmer was ahead on his debut in Australia.

Palmer has found it difficult to get comfortable in a car that has been inconsistent, and particularly difficult to drive over bumps and kerbs.

But it does seem he made a set-up breakthrough in Montreal, where he struggled badly on Friday but came within 0.015s of making Q2.

In Baku he qualified last, but lapped within 0.046s of Magnussen.

The problem was Palmer then went off three times in the race and finished behind his team-mate, who started from the pitlane.

Palmer is getting on better with his car at last, but now he needs to cut out those mistakes and prove he can string it all together with consistency. 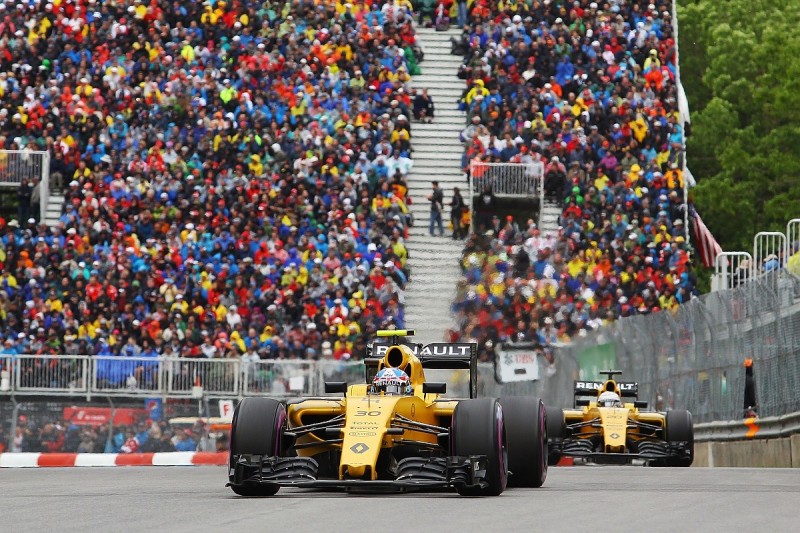