The warm afternoon session got off to a false start, being immediately red flagged for Nikita Mazepin's Haas coming to a halt on pit exit. It led to the Russian remaining in the garage having also missed all of FP2.

With a five-minute delay the lights sprang to green again for Qatar's final practice session ahead of Saturday night qualifying.

Given the daytime conditions being less representative for qualifying and the race than Friday night's FP2 session, third free practice got off to a slow start but the Losail circuit still saw plenty of running on F1's first-ever weekend in Qatar.

After a quiet opening spell Alpine's Esteban Ocon set a first hot lap of 1m24.864s, which he soon brought down to a 1m24.580s on Pirelli's softs.

Mercedes' Valtteri Bottas quickly despatched the Frenchman with a 1m24.019s with his soft-shod Mercedes.

Team-mate Lewis Hamilton took one tenth out of Bottas' time to go top with a 1m23.950s on the same compound.

Alpine's Fernando Alonso briefly took over top spot before being demoted by Bottas and then Hamilton, who lowered the benchmark to a 1m23.152s on softs.

Red Bull's Max Verstappen made a traditionally late start to his FP3 running, joining just before halftime to go straight to the top of the leaderboard with a 1m23.121s, a mere 0.031s quicker than his title rival. 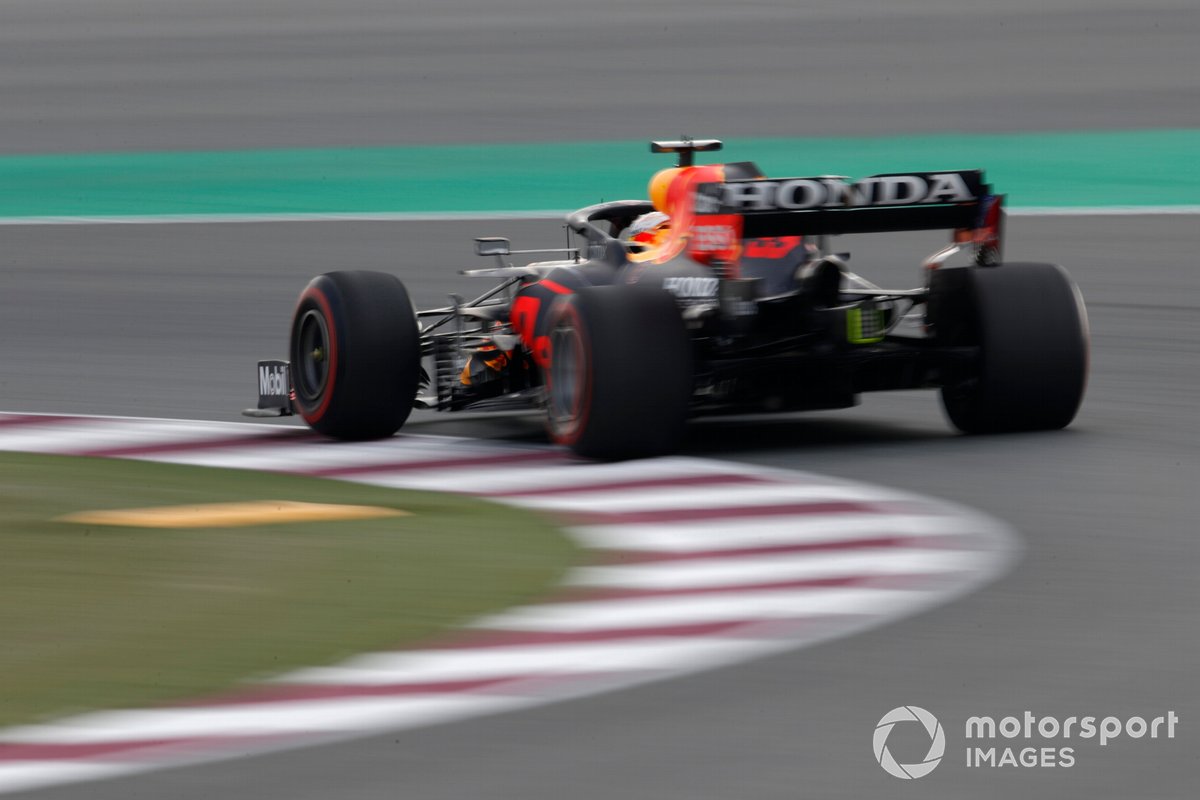 Verstappen appeared to gain the edge in the high downforce Turn 12/13 combination, which Mercedes manage to erase soon after.

Hamilton struck back with his next effort, but Bottas went even quicker to restore a Mercedes 1-2, the Finn setting a time of 1m22.573s as all leading drivers stuck to Pirelli's softest compound.

After a typical mid-session lull the action ramped up again in the final 20 minutes, with Bottas and Hamilton both taking a 0.2s bite out of their best lap times to secure a Mercedes 1-2.

The world champions stayed on top ahead Verstappen in a strong, if meaningless, showing for the Silver Arrows.

Gasly split the Red Bulls by taking fourth ahead of Sergio Perez.

Sainz was sixth for Ferrari head of Gasly, followed by Alpine duo Alonso and Ocon, and the second Ferrari of Charles Leclerc.

Yuki Tsunoda completed the top 10 for AlphaTauri, ahead of McLaren's Daniel Ricciardo in 11th.

Sebastian Vettel was 12th for Aston Martin, followed by the second McLaren of Lando Norris and Williams' George Russell.

Mick Schumacher set the 19th and slowest time in the Haas, team-mate Mazepin remaining in the garage after his early stoppage.

Race control took a more relaxed approach to track limits from FP3 onwards, focusing solely on Turns 2, 7 and 16, AlphaTauri's Pierre Gasly losing his fastest lap for going wide out of the final corner.

Further on-track incidents were limited to innocuous spins for Gasly, Leclerc and Schumacher.