Although Verstappen won from pole and initially looked to have Leclerc easily covered, Mercedes’ race pace brought it into play with a one-stop strategy versus Red Bull’s planned two services.

That gave Lewis Hamilton a sniff of an unlikely win, before he initially lost that then regained in during dramatic virtual and the full safety car periods close to the end of the race.

When the lights went out under thick cloud cover that had built up ahead of the start, Verstappen quickly moved to chop off Leclerc’s look to the inside of Turn 1.

In any case the Ferrari driver was never close enough to make a move, while behind Sainz and Hamilton touched lightly as the Mercedes gained ground considerably around the inside of the Tarzan hairpin.

The pack made it through the opening turns without further incident, with Hamilton the only one of the leaders to use the low line through the steeply banked Hugenholtz Turn 3.

Verstappen pressed his advantage to escape DRS range to Leclerc by the end of the second lap of 72, with Leclerc going from 1.5s behind two laps later to only a second behind his rival over the next few tours.

But just as it looked as if Leclerc might be able to gain the overtaking aid, Verstappen suddenly found a chunk of pace in the low 1m16s to re-establish his bigger advantage. 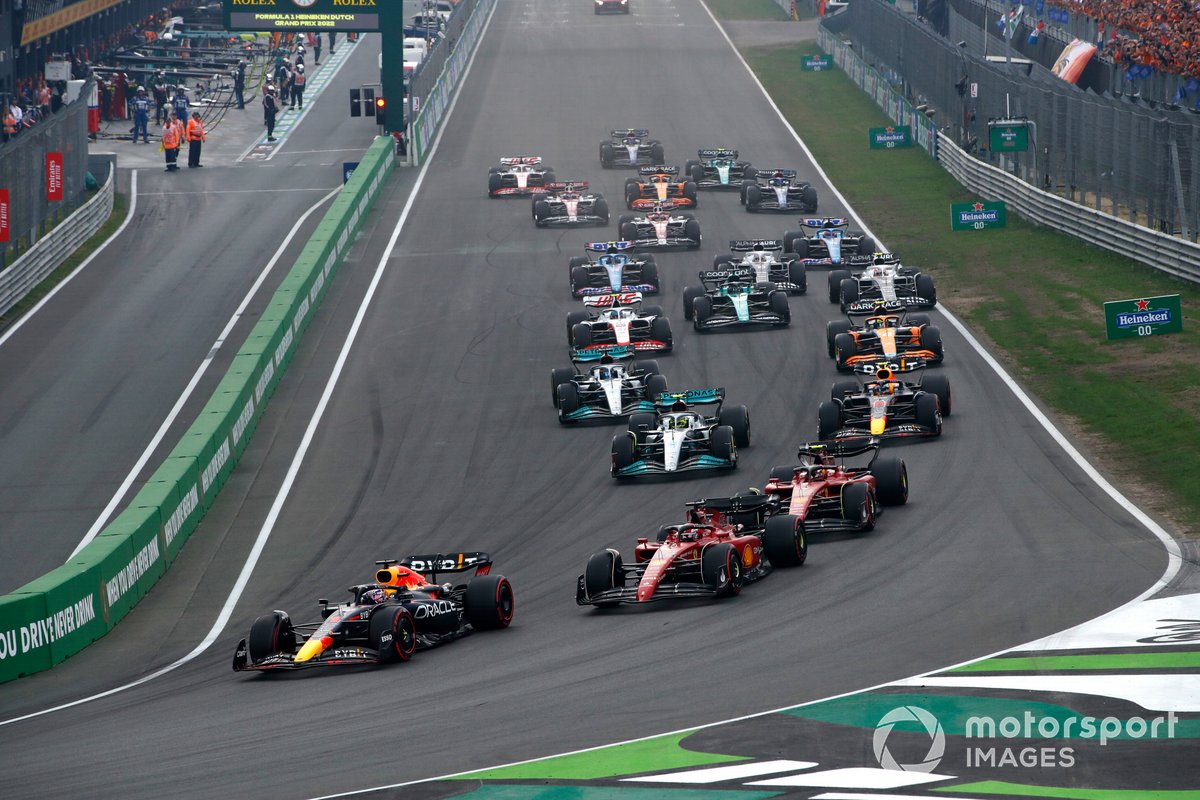 The two leaders were the only pair able to stay in that laptime bracket, with Sainz soon falling far behind Leclerc and with Hamilton swarming – the highest place driver to start on the medium tyres compared to the softs being run on the leading three cars.

As the race settled down, Verstappen continued to edge away from Leclerc – his lead rising steadily towards three seconds before ballooning to nearly five before Ferrari called Leclerc in at the end of lap 17.

Red Bull responded on the subsequent tour and despite his similar service to go from the softs to the mediums being nearly a second slower than Ferrari’s, Verstappen emerged with his lead barely tripped given his in- and out-lap speed.

The top two pitting left Hamilton to lead on his first stint mediums, with George Russell running three seconds behind his Mercedes team-mate having started on the same compound and battled by Lando Norris once DRS was activated after the McLaren had jumped the second Silver Arrows car at the start.

Verstappen and Leclerc used their fresh mediums to head back towards the Mercedes cars over the next phase of the race, with the Red Bull, which had been nearly nine second off Hamilton’s lead when he returned from the pits, reaching DRS range behind Russell on lap 27.

But at the start of the next lap, Verstappen used the DRS to shoot right up behind the Mercedes and blast by to move up to second on the outside run through Tarzan.

Before Verstappen could close on Hamilton, Mercedes brought the Briton in to take the hard tyres at the end of lap 29 – an attempt to complete the race on a one-stop strategy. 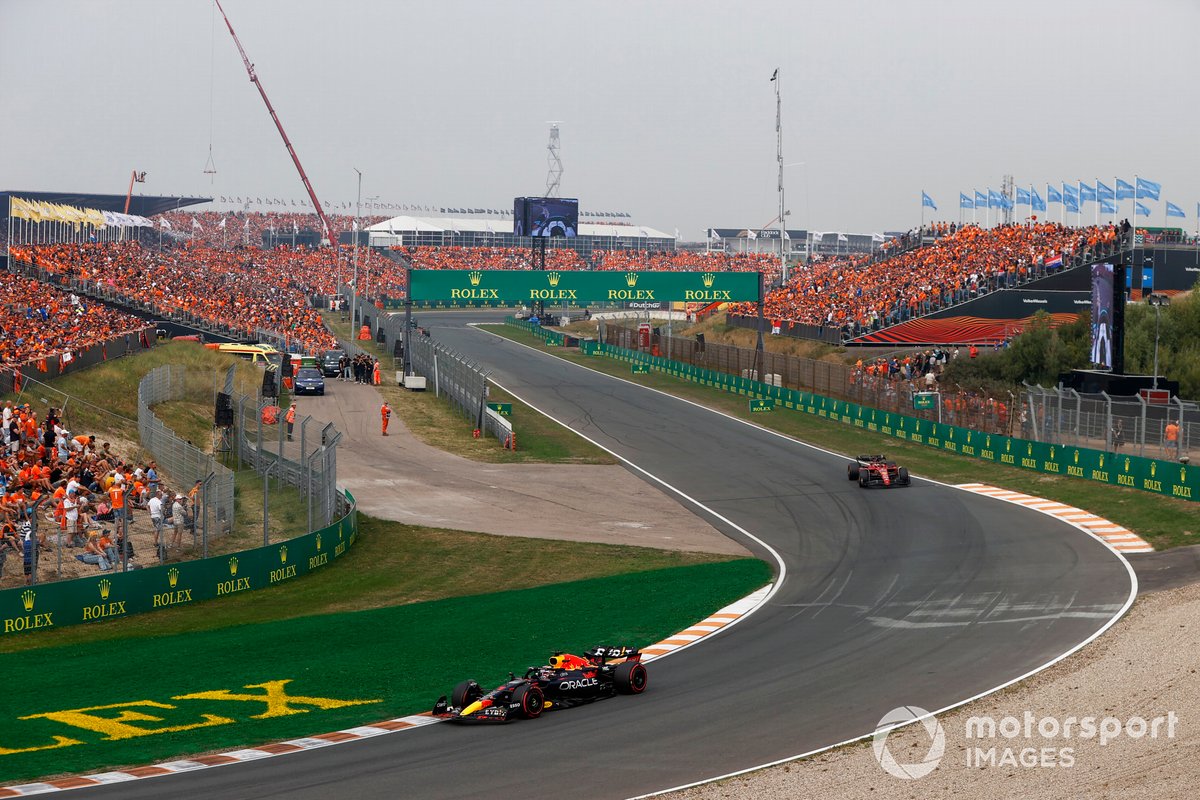 With the home hero handed the lead back and saying he was not interested in trying the hards, Hamilton rejoined a net fourth (which became actual fourth one lap later when Russell pitted to mirror his team-mate exactly) behind Sergio Perez in the other Red Bull – Sainz having fallen out of contention due to a calamitous Ferrari pitstop shortly before Leclerc came in for the first time.

As Verstappen began a charge that would double his lead over Leclerc and be 10s clear shortly after halfway, Hamilton and Russell used their hards to quickly home in on Perez.

On lap 36, Hamilton used DRS to attack Perez on Tarzan’s outside line, with Perez locking up on the inside and aggressively running the Mercedes wide before Hamilton backed off.

Hamilton attacked again on the Turn 11 entry to the track’s stadium but was again rebuffed on the outside line, but the next time by into Turn 1 he was able to run around the outside to take third.

But there was a sudden danger when Sebastian Vettel’s lapped Aston Martin emerged from the pits just ahead of the battling pair and stayed ahead for several corners, which meant Perez could crowd Hamilton but was unable to pass when Vettel eventually allowed the by – the German receiving a five-second penalty for his actions.

Hamilton set off after Leclerc and Verstappen, who had changed his mind about the durability of his mediums and Red Bull considering hards for his second stop, which it gave to Perez on lap 40, just after Russell had also passed him at Turn 1.

Ferrari realised Leclerc would have little defence against the charging Mercedes pair and he also came in to take the hards at the end of lap 45 – by which time Hamilton had gone from nearly 20s behind Verstappen to not much above half that. 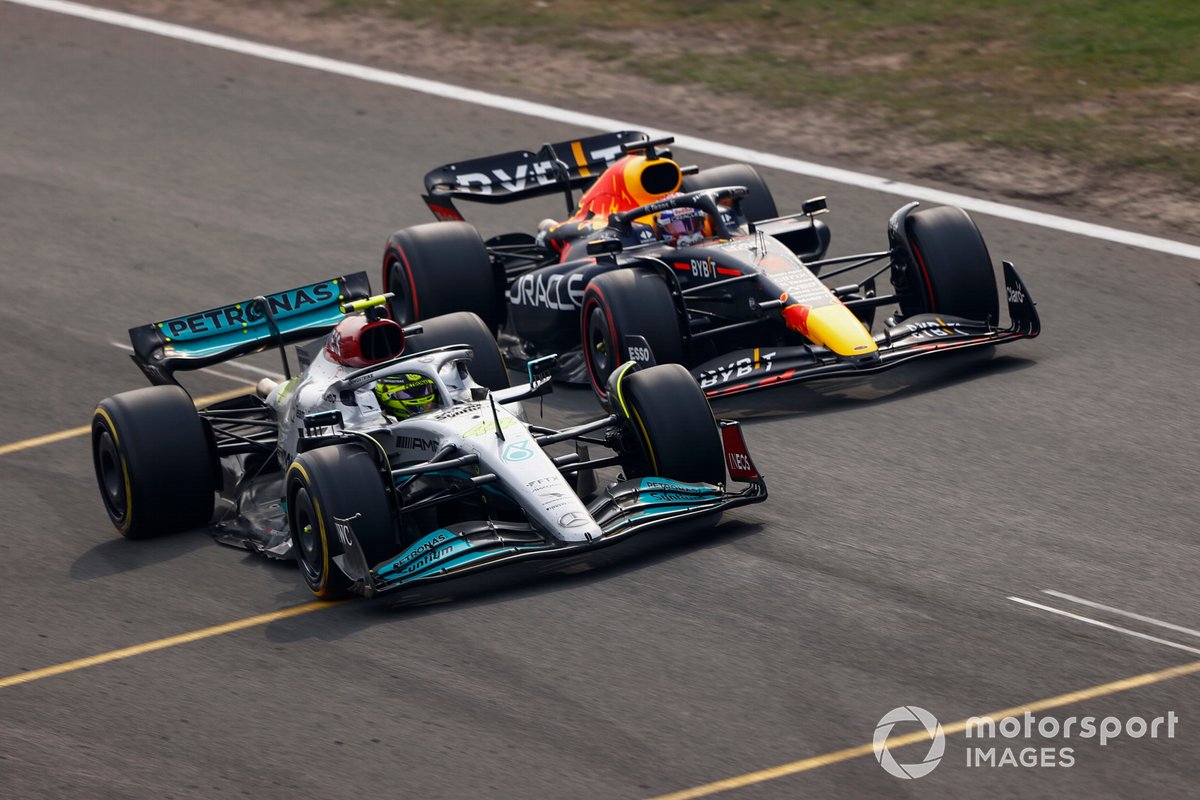 But around the same time, the race changed dramatically when Yuki Tsunoda stopped in the middle of the fast Turn 4/5 sequence – initially fearing his wheels were not properly attached after his second stop back in the pack.

He got going again and returned to the pits where AlphaTauri spent 30s checking something inside his cockpit – possibly his seatbelts – before he rejoined, but then did stop at Turn 4 saying he thought the differential was broken.

That meant the virtual safety car was activated and Red Bull could bring Verstappen in for hards with a cheap pitstop, which preserved his lead.

In fact, it stayed exactly the same as Mercedes also used the temporary suspension to put Hamilton and Russell back onto the mediums – the former recognising the VSC had “stuffed” his previous charge on the one-stopper.

When the action went green again on lap 50, Verstappen and the Mercedes shot into the 1m14s bracket – with Hamilton facing a 12.6s gap and Leclerc back to fourth after losing out having made his stop before the VSC.

Over the next couple of laps, Hamilton closed that to 11.4s before the race picture was massively altered again on lap 55, this time because Valtteri Bottas lost power in his Alfa Romeo and pulled over just before the first corner on the main straight.

That meant the safety car was activated, with Red Bull bringing Verstappen in to go back to the softs and the two Mercedes staying out while most others – including Leclerc – also dived in to fit the red-walled rubber. 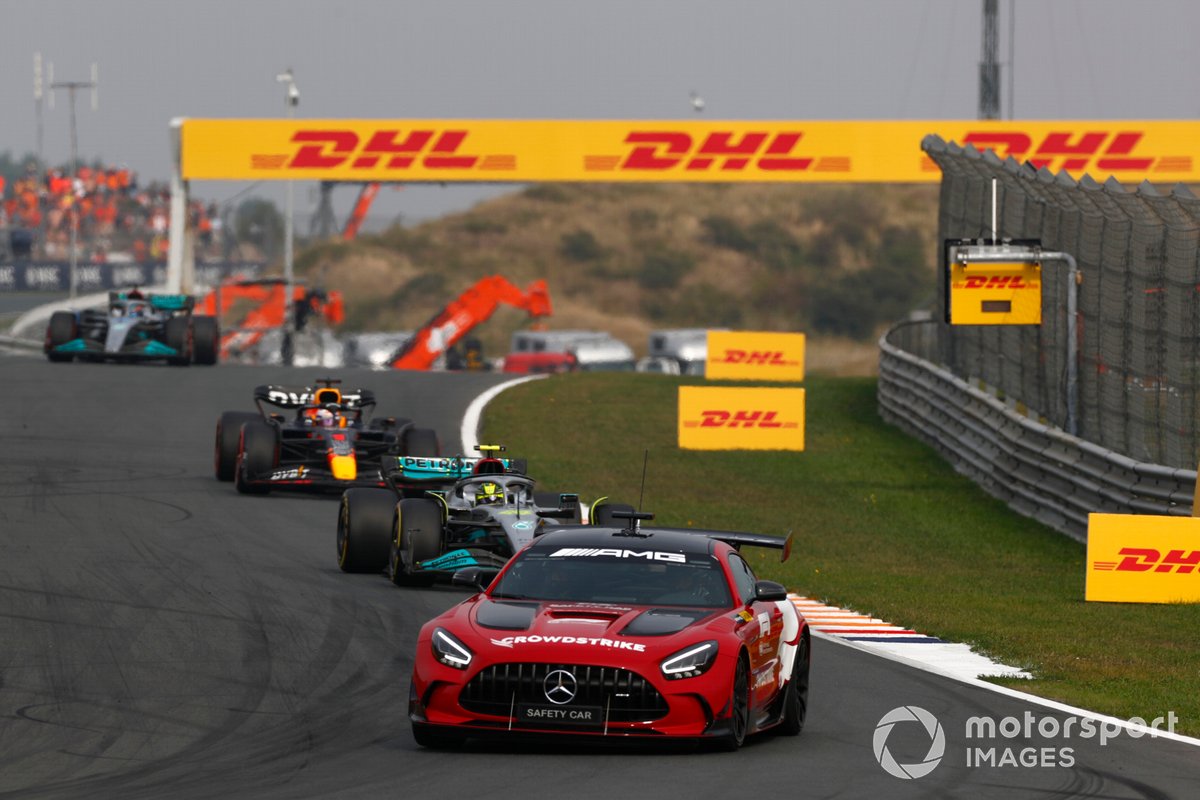 The next time by, Russell demanded Mercedes put him on the softs as he was losing tyre temperature in the mediums at low speed, which allowed Verstappen back into second behind Hamilton who remained on the yellow-walled compound.

The race restarted on lap 61, where Verstappen was all over Hamilton’s rear end as they raced down the main straight and he easily slipstreamed by to retake the lead.

Verstappen blasted to a 1.7s lead at the end of the first lap back to racing speed, with Hamilton fuming to Mercedes about its decision to leave him on the mediums.

His pace was so poor that Russell, who had seen off Leclerc’s attentions around the outside of Turn 1 at the restart, was able to quickly close in and jump his team-mate – although not before they nearly came together running down the main straight when Russell had DRS.

Hamilton was then overcome by Leclerc to fall off the podium, still sending angry radio messages about his final tyre strategy, while Verstappen pulled out an eventual winning margin of 4.0s.

Sainz crossed the line fifth having come back into the picture and got ahead of Perez during the VSC and safety car chaos, but he dropped down to eighth in the final order as a result of an unsafe release into the path of Fernando Alonso at their final stops during the Bottas-stoppage-caused race neutralisation.

That meant Perez, Alonso and Norris moved ahead to take positions five to seven, with Sainz also having to explain post-race an incident with Esteban Ocon (ninth) where the Ferrari appeared to overtake the Alpine under yellow flags activated when Bottas stopped.

This followed Sainz’s initial first pitstop disaster when Ferrari did not have all his medium tyres ready in time and Perez, behind the Spaniard in the first stint after starting fifth, running over and breaking a Ferrari wheel gun that had been left in his path in the tight pitlane.

Lance Stroll completed the top 10 with Bottas and Tsunoda the only retirements.