The Red Bull driver was one of several to have his best laptime scrubbed for exceeding track limits at Copse, meaning he fell from seventh to 10th in Q3.

"At least there is a right and a wrong, but I would suggest they need to put a deterrent in there, either gravel or more Astroturf," he said.

"The wind has been tricky, but I won't use that as an excuse. Even without wind we are going to use every bit of track

"To monitor it [in the race] will be difficult. If I see someone then I will call it in over the radio, and I'm sure if someone sees me they will do the same.

"We have to approach it on thin ice, as I did today, but on the last lap I got a bit too greedy."

Ricciardo revealed his team-mate Daniil Kvyat requested a strict policy in qualifying, though the Russian suggested the stewards could be more lenient in the race.

"The FIA told us zero tolerance, which I 100 per cent agree with," Kvyat said. "It is how it should be.

Williams driver Valtteri Bottas agreed with Ricciardo that having run-off on the outside of corners is not enough of a deterrent.

"Everyone wanted a better solution or an answer or something that will slow the car down if you go wide," Bottas said.

"You just gain time if you go off the track which is not ideal.

"It's hundredths but it all counts. I understand for the race, it's going to be the same. 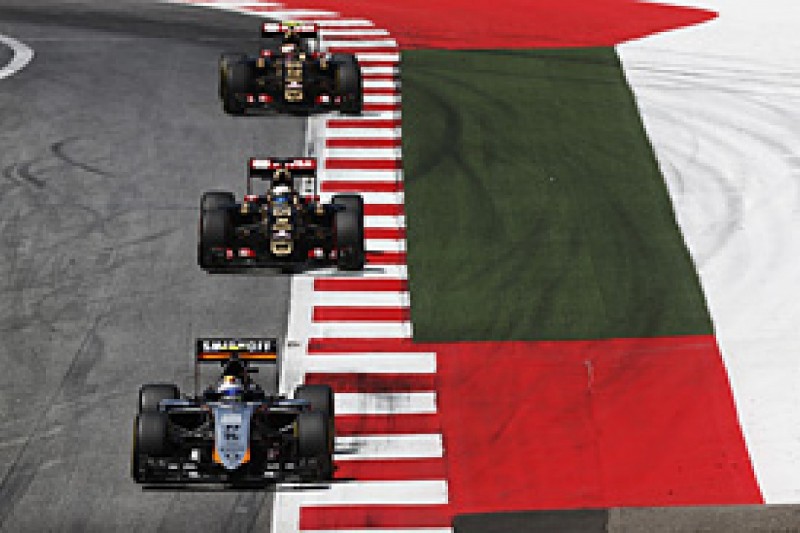 "If you go out of the track and you gain an advantage, there will be penalties immediately."

Lotus's Pastor Maldonado, who was another driver to lose his best time for running wide at Copse, suggested a similar solution to one adopted at Turn 8 in Austria (pictured).

"That was the rule we agreed in the briefing yesterday, and the rule was to not go over with the four wheels," he said.

"As soon as we were crossing by one millimetre, they call you. They should extend [the artificial grass] and then it's slower.

"It's like the last race in Austria. [Last year] everyone was going very wide, and this year they put it [the artificial grass] in and no one is going over there."

Ferrari driver Sebastian Vettel, who raged over Red Bull's team radio about track limits last year when fighting with Fernando Alonso, said it should not be a problem in the race.

"We have to stick to it," he added. "The first lap I did it was wide, after that it was fine.