Formula 1 drivers have admitted they were confused by the "weird" and "made for TV" unlapping procedure during the late safety car in the Abu Dhabi Grand Prix.

Race control initially said that lapped cars would not be allowed to overtake, but then announced that those between leaders Lewis Hamilton and Max Verstappen would after all be required to overtake the Mercedes driver before the race resumption.

Lando Norris, Fernando Alonso, Esteban Ocon, Charles Leclerc and Sebastian Vettel – who were running in seventh to 11th places – were all required to pass.

That allowed Verstappen to close up on Hamilton for the restart, which happened at the end of that lap. The Dutchman then passed Hamilton on the final one-lap sprint to the flag, helped by his fresh soft tyres, to claim the race win and the title.

The unusual procedure, which was the subject of a post-race protest and intention to appeal by Mercedes, came as a surprise to the drivers.

"I didn't actually know it was only like the first three or four [five] up to Max," said Norris, who kept his seventh place at the flag ahead of Alonso. 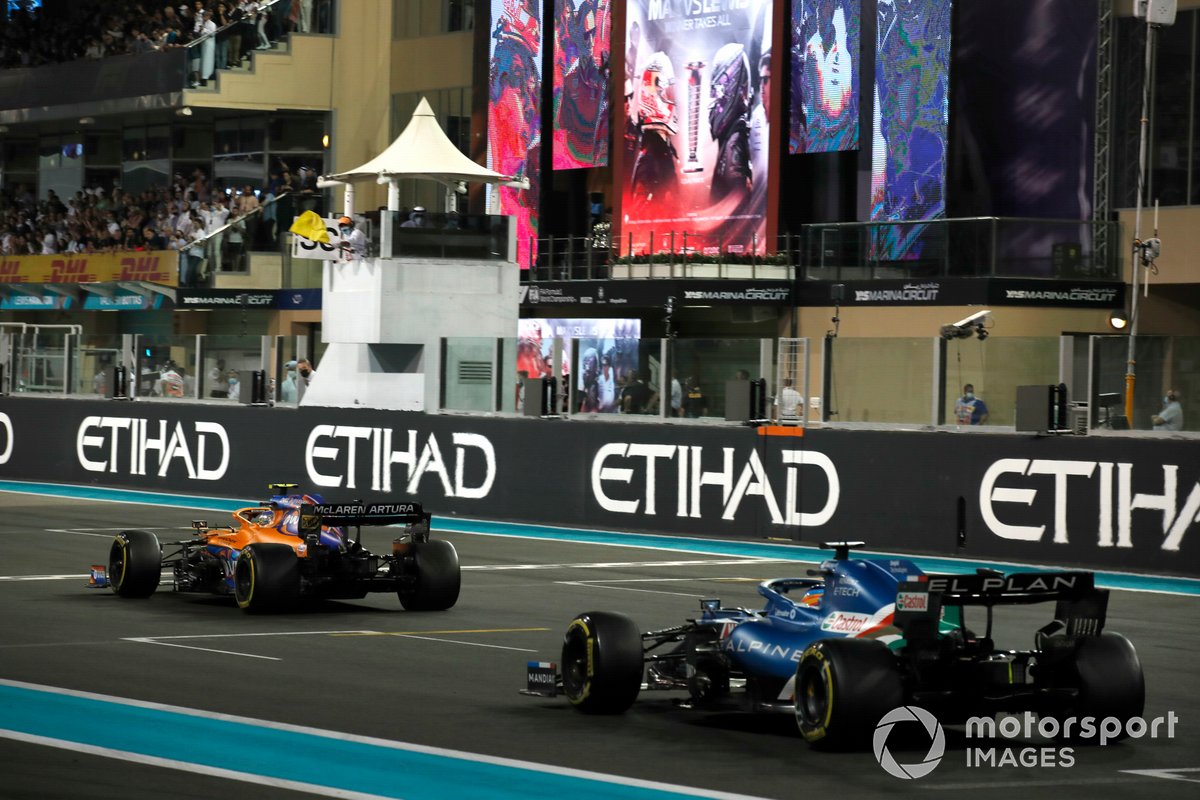 "But they said that they're not gonna let us pass. So I'm guessing that was a message to say, they were just not going to let us pass at all.

"But then to suddenly do it just for the final lap, and for a one lap shootout, then I'm a bit surprised."

"When the safety car was out I thought we were able to overtake quickly, because normally it is what happens," said Alonso.

"You see the green light of the safety car, and then you are unlapping yourself until they remove the car.

"But we didn’t have that green signal, and then two laps after the engineer told me that you will not be able to unlap yourself, and the positions would stay like this.

"One corner later the green light came on and I said, ‘But we have a green light?’ And they said, ‘Yeah, yeah, you can do it now, follow Norris.’ And I followed Norris. So it was a little bit confusing."

Ocon and Leclerc remained in ninth and tenth positions, with Vettel just outside the points in 11th.

"For me it was a bit weird because I was a bit in the middle of nowhere," said Leclerc.

"We could overtake the leaders I think for just like a lap before restarting, and we were in the middle of nowhere. 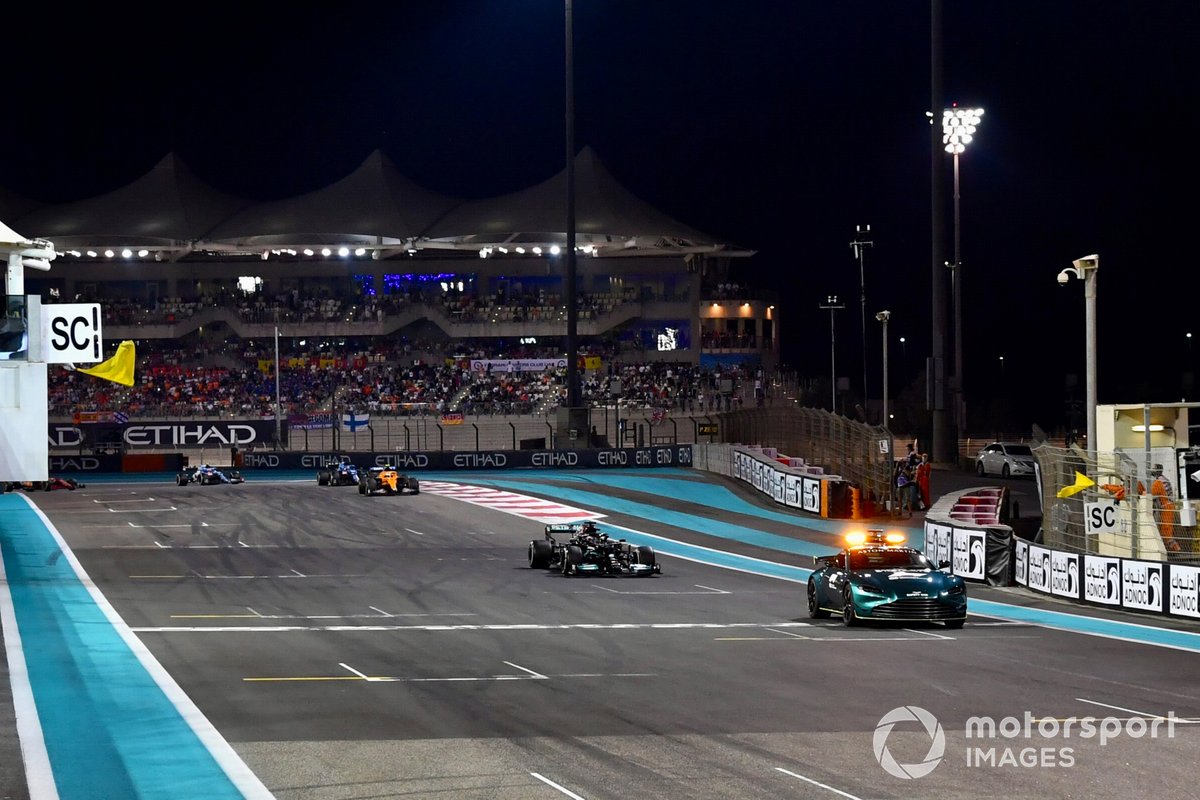 "I was just fighting for the ninth place with Esteban, I think, just in front. But first I was told I would not be able to unlap myself, at the end at the last moment we actually had the opportunity to unlap ourselves.

Vettel said he got the message late: "Very late, but I think too late, they should let us pass straight away like other times.

"And obviously, you have the guys fighting in the front. So you've just got to clear the path. I don't know what it was. For us it was a shame because we didn't have a race then, because everything was spread out."

After the aforementioned cars were allowed past, the next lapped car – the McLaren of Daniel Ricciardo – was obliged to wait behind Hamilton and Verstappen, with Lance Stroll and then third-placed Carlos Sainz Jr behind him.

"I was confused because I got that message that they won't overtake," said Ricciardo.

“Through my head I thought, 'That seems okay,' like I guess, fair, because Lewis had such a lead and Max has newer tyres, in this way he has to cut through a few cars if they're going to restart the race. 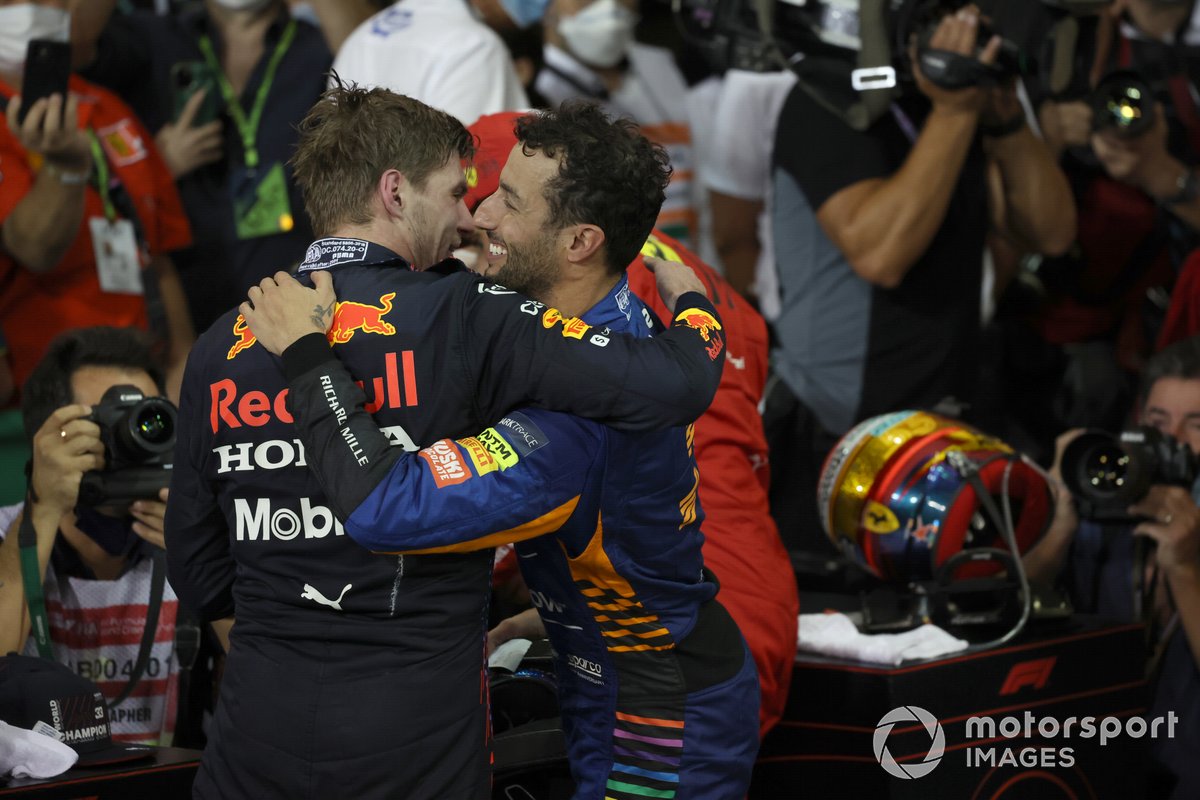 "So I've literally got front row seats for the last lap. And I'm also on a new soft, or a newer soft, so I was like, 'Do I pass both of them?' Nah, just kidding.

"I'm honestly a bit speechless, I don't know what to make of that. I really don't. I need to see how it all came about."

Sainz finished third, leapfrogging Norris and team-mate Leclerc in the standings to finish fifth in the points, but only just held on from Yuki Tsunoda's AlphaTauri.

"It was certainly a very strange situation for me," said Sainz.

"Because I was obviously battling for a podium with Valtteri [Bottas] and some AlphaTauris behind with a medium tyre, while I was on a very used hard.

"At the beginning I was told they were not going to be allowed to unlap themselves, the people in front of me.

"Then it was decided to unlap themselves, and some people unlapped themselves, but there was still, I think it was an Aston Martin [Stroll] and a McLaren of [Daniel] Ricciardo, between the two leaders and myself.

"And this I’ve never had before, having to restart the race with these two guys in front of me, and while fighting for a P3.

"I do believe it was a strange one, and maybe something to look at because it was very strange to see, and it nearly cost me my podium, to be honest."