Polesitter Russell powered clear at two safety restarts to avoid a battle with his team-mate, who he was free to race, as Hamilton recovered from his fall to eighth after tangling with 2021 rival Verstappen in what was an action-packed penultimate round of the campaign at Interlagos.

With Red Bull’s day getting worse when Sergio Perez was stuck on the wrong tyre for the final stint, Ferrari capitalised to take third and fourth - Carlos Sainz heading Charles Leclerc despite the Monegasque arguing for team orders to secure second in the championship.

Similarly, despite instructed to do so, Verstappen appeared not to hand back position to Perez on the final lap to head a Red Bull 6-7.

The Mercedes launched strongly to hold the lead as both Red Bulls came under considerable threat from Lando Norris at the start, who launched past medium-tyre starter Leclerc for fifth.

Perez ultimately had the McLaren covered as Russell ran well clear of his team-mate, who in turn had plenty of breathing space over Verstappen before a first-lap safety car.

Sensational qualifying topper Kevin Magnussen, who had fallen to eighth in the sprint race, appeared slow off Turn 7 and was nicked in the right-rear by the chasing Daniel Ricciardo. 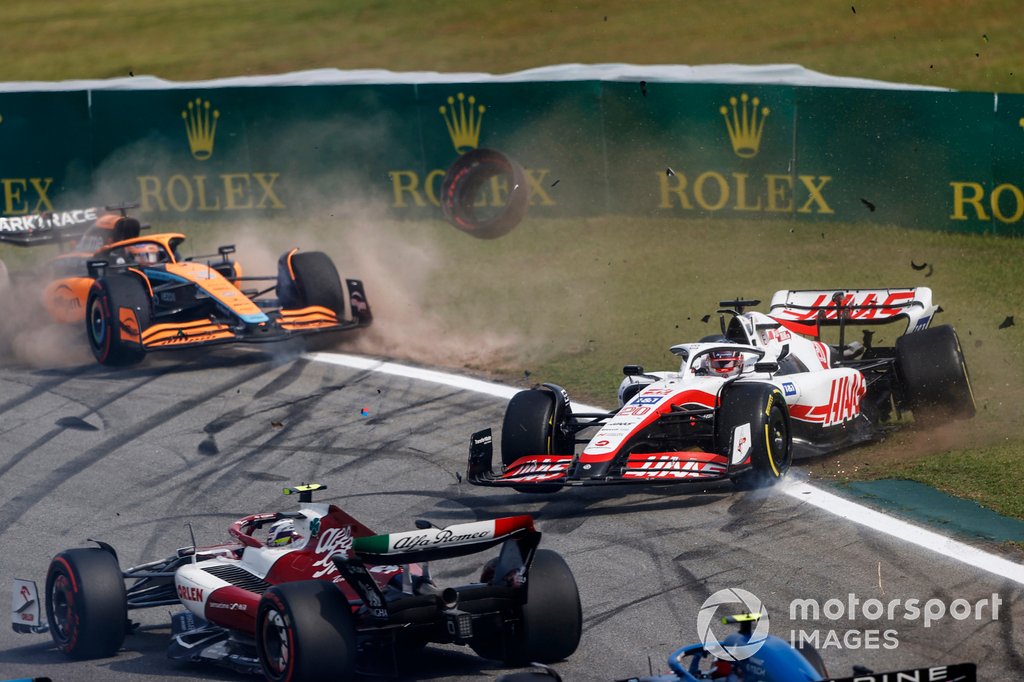 That pitched his Hass machine into a spin and as Magnussen rolled back, he thumped into the Australian - who is without a front-line drive for 2023 - to pitch him into the tyre barriers.

After the protracted clean up, green flags returned at the end of lap six of 71 but Russell held the restart until he was level with the pit entry and then floored it clear of his team-mate.

The Red Bulls reacted well to give Verstappen an opportunity to take second on the outside of Turn 1 but as the track snaked right, he made contact with bitter 2021 title rival Hamilton.

Both took to the runoff. Verstappen came off worse with front wing damage and pitted for mediums, while Hamilton stayed out but suspected floor damage as he dropped to eighth.

The stewards deemed Verstappen to be more at fault and awarded him a five-second penalty.

Then Leclerc was in the wars when, attempting to pass Norris through Turn 7, the McLaren MCL36 understeered into the side of the Ferrari to send it spinning into the outside barrier.

Leclerc was able to resume to prevent a second swift safety car and stopped for mediums, while the stewards also handed Norris a five-second penalty in a much less debatable call.

All this drama left Russell to lead Perez by 1.6s as Sainz was a further 3s in arrears ahead of Norris, ninth-starting Sebastian Vettel, Gasly and the remaining Haas of Mick Schumacher.

Hamilton was on the move again, picking off Vettel through the middle sector and then using DRS to demote Norris into Turn 1 for fifth, which became fourth when Sainz was forced to pit on lap 18 for soft tyres after a visor tear-off caused his right-rear brake duct to catch fire.

Russell, meanwhile, was content on his C4 softs and instructed the pitwall to leave him out as he built a 3.5s gap to Perez while Hamilton was closing on the Mexican by 0.4s per lap. 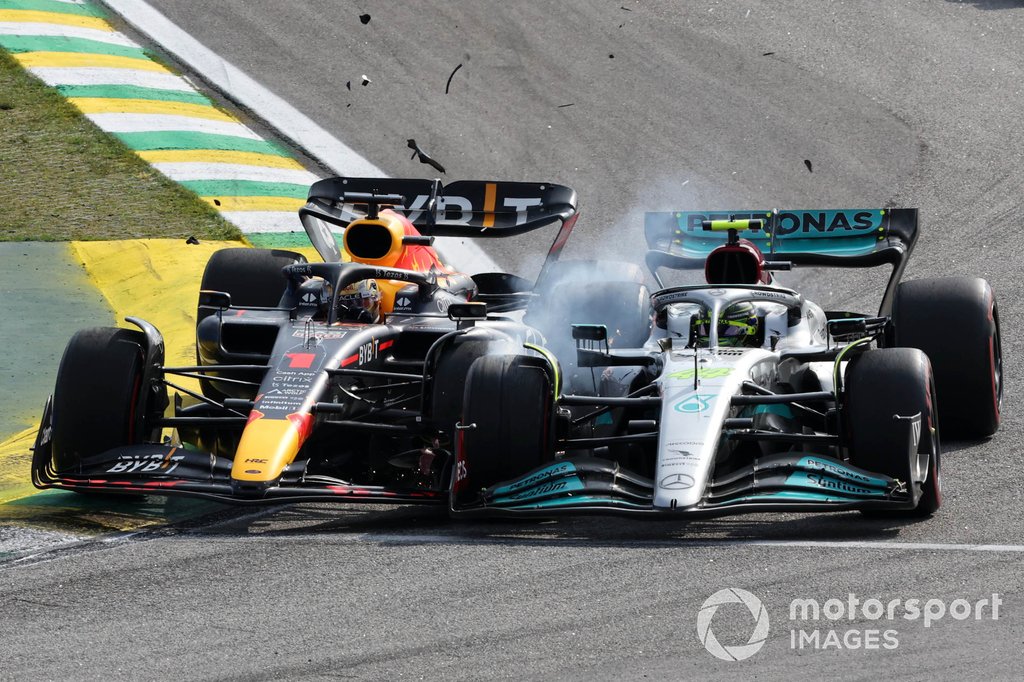 Red Bull responded with a lightning 2s pitstop for Perez as he was swapped to mediums but re-joined behind Valtteri Bottas and was hugely delayed by the Alfa for the rest of the lap.

Mercedes reacted by calling in leader Russell next time around on lap 25 for his switch to mediums, which placed Hamilton on his starting soft tyres into the lead by just over 10s.

But with the seven-time champion a second per lap slower than Russell, he was pitted on lap 30 for a 3.3s change to mediums. Hamilton resumed in fourth, 8s in arrears of Sainz’s F1-75.

As the temperatures dropped, the Mercedes pair seemed to come alive on the medium tyre. Once Sainz pitted again for mediums to undercut Perez, Russell was lapping 0.6s faster than the Red Bull (to lead by 8s) and Hamilton 0.8s quicker to close to within 2s come lap 40.

A sterling run through the first sequence gave Hamilton a run at Perez into Turn 4 on lap 44. Perez had him covered initially but then equipped with DRS and a slipstream, the Silver Arrows racer out-dragged the Red Bull up the main straight to reclaim second position.

Red Bull pitted Perez for mediums on lap 48 and although he resumed in fourth, the powerful undercut forced the Mercedes team into action as both stopped for softs for the final stint. 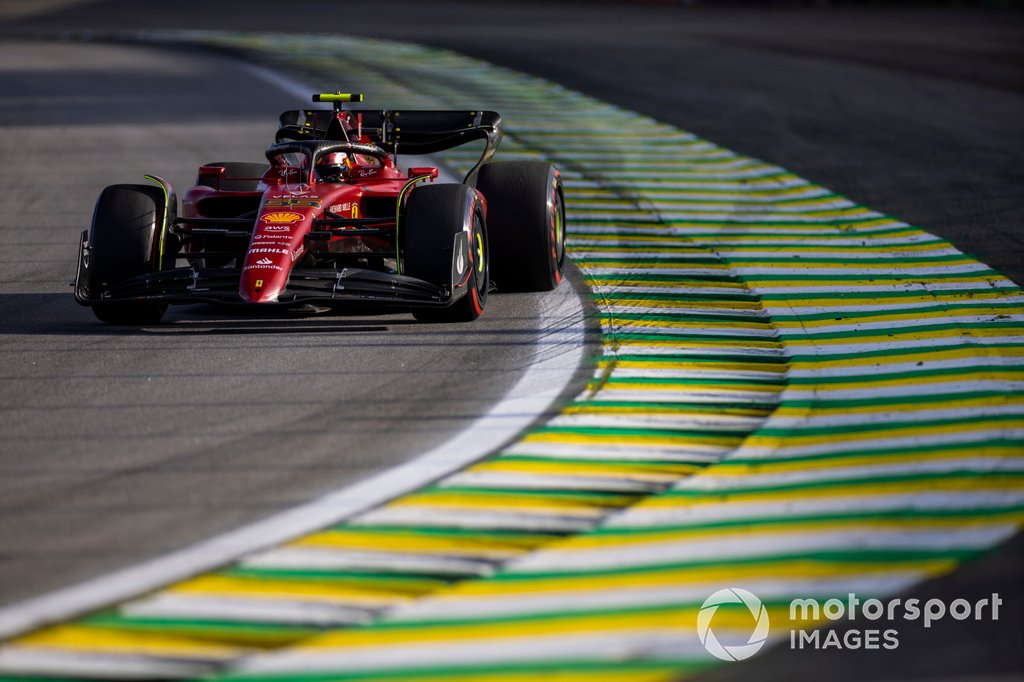 Hamilton notably protested the call before pitting and lost out to Sainz, whose mediums were now 12-laps old, as Russell re-joined a slender 1.1s ahead before a virtual safety car period.

McLaren recorded a double DNF when Norris parked up, which created a window for Sainz to come in for a cheaper pitstop and take on a set of scrubbed softs for the closing 17 laps.

Then the full safety car was deployed to close the field and, as per both Mercedes drivers’ comments pre-race, no team orders were imposed to leave Hamilton clear to race Russell.

Russell repeated his earlier work at the second restart by delaying his launch until level with the pit entry, with both W13s pulling clear of Perez, who had to robustly defend against Sainz until the DRS was reactivated and he passed for third on lap 63 down the back straight.

With the Red Bull preoccupied, Russell led his team-mate Hamilton home by 1.5s to secure his first grand prix victory as Mercedes finally got off the mark in 2022 with a 1-2 result.

Leclerc was able to demote Perez further with DRS to give Ferrari a somewhat flattering 3-4, while Fernando Alonso - rapid in the final stint to pass his feuding stablemate Esteban Ocon, Bottas and Vettel - added to the Red Bull pain as he snared fifth six laps from the finish line.

On his inferior mediums, Perez did not fight Verstappen into Turn 1 as the RB18 pair walked away with sixth and seventh ahead of Ocon, Bottas, Lance Stroll and Vettel - the retiring four-time champion also suffering late on when shod with the unfavoured medium tyres.