Ferrari's Kimi Raikkonen believes the team will soon be an even bigger threat to Mercedes at the front of the field in Formula 1, following the Bahrain Grand Prix 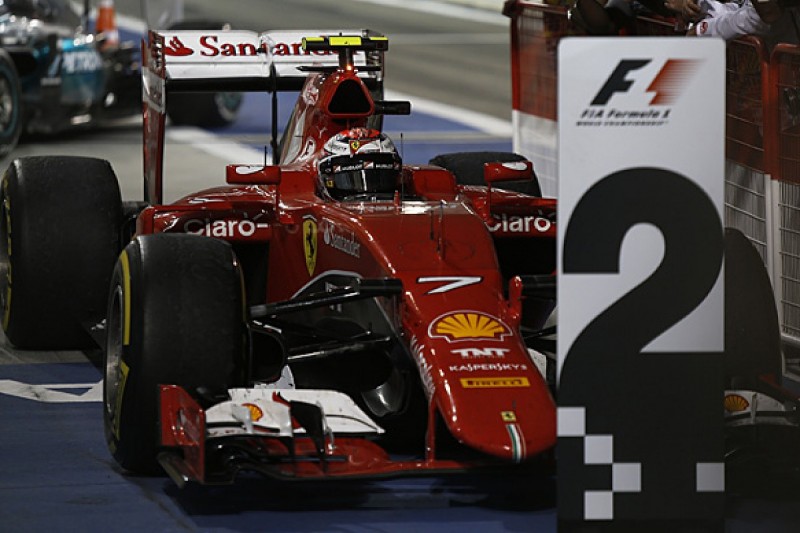 The Finn took advantage of an alternative tyre strategy to finish between Lewis Hamilton and Nico Rosberg at Sakhir on Sunday, coming home just three seconds behind the winner as Mercedes nursed brake problems at the end.

And Raikkonen believes that it will not be long before Ferrari is a genuine threat to Mercedes at every grand prix.

"We had decent speed today, I think we just have to keep working and improving the whole package," said the 2007 world champion.

"I'm sure we will get there and we can fight every weekend after that.

"I'm very happy with the team and I think many people didn't expect after last year that we would be in this position this early.

"We will start winning [more] races. We have to be patient and do the same work as we have done so far and we will get there."

Raikkonen added that Ferrari deserves credit for making gains in all areas following a disappointing 2014 season.

"The whole package has gone forward," he said. "A big chunk of it is the engine but you cannot give all the credit to them.

"The car has improved a lot, there's a lot more downforce, it's handling a lot better.

"All areas have improved, that is the key. People are working more closely, which has helped us get to where we have now."

During his strong stint on the harder medium-compound tyre, Raikkonen questioned Ferrari's decision to revert to the soft tyre for his final stint.

However, after reeling in the Mercedes drivers after his final stop, he admitted that the team had made the right decision.

"I think we had a few different approaches of how to run the race," Raikkonen said.

"On the medium tyre it was quite easy to catch up to them.

"In the end it was the right choice to go soft - we were much faster still.

"We did more or less the maximum we could have done, we had a pretty good race and hopefully we can have a few more."