The first one-hour practice session got underway in overcast conditions, with all the cars heading out in the opening minutes – the majority immediately running the prototype tyre compound Pirelli has brought to be tested this weekend, which features a stiffer rear sidewall.

Aston Martin’s Sebastian Vettel led the pack around to establish the first place benchmark at 1m12.697s on the unmarked test tyres, but that was soon beaten by the drivers running his wake.

Carlos Sainz Jr and Sergio Perez put a 1m06.941s and a 1m06.752s on the regular hard and soft tyres respectively – although those compounds are a step softer (C3 and C5 tyres compared to those used in last weekend’s Styrian GP at the same venue).

Pierre Gasly then popped in a 1m06.375s on the mediums tyres (now the C4), but this was deleted because the AlphaTauri driver had run too wide exiting the final corner and so Verstappen’s 1m06.640s was elevated to the top spit.

At the end of the opening 10 minutes, with the Mercedes drivers languishing at the rear of the field, their times three seconds off the pace as they completed their running on the prototype tyres on high fuel runs, Verstappen then set a new fastest time at 1m06.007s as he continued to lap on the softs.

The Red Bull driver then came in to switch to the test tyres, which he used to go quicker on a 1m05.558s just before the first quarter of the session was completed.

The test tyres were largely swapped out for the rest of the session – they can be used again in FP2 later on Friday afternoon, with the drivers required to complete a minimum of 12 laps each on that new construction, which is expected to make its race debut at the British GP next time out – and the Mercedes drivers returned to the track just before the half-way point on the softs.

Hamilton jumped up the order to go third, but caught a slower car at the final corners and lost time, as traffic also impacted his subsequent laps. 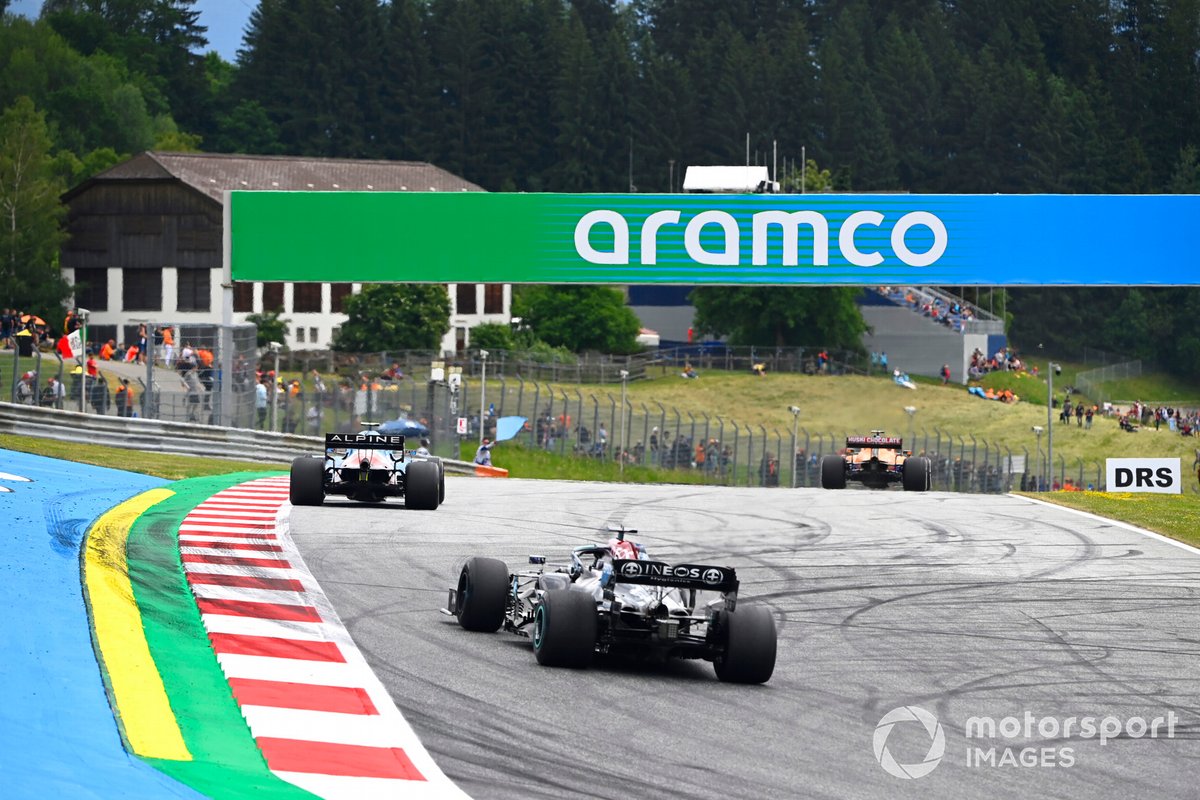 The world champion and Nikita Mazepin came close together at the uphill tight right of Turn 3 when Hamilton went for another run on the softs, which meant he backed off and attempted another flying lap immediately afterwards, during which he locked up by himself at Turn 3 and therefore abandoned that lap as well.

Hamilton did set a personal best during the later running, but ended up down in seventh and 0.566s off the top spot, while Verstappen used his flying run on the softs just past the halfway point to improve the fastest time to a 1m05.143s.

The Red Bull driver was followed in the timesheets by the Ferrari pair, who had both had moments at Turn 1 during the early running.

Sainz locked his left-front briefly on the approach to the uphill 90-degree right hander just before team-mate Charles Leclerc had a bigger lock-up with his right-front and went deep into the runoff – the Monegasque later having a near identical incident at the same spot.

Leclerc, who also locked his right-front and went into the runoff at Turn 3 late in the session, took the soft tyres to a 1m05.409s, which put him 0.266s behind Verstappen and just 0.022s ahead of his team-mate.

Valtteri Bottas had also risen up the order when he switched to the softs mid-way through the session, but he put in a personal best lap – again on the softs – with just over 10 minutes of the session remaining to take fourth on a 1m05.445s.

Yuki Tsunoda, who went off in the gravel behind Turn 5 during the early laps after dipping his left-side wheels in the gravel exiting the long Turn 4 right-hander, ended up fifth for AlphaTauri. 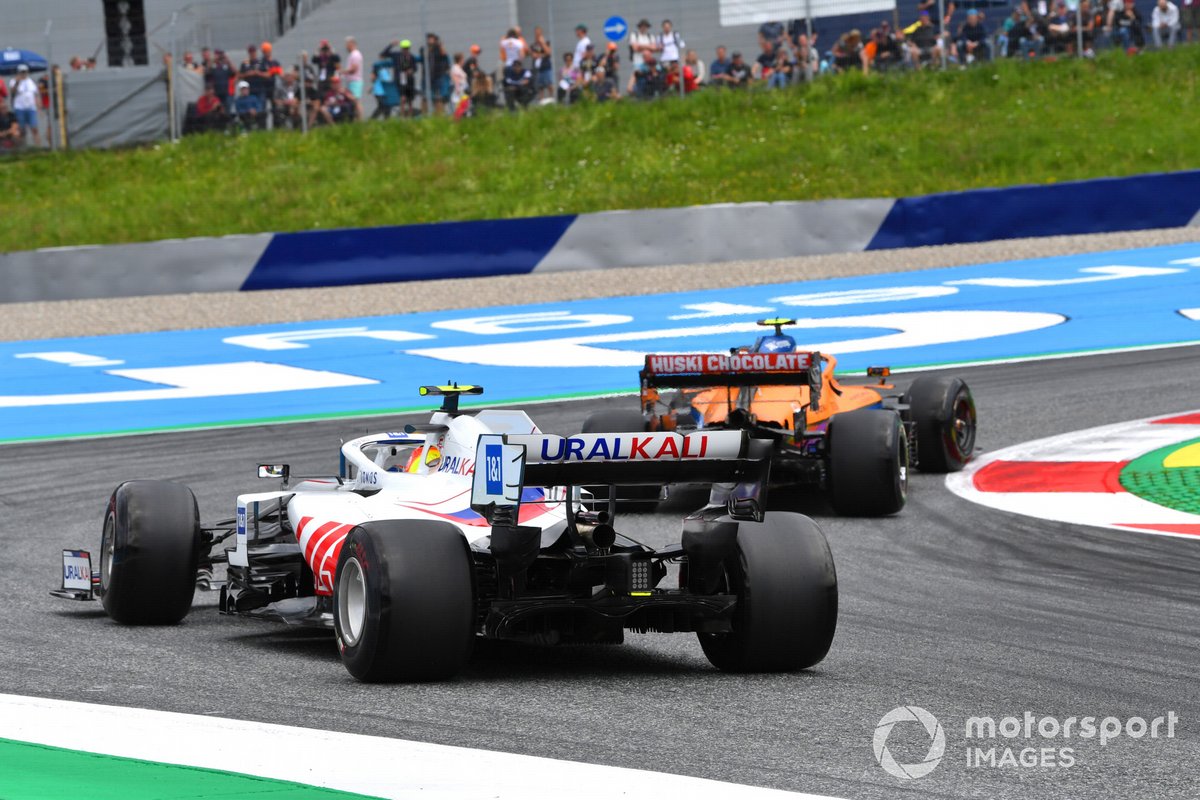 Norris was one of several drivers to take to the runoff at Turn 1, including Mazepin and the Mercedes drivers on a couple of occasions in the closing stages – with Hamilton suggesting he was struggling for tyre warm-up.

Lance Stroll had two high-speed spins – the first at Turn 6 after dipping his right-side wheels into the gravel trap that has been moved closer to the exit kerbs at that point for the 2021 Austrian races.

He speared off to the inside of the track and recovered from the grass, which was at the end of the opening 10 minutes of running, before losing the rear of his car at the final corner as he began a flying lap on the softs at the halfway point.

In the second incident, Stroll spun around after running over the Turn 10 apex kerbs and then lighting up his rear tyres as he put the power down – the Canadian later suggesting the tyres were not at the right temperature as he got on the accelerator.

Stroll was able to turn around and recover, later ending up 13th and two spots ahead of his Aston Martin team-mate Sebastian Vettel.

The Astons were split by Guanyu Zhou – running in place of Fernando Alonso at Alpine – while Callum Ilott and Roy Nissany took 16th and 18th for Alfa and Williams, the duo driving in place of Antonio Giovinazzi and George Russell respectively.