Verstappen’s advantage was so great that he had enough time to pit for a second time and put the fastest lap bonus point target out of sight for the rest, while Bottas benefitted from being allowed by Hamilton in a Mercedes team order and Norris got by too to claim a podium despite picking up a penalty for an early incident with Sergio Perez.

At the start, Norris got a slightly better start, which forced Verstappen to swing across from pole position and cover the run to the uphill right of Turn 1, where he consolidated first place and shot clear.

In the pack behind, Hamilton pressured Perez for third place at the long, downhill right of Turn 4, shortly before racing was suspended as the safety car was called out due to Esteban Ocon stopping with a broken right front on the run between Turns 3 and 4 after he was caught between Mick Schumacher’s Haas and Alfa Romeo driver Antonio Giovinazzi at the tight uphill right of Turn 3.

The race restarted on lap four of 71, where Verstappen waiting until he was well clear of the final corner before firing back up to full speed allowed Perez to get a run on Norris of the outside of the first corner.

The Mexican driver took to the runoff exiting the turn and dropped back behind Norris, with the Mercedes cars swarming as they shot back up to Turn 3.

Perez attacked Norris around the outside of Turn 4 but was edged out wide and into the gravel, for which the McLaren driver was later given a five second time addition, as the Red Bull fell to 10th and Hamilton and Bottas powered by.

Verstappen was 1.9-seconds clear at the end of the first full lap of racing and he quickly extended his lead to almost 10s with a string of fastest laps in the low 1m09s, as Norris repelled Hamilton’s attentions until lap 20. 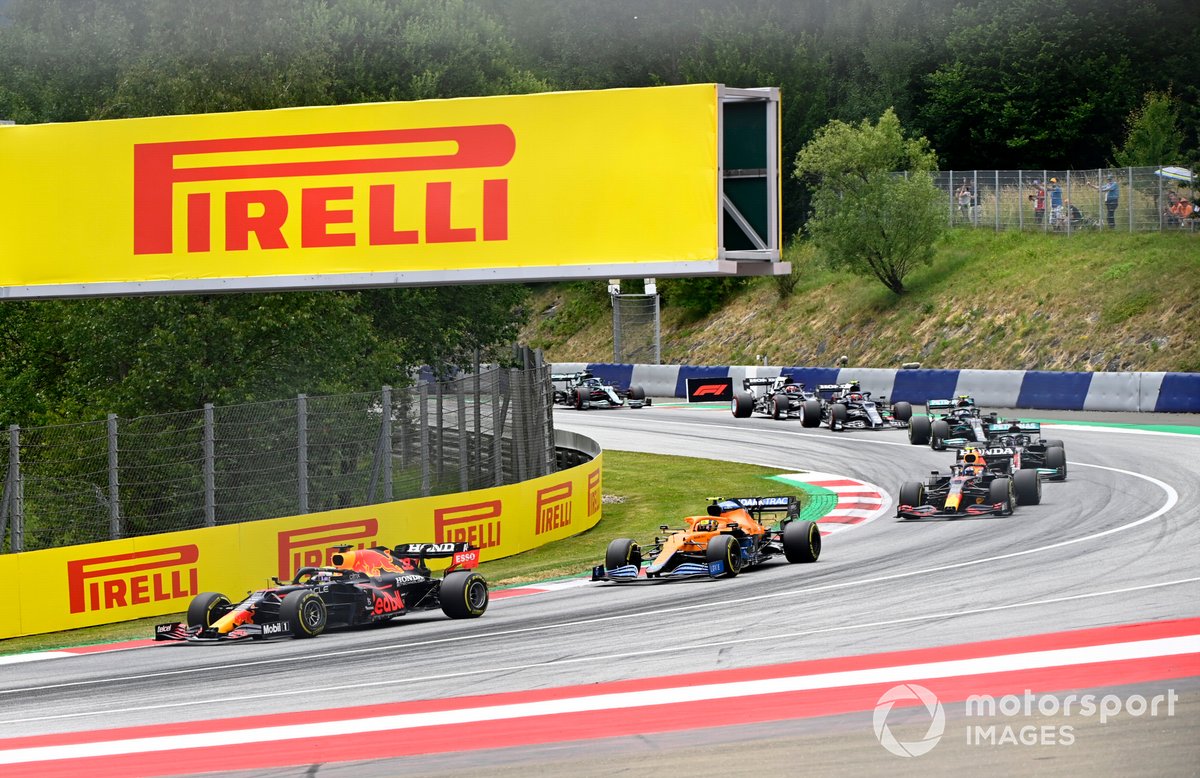 The Mercedes driver had closed in again after Norris initially kept him at bay despite McLaren’s concerns that his pace in the mid 1m09s was hurting his left rear tyre, and Hamilton got by using DRS to blast ahead on the run down to Turn 4, after initially attacking at the outside of Turn 3.

Verstappen continued to extend his lead to over 12s by the time Hamilton pitted at the end of lap 31, where the Mercedes switched from the mediums to the hards, which Red Bull did for Verstappen the next time by.

After emerging comfortably in the lead, Verstappen continued to build his gap at the start of the second stint, which quickly became a considerable advantage as Hamilton began to struggle for rear grip as a result of damaged sustained to the left-rear aerodynamic surfaces of his car, which Mercedes suggested to Bottas was due to running over the kerbs exiting the final corner.

As Verstappen stormed clear to a lead of over 23s, Hamilton came under pressure from Bottas, who had jumped ahead of Norris when the McLaren driver served his time penalty when the pair stopped for hards the lap before Hamilton.

Mercedes initially ordered Bottas not to attack his team-mate whole the situation was reviewed, but as the final 20 laps began the Finn was told he was free to race, with Norris looming just over a second behind.

Then Mercedes decided it would swap the order of its cars, with Hamilton allowing Bottas to the inside of Turn 3 on lap 52, while Norris closing on the world champion as Bottas ran clear.

Norris attacked Hamilton two laps later with a look to the outside of Turn 4, but was denied there before he nipped ahead at the inside of the fast, sweeping left of Turn 6 to rise back to a podium position, with Hamilton then pitting for a second time at the end of that tour. 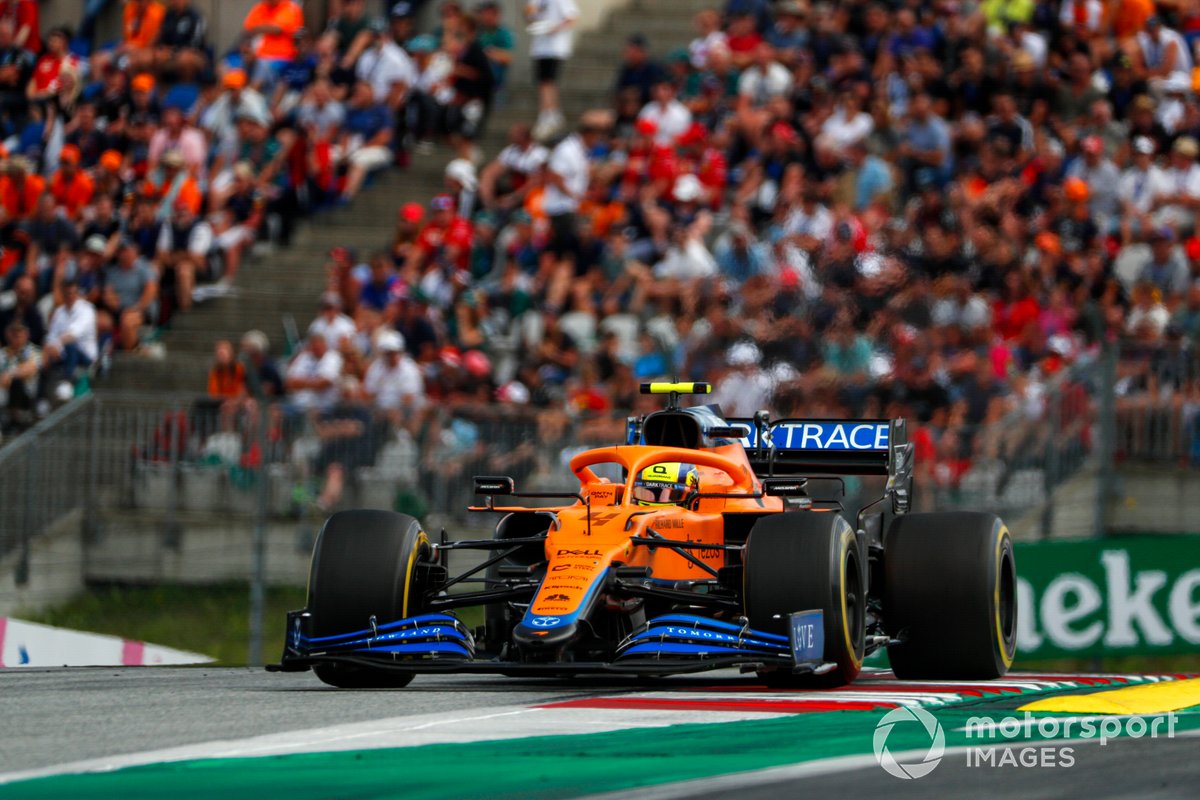 Red Bull called Verstappen in for a second stop at the end of lap 60, with the Dutchman taking them to the fastest lap on a 1m06.200s – having already held the accolade even before his second stop during a brief exchange of times with Carlos Sainz Jr and Hamilton just before coming in for his second set of hards.

Norris chased Bottas to the end, but wound up 2.0s behind, with Verstappen enjoying a final winning margin of 17.9s.

Hamilton came only a lonely fourth, ahead of Perez, who took fifth on the road but ended up sixth after picking up a pair of 5s penalties for twice clashing with Charles Leclerc in similar circumstances, and on the first occasion at the same place, as his incident with Norris.

The second incident between Perez and Leclerc happened with the Ferrari attempting to go by around the outside of Turn 6 before he was edged into the gravel, after which Perez ran clear and passed Daniel Ricciardo.

Perez tried to build enough of a gap to hold onto fifth despite his time additions come, running reasonably close to Hamilton by the finish, but Carlos Sainz Jr’s late charge after running long on the hards from 10th of the grid meant he was just within the 10s margin to claim fifth at the flag.

Sainz had been allowed past Leclerc after the Monegasque driver had failed in several bids to pass Ricciardo, with the McLaren driver taking seventh and Leclerc eighth.

Pierre Gasly was the lead two-stop runner in ninth, while Fernando Alonso took the final point to deny George Russell, who had lost several places on the opening lap having started eighth.

Russell resisted for several laps in a thrilling duel before Alonso got by with three laps left – using DRS to get the inside of Turn 4 after going deep defending at Turn 3. 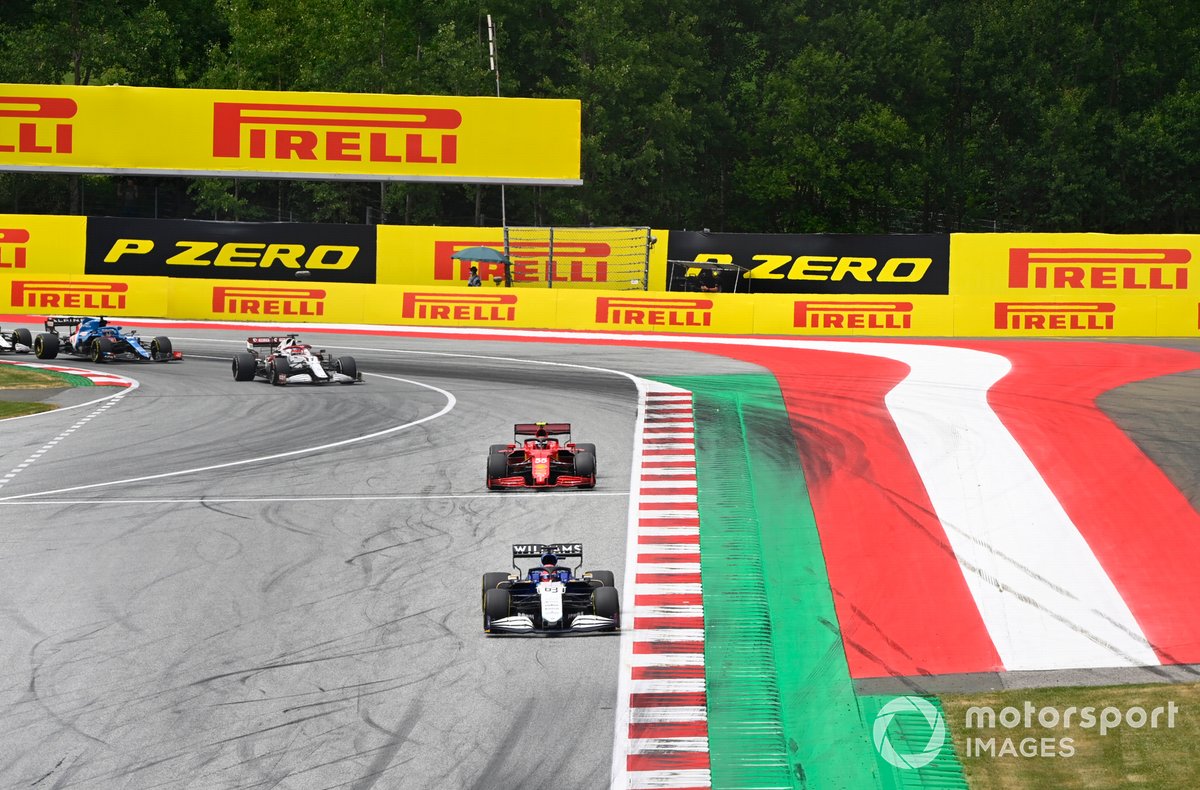 On the final lap, Russell’s 11th place was also under threat from Kimi Raikkonen and Sebastian Vettel, who was also charging on a two-stopper.

When Russell and Raikkonen locked up at Turn 4, Vettel brought his Aston Martin alongside and ahead of his former team-mate, who ran into the German’s left-hand side as Russell ran clear.

Both Raikkonen and Vettel speared off into the gravel behind Turn 5, where they retired.