In the twice red-flagged opening session on a heavily revised and resurfaced Albert Park track, Sainz took advantage of a trip through the gravel for Leclerc to set the pace by over half a second.

The Spaniard romped to a 1m19.806s to unsurprisingly smash the existing lap record set on the previous configuration, a 1m20.486s as posted by Lewis Hamilton on his way to pole in 2019.

Sainz’s benchmark on a scrubbed set of softs arrived shortly after Leclerc had completed a practice start, only for the Monegasque racer to run well deep into Turn 1.

There he was forced to catch a potential spin and ran through the gravel to compromise his tyres and the following push lap, handing Sainz the initial advantage as Sergio Perez pipped Max Verstappen. 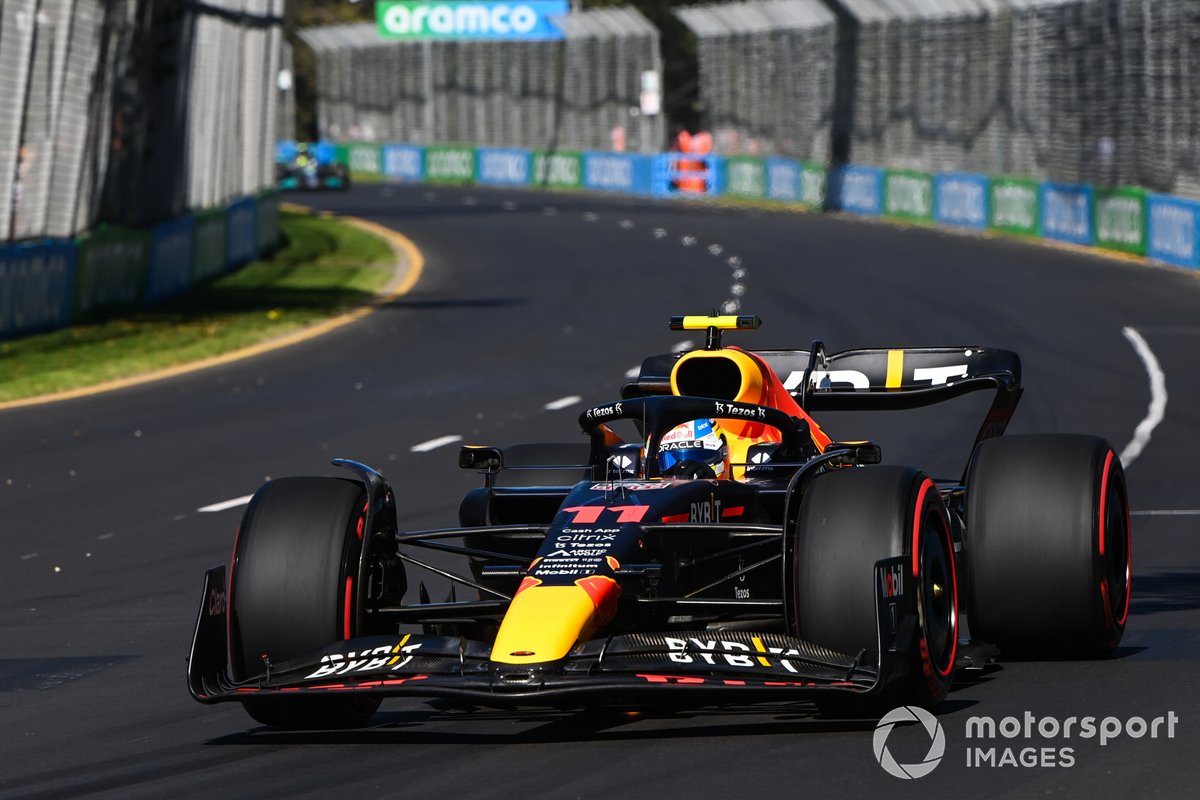 Perez had been the first driver to take to the temporary Melbourne street circuit, where in 2020 the race was cancelled late on amid what was then the outbreak and first wave of COVID-19.

The Mexican’s RB18 was sporting the C5 soft tyres and an aero rake behind the front axle to assess new wing endplates.

He was chased out the pitlane by Valtteri Bottas and a flurry of fellow C3 medium tyre runners, led by Lando Norris, Zhou Guanyu and the Aston Martins as Sebastian Vettel returns having missed the first two rounds in Bahrain and Saudi Arabia following his COVID case.

Norris became the early pacesetter as he was the first driver to post something in the ballpark of a competitive time, the McLaren driver chalking a 1m25.009s after four minutes of the hour.

He was swiftly joined by MCL36 team-mate Daniel Ricciardo, the Australian 0.13s adrift on home soil as Bottas crossed the line another six hundredths in arrears aboard the Alfa Romeo C42.

Verstappen then rose to the top of the timing screens as he initially ran with soft tyres fitted, like stablemate Perez, the Dutch racer clocking a 1m23.101s as Leclerc notched fourth on hard tyres.

But the Red Bull driver then hooked up the red-walled Pirellis to bolts some 1.4s clear, Verstappen dashing over the line in 1m21.625s after 11 minutes had passed.

Leclerc responded on the white-walled rubber, stopping the clock just three tenths slower before Verstappen found another half second and then a further two tenths next time around to whittle the benchmark down to 1m20.909s.

That placed him some nine tenths ahead of Norris, as Leclerc split the McLarens in third place.

Perez’s progress was interrupted when his car dropped some debris as he ran over the exit kerbs out of the final corner that triggered a brief 90-second red flag after 21 minutes so the carbon fibre could be cleared.

Sainz re-emerged on the hard compound to fall only 0.3s shy of Verstappen’s soft tyre run, while Vettel’s latest C5 effort was 0.7s adrift as he climbed to third over Perez and Hamilton.

Verstappen then embarked on another soft-tyre push lap to carve out a few hundredths, improving yet again with a 1m20.857s but was swiftly pipped by a 1m20.825s from Leclerc after 25 minutes - the points-leading Ferrari driver having switched to the optimum C5s.

As the Red Bull and Ferrari protagonists traded places at the top, Verstappen extracted a 1m20.626s from his car to move into first place before Leclerc fired back with a 1m20.377s to initially break the lap record. 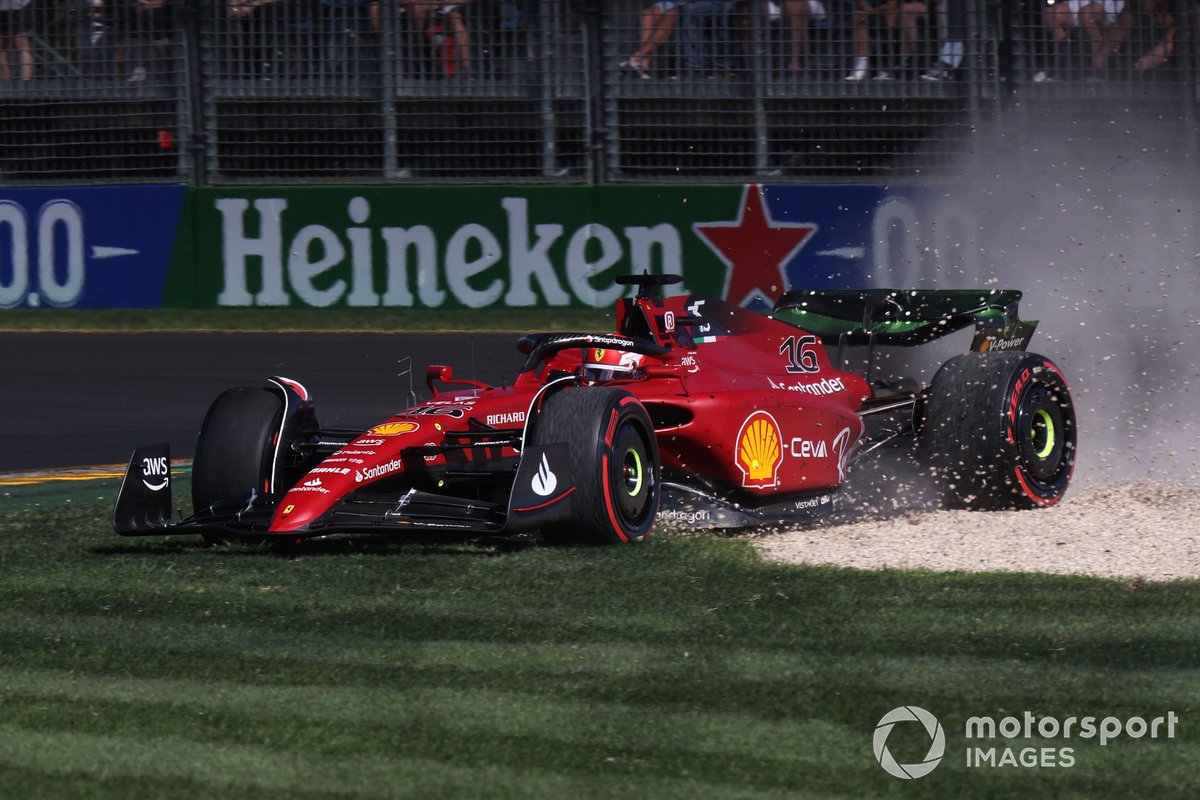 Sainz soon brought that down even further to a 1m20.325s, then Leclerc’s Turn 1 blunder paved the way for Sainz to improve his 1m19.806s yardstick without the fear of a reply from his rivals.

With Leclerc confined to his 1m20.377s before the Ferrari pair ended the session with a hard-tyre run, Leclerc again bouncing through the gravel, Perez nipped to third late on to lead the Red Bull attack albeit 0.5s off the pace.

Verstappen was fourth over Norris and Esteban Ocon, while Hamilton ran to seventh over Ricciardo and Fernando Alonso, the Alpine driver having got it wrong at Turn 3 to also hit the kitty litter.

Bottas rounded out the top 10 over AlphaTauri's Yuki Tsunoda and George Russell, while Vettel ended up 13th.

The four-time champion was forced to miss the final 10 minutes of the session, having been the cause of the second red flag.

He pulled up on the exit of Turn 10 and reported an engine issue as in scenes not dissimilar to the beginning of his car fire in testing at Barcelona, smoke wafted out the back of the Aston.

Vettel came under investigation at the end of FP1 after riding a moped on-track to return to the F1 paddock when the session had finished.

Haas’s early season promise only returned 18th and 20th. Kevin Magnussen had the measure of Mick Schumacher, despite the returning Dane suffering from nausea - not helped by running out of road at Turn 3 when he locked up and had to check his pace to keep the car out the wall.