Sergio Perez has received an eight-place grid penalty for the Singapore Grand Prix, leaving him slating "unfairness and inconsistency" in the Formula 1 regulations

Stewards gave the Force India driver a five-place demotion for "failing to slow sufficiently" under double yellow flags at Turns 9 and 10 after Romain Grosjean's accident during qualifying and a further three-place drop for overtaking Esteban Gutierrez under yellows at Turn 16.

Perez had qualified 10th prior to the penalty, and at present will drop to 18th. His final starting position is likely to alter with Grosjean poised to take a gearbox-change penalty after his accident.

The officials, including Mark Blundell as driver representative this weekend, felt Perez had ample opportunity to slow.

"The driver had two corners in which to slow down significantly and failed to do so, both of which were blind corners (including one where the accident had taken place and where the damaged car was still in the barriers) and where the driver would not have known if the track had a hazard wholly or partly blocking the track, and/or marshals were working on or beside the track," said the stewards' statement.

Explaining his side of the story, Perez told Autosport: "The driver I passed was driving unnecessarily slow.

"The stewards didn't even bother to ask him what were his reasons to be that slow.

"I don't know his reasons, whether he had a problem or whether he aborted the lap and so went so slow.

"I basically had to overtake safely, and I showed how much I braked, how much slower I entered that corner.

"There was a difference in speed because the corner before was green, and then you arrive into the yellow flag zone, and you see a car driving unnecessarily slow because he had aborted his lap.

"The rules say you have to show a significant lift, and it's what I showed." 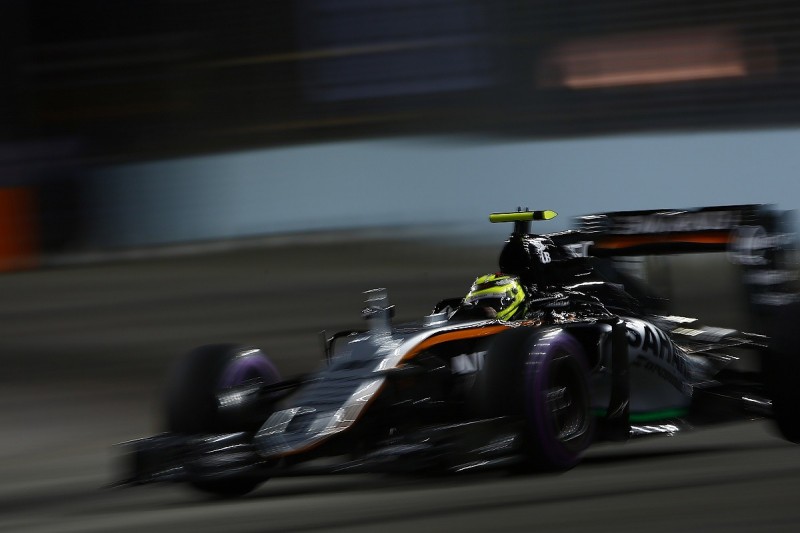 Perez claims he "lost six tenths" of a second, and feels the wording of the rules are unclear as the regulations state a driver must "reduce...speed significantly, not overtake, and be prepared to change direction or stop".

Earlier this year Mercedes' Nico Rosberg retained his pole position in Hungary after being investigated for failing to lift sufficiently under double-yellow flags after McLaren's Fernando Alonso had spun.

Regarding the wording, Perez added: "That's the problem, and an argument for the rest of Formula 1.

"If you leave it down to the stewards to decide then they normally go with their feel.

"From my point of view I did nothing wrong, there was nothing I could have done better, apart from aborting the lap, but that's not the rule, it's not what the rule says.

"If in the future you don't want to see penalties then you will have people aborting the lap, or driving extremely slow to make the people behind drive extremely slow and make it even more dangerous.

"We just see so much inconsistency and unfairness in the rules."