The Red Bull driver used his second and final run in Q3 to deliver a 1m08.885s yardstick at Zandvoort and Verstappen soundly hung on as Valtteri Bottas and Hamilton crossed the line.

Bottas was next to complete his flier but could only register a 1m09.222s to fall over three tenths adrift of his Dutch rival, while Mercedes team-mate Hamilton split the difference.

The seven-time champion completed a 1m08.923s to join Verstappen as the only other driver to dip under the 1m09s barrier, but he would wind up a competitive 0.03s in arrears.

Verstappen had initially been a full eight tenths clear after the first runs in the final portion of qualifying, his 1m09.702s pulling clear of Esteban Ocon and Fernando Alonso.

Bottas managed to depose the Alpines for provisional second before Hamilton nipped ahead of his team-mate by 0.04s, but was still seven tenths adrift of FP3 pacesetter Verstappen.

Verstappen swiftly improved down to a 1m08.923s on his next flying lap before teeing up his ultimate run for pole position.

Pierre Gasly guided his AlphaTauri to a fine fourth place, his final effort falling shy of Bottas by 0.25s as he completed the second row of the grid.

Charles Leclerc led an all-Ferrari third row as he pipped stablemate Carlos Sainz Jr, resuming after a sizeable shunt in final practice, by just one-hundredth of a second.

Antonio Giovinazzi progressed soundly into Q3 and snared seventh as the lead Alfa Romeo, while Ocon squeezed ahead of Alonso and McLaren’s Daniel Ricciardo completed the top 10. 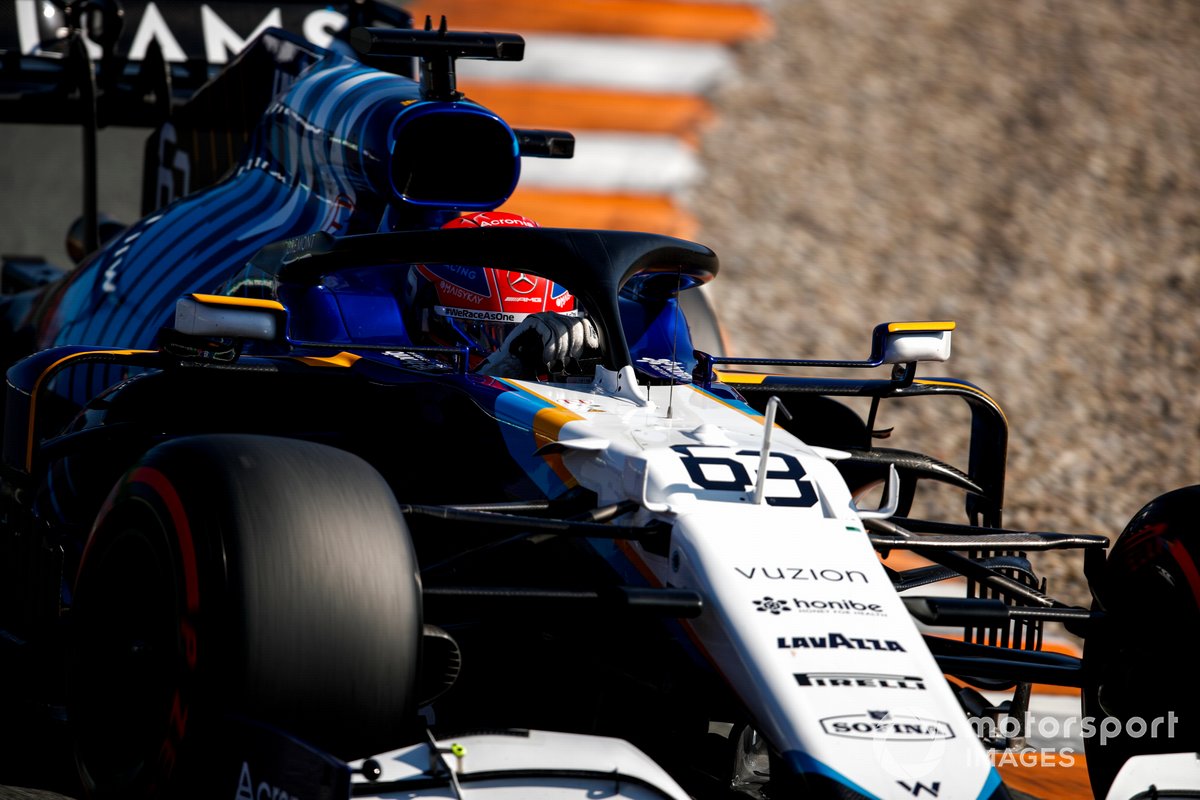 George Russell, after ending Q1 in 11th and while running in the same position in Q2, brought out the first red flag when he suffered from a snap of oversteer on the entry into the final corner.

Although he careered through the gravel as he spun, and the right-rear biffed into the outside TecPro barrier, he was able to immediately rejoin the track and recover the car to the pits.

The Brit, who scored a maiden podium at Spa, had set personal best first and second sectors but would not take part in the remainder of the session.

A potential decline down the order was prevented by his team-mate Nicholas Latifi creating a second red flag shortly after Q2 resumed following the 10-minute delay.

The Canadian, sitting in 14th, appeared to brush the grass with his front-left wheel as he reached the entry of the medium-speed Turn 8 right-hander.

As he passed a slowing Hamilton, who was positioned off-line on the inside, Latifi spun across the gravel and headed side-on into the outside barrier with three minutes to go.

The session would not be resumed, which left Verstappen’s 1m09.071s to head Leclerc by four tenths as Gasly ran to third on a 1m09.541s ahead of Hamilton and Bottas by 0.2s.

All drivers stuck to the softest C3 Pirelli tyre compound, which they will use for the race start, to reduce the risk of being eliminated by the considerable track evolution.

With no further times, Russell was the first driver to be eliminated, but held 11th, as Stroll and 13th-placed Norris could not complete their flying laps to fight their way into the top 10. AlphaTauri’s Yuki Tsunoda rounded out the top 15.

Leclerc had set the pace in Q1, his 1m09.829s effort creating a two-tenth cushion over team-mate Sainz, while Verstappen’s strong early banker of 1m10.036s kept him safe in third. 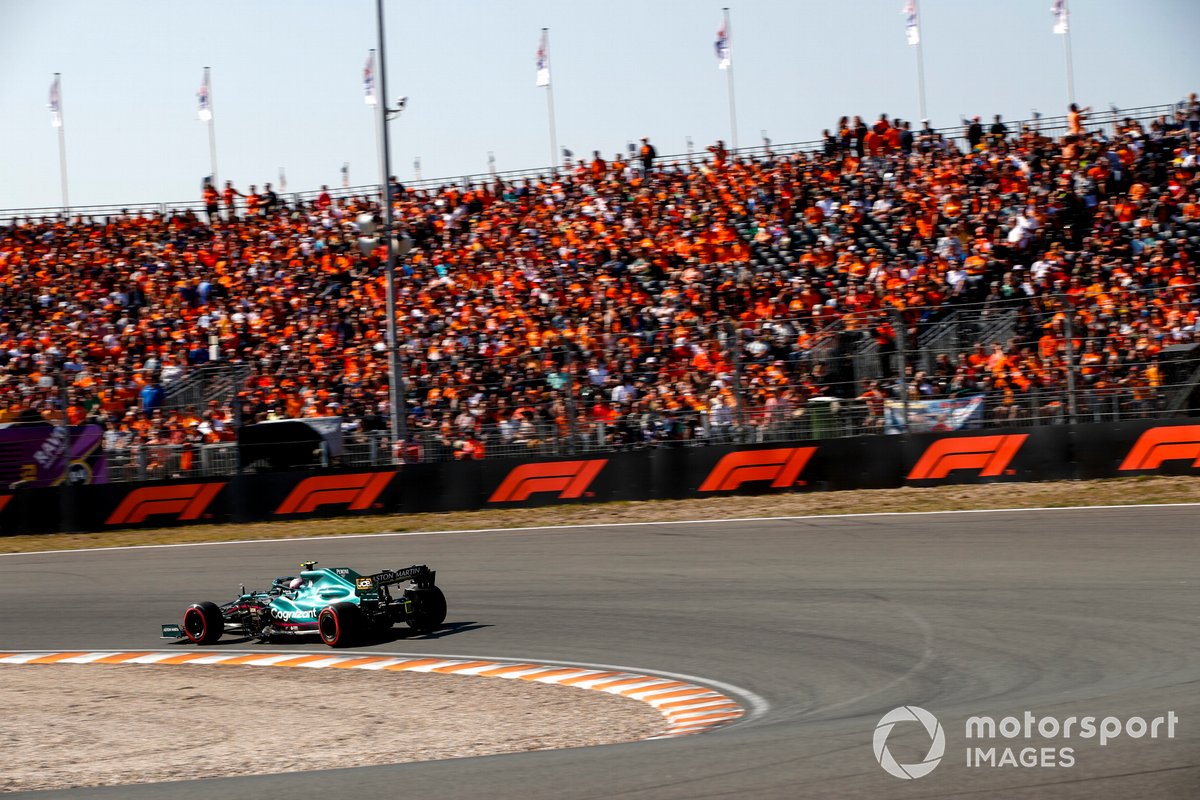 But his Red Bull team-mate Sergio Perez and Sebastian Vettel were the major casualties of the opening 18-minute leg, as both were eliminated in part due to traffic on their prep laps.

Late improvements for Stroll and Ricciardo left Vettel prey, and the Aston Martin driver had to abort his final flying lap when he came across the slow Haas cars.

Nikita Mazepin was on a cool down lap on the run to Turn 13 and he nipped past his slower team-mate Mick Schumacher when the Russian was informed of Vettel’s approach.

Mazepin had let Schumacher back past and then jumped on the accelerator and pulled to the inside, leading both cars to block Vettel, who would classify 17th as a result.

The late improvements of Ricciardo, Ocon and Stroll also meant Perez was bumped out at the first opportunity, his 1m10.530 lap missing the cut off by 0.07s behind Tsunoda.

Kubica, as in FP3, shipped several tenths into Turn 1 and struggled with tyre temperatures on his final run.

Schumacher found 0.5s over Mazepin as the pair of Haas machines formed the back row of the grid. Both drivers have been summoned by the stewards for the Vettel incident.