Formula E champion de Vries featured as Mercedes’ young driver for the test at the Yas Marina Circuit that was split between rookies in this year’s cars and current F1 drivers sampling the new 18-inch tyres in modified mule cars ahead of 2022.

De Vries set a fastest lap time of 1m23.194s in the final 30 minutes of the day, giving him P1 by over 1.3 seconds from AlphaTauri’s Liam Lawson, who enjoyed his first F1 outing.

F2 champion and Alpine reserve driver Oscar Piastri ended the day third-fastest, just 0.006s shy of Lawson’s time, while IndyCar race winner Pato O’Ward completed over two race distances en route to fourth place for McLaren, with the test being a prize for his first victory earlier this year. O’Ward had led the morning session for McLaren, but only shaved six-tenths of a second off his lap in the afternoon.

Both Bottas and Guanyu Zhou made their first appearances for Alfa Romeo on Tuesday. Bottas was given permission by Mercedes to take part in the test with his new team for 2022, and donned a plain white race suit for the running in the mule car.

Zhou finished the day fifth overall ahead  Red Bull junior Juri Vips, who caused one of three red flags that interrupted Tuesday’s running after spinning at Turn 14 and damaging his car.

Aston Martin simulator driver Nick Yelloly finished seventh ahead of Daniel Ricciardo, who was the leading driver in a mule car on the 2022 tyre compounds, finishing 1.6 seconds off O’Ward’s time in the unmodified McLaren that raced this year. Ricciardo caused the first red flag of the day in the second hour. 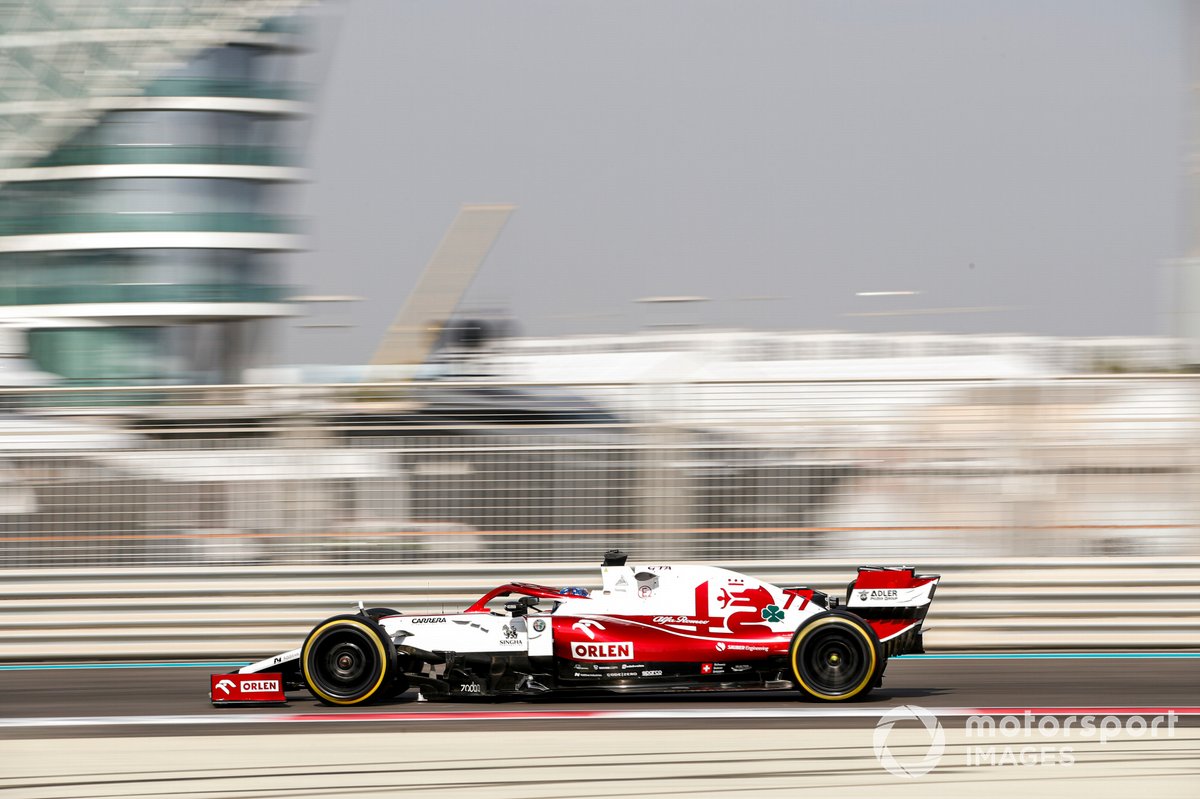 Lance Stroll finished ninth for Aston Martin, while Robert Shwartzman completed the top 10 after taking part in the afternoon session for Ferrari. He split young driver running with Antonio Fuoco, who also tested the mule car after Charles Leclerc featured in the morning, ending up 11th.

Bottas finished 12th ahead of Fuoco and Yuki Tsunoda, while Logan Sargeant enjoyed his first running in an F1 car with Williams finishing 15th. A power unit issue meant his day ended with almost 90 minutes to run, but the American nevertheless managed to complete his planned programme, racking up 92 laps.

Esteban Ocon finished 16th for Alpine ahead of Max Verstappen, who made his first appearance on-track as world champion for Red Bull. He was followed by George Russell, who is testing on both days for Mercedes in the mule car before joining the team full-time for 2022. Mick Schumacher propped up the running order for Haas in 19th place.

The final day of testing takes place on Wednesday in Abu Dhabi. As teams are only permitted to field a young driver on one day of the test, only Haas will run two cars tomorrow, running Shwartzman and Pietro Fittipaldi. Williams will not feature on the second day of testing due as it does not have a mule car.