Bottas caught Vettel as the Ferrari driver's tyres faded severely late on, but did not mount a serious attack despite being within DRS range heading onto the final lap.

Ricciardo retired from the race on lap two and, having watched the end of it from his hotel room, said he would have "at least tried" to overtake Vettel into Turn 1.

Asked by Autosport if he would have won in Bottas's position, Ricciardo said "yes", before adding: "Well I would have tried to win, definitely.

"Maybe in Valtteri's head he thought 'I'll get him in Turn 4' but for me the first opportunity you have to take. If you locked up and went wide, you're still finishing second. 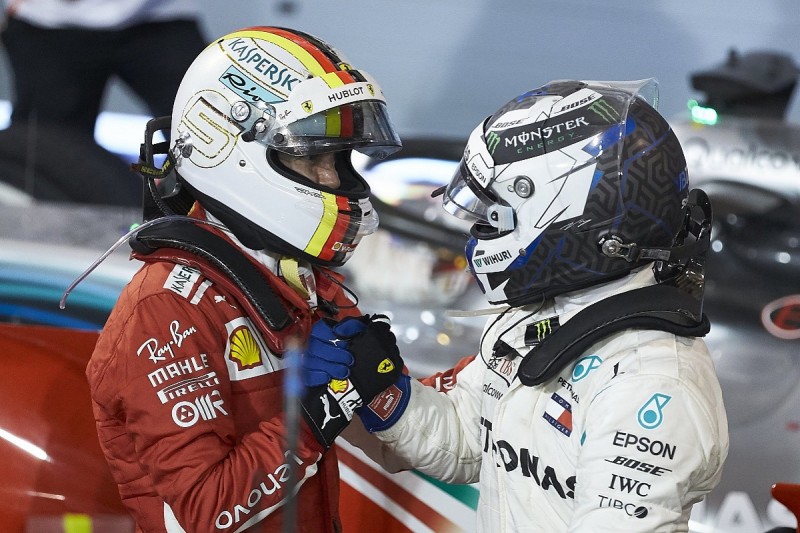 When asked in the build-up to the Chinese GP weekend how he dealt with suggestions he was not aggressive enough, Bottas claimed he was unaffected.

"I have reviewed everything, and if I could live the situation again, I wouldn't do anything different," he said.

"I'm fine with that and people can always say what they want."

Ricciardo said he did not have a perception Bottas was a soft touch when racing him.

"Honestly no," said Ricciardo. "My approach doesn't change. Whether it's a more aggressive driver or not, if I see the gap I go.

"I wouldn't say I change the approach, or he's a lot easier."

Ricciardo admitted he was too cautious early in his own F1 career, but said his graduation to Red Bull was the kick he needed to be more forceful in battle.

He earned his maiden grand prix win by catching and passing Sergio Perez and Nico Rosberg in Canada in 2014 and has since built a reputation as one of F1's most aggressive overtakers.

"The first few years of Toro Rosso I probably just lacked a bit of confidence, I was probably a bit too overwhelmed by F1 and put it on a pedestal," he said.

"As soon as I got to Red Bull I acknowledged it was my real chance. And my chance to create my reputation.

"I knew if the first season, or even the first few races, I was swamped by everyone, everyone would be like 'Oh he's the easy guy'.

"I was conscious of it, but I think it happened naturally."