Renault introduced a new engine for all six cars in Canada, but Monaco GP winner Ricciardo trailed team-mate Verstappen throughout practice, qualifying and the race.

He was able to beat Lewis Hamilton to fourth and finish one place and 12 seconds behind Verstappen, but said the new engine did not have a completely positive impact on his RB14.

Speaking to Sky Sports F1, Ricciardo said: "We had the upgrade this weekend and my car struggled more with the driveability, the calibration.

"It could have been better, let's say that. I was just struggling to keep the tyres under control with that driveability.

"I would say it explains some of the inconsistency.

"But also Max was driving really well all weekend, so I won't take that away from him."

Ricciardo had to use an older MGU-K this weekend after his component failed during his Monaco victory.

Red Bull opted to revert to one already in the pool instead of sacrificing a good starting position for a new part, which would have sparked a grid penalty. 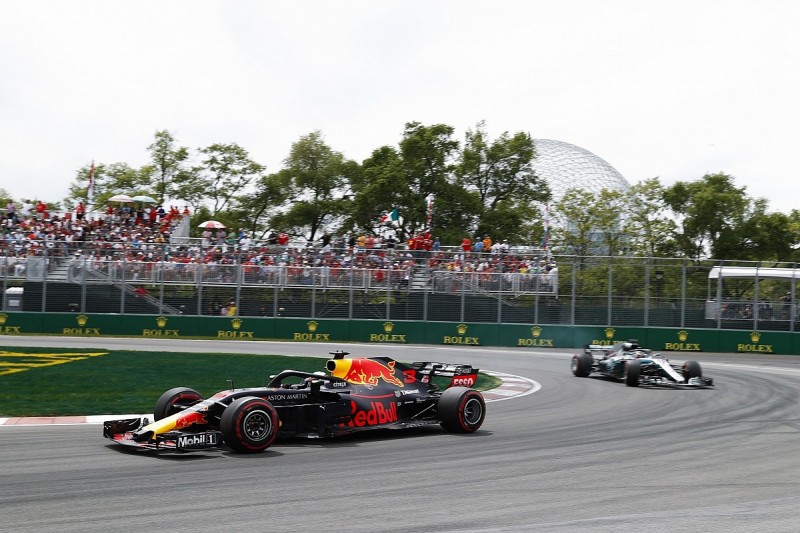 It paid off with Ricciardo's drive to fourth, which keeps him in a reasonable position as a title outsider even though he has dropped to fourth in the championship behind Valtteri Bottas.

He said he expected to be hit sooner rather than later with a grid drop but admitted he was "still not sure" when Red Bull would need a new MGU-K from Renault.

"I'm pretty happy we got through the whole weekend," Ricciardo said.

"We got some good points, I believe we gained two points in the championship because we got Lewis [who lost the lead to race winner Sebastian Vettel].

"We'll see what happens. It'll bite us soon, we'll try to stay on top while we can."

Ricciardo trails new championship leader Vettel by 37 points, having been 38 from the summit before the race when Hamilton was still on top.

He said that minor improvement is a small victory at a power-sensitive track that Red Bull expected to struggle at more thanks to its underpowered Renault engine.

"I'm relatively content for a fourth place," said Ricciardo. "We did all we could.

"For us to take a few points away is a little win, and gives us a lot of encouragement."