That left Mercedes almost a second clear of the best Ferrari and Red Bull could manage, as it gave its new-specification engine its debut in practice one.

The majority of the drivers completed their initial runs on medium-compound Pirellis but Mercedes opted to use soft tyres straight away.

That allowed Bottas and Hamilton to engage in a solo battle at the head of the times, lapping faster and faster across multiple flying laps as the track improved.

The final flying lap in Hamilton's first run marked the first time he hit the top of the timing screens, moving ahead of Bottas on a 1m13.148s.

Bottas quickly resumed control on a 1m13.001s, marking the end of that salvo between the team-mates as the first half of the session came to a close.

They continued to improve when the second runs began, with Bottas switching to a new set of softs and Hamilton opting for new mediums.

Bottas dipped below 1m13s for the first time on a 1m12.914s, but Hamilton eclipsed that by 0.15s despite harder rubber.

The Finn's session then ended slightly early when his Mercedes started to suffer from low fuel pressure.

Ferrari and Red Bull avoided the softest tyres throughout the session, but would have been dismayed to see the gap to Hamilton on the mediums.

Charles Leclerc rose to third on a 1m13.720s on his second set to head Ferrari's challenge, eclipsing the lead Red Bull of Max Verstappen by 0.035s.

The second Ferrari of Sebastian Vettel was slightly slower in fifth, not helped by running wide at Turn 1 on one lap and suffering a spin at the hairpin on another.

Vettel's errors were among many on Friday morning as drivers grappled with a dusty, low-grip circuit. 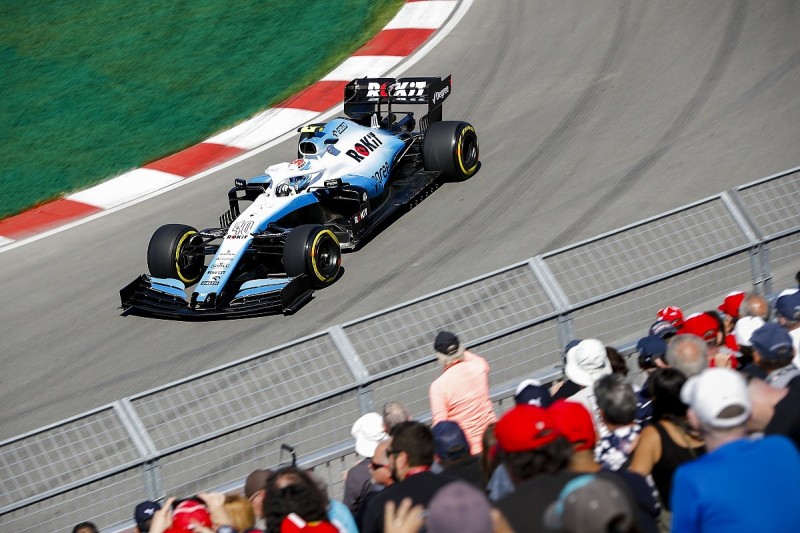 In his first GP practice session for Williams, Nicholas Latifi completed a long run right at the start of the session while the rest of the drivers remained in their garages, and had offs at the Turn 8 chicane and the hairpin.

Romain Grosjean had a spin at Turn 6 and went wide at Turn 8 as well, while Toro Rosso's Alex Albon mirrored Grosjean's Turn 6 moment himself.

Albon's team-mate Daniil Kvyat missed the final chicane while Pierre Gasly locked up and ran wide at the first corner.

The only incident with a major consequence was a spin for Antonio Giovinazzi at the Turn 8 chicane.

The Alfa Romeo driver ran deep, clipped the kerb and lost the rear, striking the wall with the left rear and forcing a virtual safety car.

It continues a difficult start to the season for Giovinazzi, whose team-mate Kimi Raikkonen was one of the stars of first practice as he set the sixth-fastest time.