Sauber Formula 1 rookie Charles Leclerc said he was surprised to outpace both McLarens in Canadian Grand Prix qualifying, having expected the outfit to lead the midfield

Leclerc made it to the second part of qualifying for the fourth time in a row on Saturday, and will start the race from 13th after outpacing McLaren pair Fernando Alonso and Stoffel Vandoorne in Q2.

He said he had not anticipated that result based on practice form, with at least one McLaren finishing in the top 10 in all three sessions.

"It felt great," Leclerc told Autosport of his qualifying performance. "A very positive day for us. Fourth Q2 [appearance] in a row, I could not be happier.

"I think we maximised the car we had. We had a very good balance, I'm very happy with the lap."

When asked if he expected to outpace both McLarens, he replied: "Not really, actually this is a bit of a surprise as we expected them to be on top of the midfield.

"For us it was quite clear they were on top of the midfield, but [in qualifying] they seemed to struggle a bit more, so it was a surprise to me." 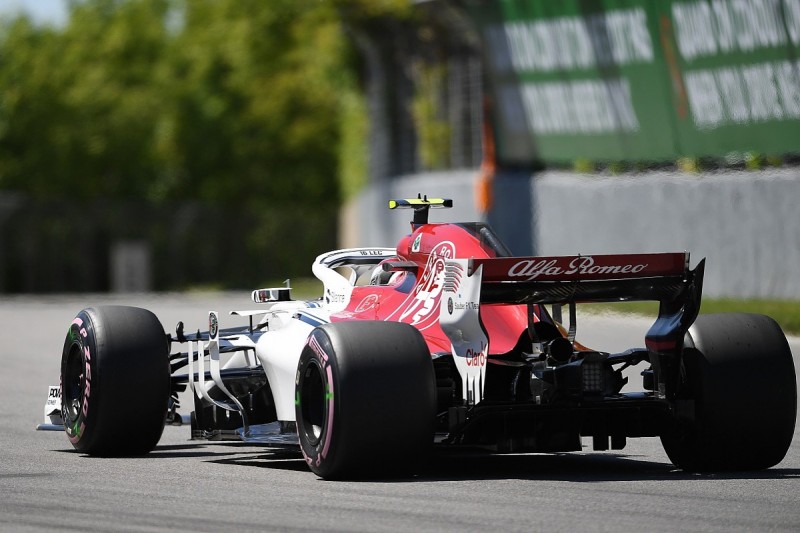 Leclerc believes the Montreal circuit has masked some of the shortcomings of his Sauber compared to rival teams.

"Our big defect for now on our car is the lack of downforce," he said.

"When we come to a track like this where we don't really need much, basically it takes off a little bit our defect, so it is placing us a little bit better.

"Hopefully we will improve on that matter and we can come back stronger on the tracks where we need a bit more downforce."

Leclerc feared he might struggle at a circuit he had never raced at before, and admitted to struggling with the proximity of some of the walls initially - including the infamous 'Wall of Champions' - but felt he had conquered the challenge by Q2.

"I was struggling a little bit before qualifying in the last corner, which is very tricky," he said.

"On my fast lap, I just went for it and thought 'if I go into the wall it's like this' but everything went well, so I'm pretty happy with my lap today.

"I expected a harder weekend as I didn't know the track in Montreal and it's quite tricky from what I'd heard and now what I've experienced.

"I'm even more happy about the performance we've had today considering I didn't know the track, and I definitely feel more confident in the car race after race."