Zak Brown believes that McLaren Formula 1 driver Lando Norris is “as fast as anyone on the grid” at the moment, acting as a “great bar” for new team-mate Daniel Ricciardo.

Norris has finished inside the top five at all but one race so far this season, scoring podium finishes at Imola and Monaco to mark his best start to an F1 campaign.

The 21-year-old’s efforts have helped lift McLaren to third place in the constructors’ championship ahead of Ferrari, while his points haul leaves him fourth in the drivers’ standings.

Ricciardo joined McLaren at the start of the year and has struggled to match Norris’s form thus far as he continues to get up to speed with the team, but managed to follow his team-mate home in sixth at Paul Ricard last Sunday.

McLaren Racing CEO Brown was sympathetic to the challenge that Ricciardo had faced when changing teams, particularly with the reduced testing opportunities ahead of the 2021 season.

But he was happy with how the Australian was progressing, and felt that Norris was a strong benchmark to have across the garage.

"We mustn’t forget, he had half the testing that we had this year, and we were still trying to learn the power unit in testing,” Brown said.

“So what we’re seeing out of Daniel is he’s getting quicker every weekend. His work ethic is great, his attitude is great, and he and the team are just working more closely together.

“So I’m extremely confident that he’ll get to his ultimate pace here shortly. I think adapting to a new car in a COVID era, where you have reduced testing, has certainly not made it easy on him.

“He’s got a team-mate who I think is as fast as anyone on the grid. So he’s got a great bar to race against." 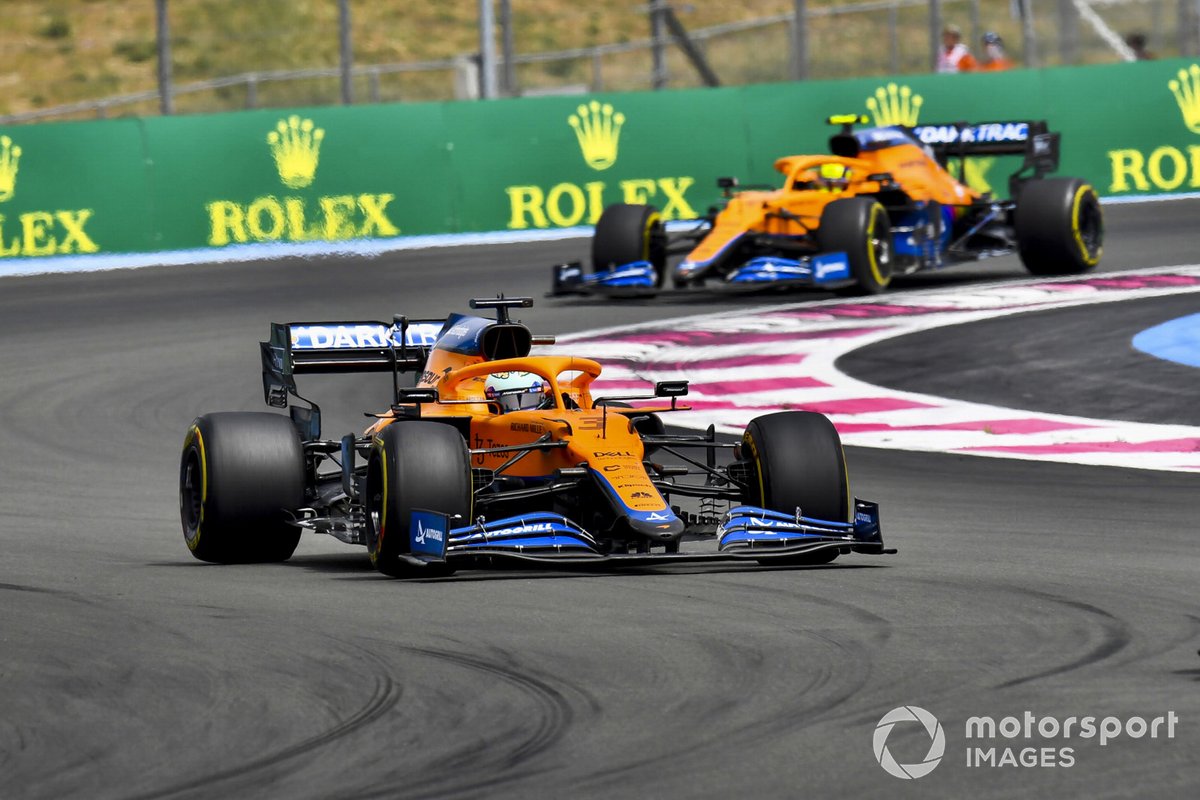 Norris made his F1 debut with McLaren in 2019, and is on course for his best season to date, sitting just 21 points shy of his points tally from last year with two-thirds of the season still to run.

“Lando has matured really well, he came in as a rookie, and already drove really mature,” Brown said.

“If you look at some of the other rookies that came in, they had a lot of accidents. While they showed speed, they got over the limit one too many times. Lando really hasn’t. He’s shown great pace and maturity from the word go.

“Then what we asked him to do last year and this year is to actually be a little bit more on the limit, to almost encourage, it’s OK if you go off every once in a while. And what we’ve seen is he’s sped up even more, gotten his elbows out, but he’s still keeping the car on the track, which is great.

“Now his mistakes are little track limits in Italy, when he was going to be P3. So he’s upped his aggressiveness, his starts, his first laps, but very much in controlled way.

“As you would expect in the first year, would sometimes take a little bit of time to learn the circuit, and the set-up, and would kind of follow Carlos [Sainz Jr]. Now what we’re seeing is Friday, first session, he’s on it right away.

“So we’re extremely happy with how Lando has performed, and we think he’s performing at a very high level.”