Bottas, who won the Austrian GP from pole last weekend, says a glazed front brake knocked his confidence in the wet conditions of qualifying on Saturday at the Red Bull Ring.

In Q3 he was 1.428s slower than team-mate Lewis Hamilton, who topped the times to claim his 89th poole position in F1.

The pair were split by the Red Bull of Max Verstappen and the McLaren of Carlos Sainz.

"It was not easy, I didn't look to be fourth on the grid but obviously tricky conditions can bring different challenges," the Finn told Sky F1.

"For me personally I don't think I managed to build enough temperature in the tyres, part of the reason was my front-right brake was glazing throughout the qualifying.

"So, I couldn't really maximise the potential of the car under braking, which is really important for the confidence in the wet conditions. It made it quite tricky and it's for sure disappointing." 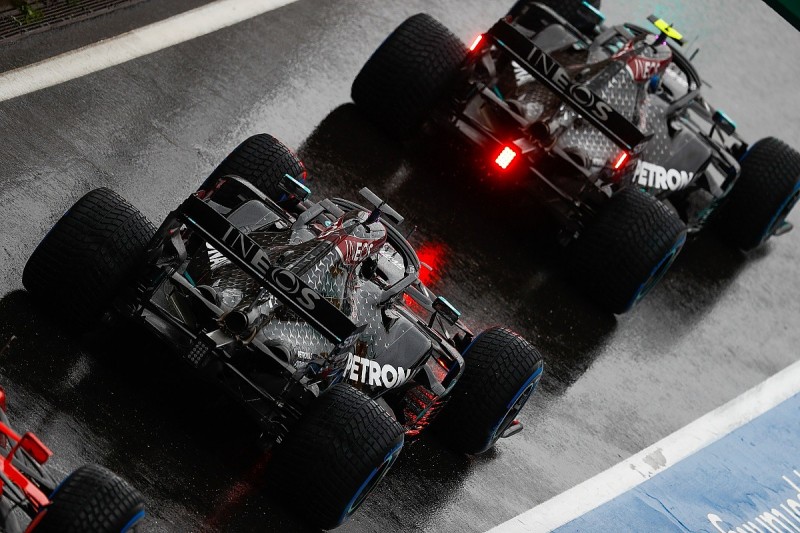 Bottas says he won't know until the race whether or not the team has been able to resolve the problem overnight.

"I really hope so, it would be nice to go flat out but it's something we're only going to find out tomorrow because we haven't done a race distance obviously in practice, but we know the car is quick so looking forward to it."

Mercedes trackside engineering director Andrew Shovlin confirmed that Bottas would have found life very difficult during qualifying due to the brake issue.

"Fundamentally he was struggling a bit with a split on the front brakes," said Shovlin. "One of them had glazed, and you end up with one that's working nicely, and the other one doesn't have a lot of friction.

"When you get that, and you're braking for a corner, you can't slow the car down because you've only got one of them working, it doesn't want to go in a straight line, and it's also hard to work the tyres.

"His feeling was that it was much harder when the water level was higher, but the problem is you can't work the tyres to get them in the window easily, and if they're not in the window, you haven't got the grip. And then that knocks on, and you can't get the lap time.

"And he had a snap at the last corner, and without that, he'd have been P2. So he was a bit disappointed. But I think we've got a good car in the dry, we've got people to go out there and race, and we're looking forward to having a bit of fun tomorrow."

Bottas was the quicker of the two Mercedes drivers overall during Friday's dry practice, with the Finn over six tenths clear of his struggling team-mate Hamilton.

Mercedes boss Toto Wolff admitted on Friday that the team was "in the dark" as to what Hamilton's problems were, claiming the car was "all over the place" in the slow and medium-speed corners.

Despite the torrential rain of Saturday, Sunday's inaugural Styrian GP is expected to be run in dry conditions.