Mercedes will give works drivers Bottas and Lewis Hamilton, plus its two customer teams Williams and Racing Point Force India, new engines for the first weekend after F1's summer break.

Bottas had already reached his seasonal limit for engine components after taking a fresh engine in Britain last month following a retirement in Austria caused by a hydraulic problem.

He will take a new internal combustion engine, turbocharger, MGU-H, MGU-K, control electronics and energy store for the Belgian GP.

That means an automatic back-of-the-grid start, with Bottas set to share the final row with Nico Hulkenberg as Renault will fit a complete new power unit on the German's car. 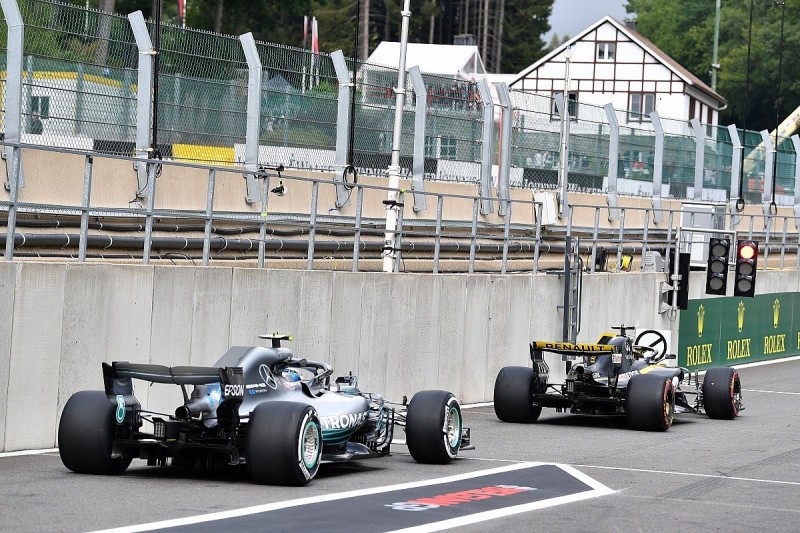 The consolation for both drivers is Spa is a less punishing place to take such a penalty as overtaking is easier than other circuits.

Hamilton had let slip on Thursday that he would use Mercedes' new engine this weekend, and the team has now confirmed he will get a new combustion engine, turbo, MGU-H and MGU-K.

His title rival Sebastian Vettel will also benefit from a new Ferrari engine this weekend.

Ferrari has confirmed Vettel and Kimi Raikkonen will take new combustion engines, while Vettel will also get a new turbocharger and MGU-H.

As well as Hulkenberg getting a complete set of components, the other Renault of Carlos Sainz Jr will benefit from a new combustion engine.

Stoffel Vandoorne's McLaren will also be fitted with a new Renault combustion engine, plus a new turbo and MGU-H.

Like Sainz's, Vandoorne's replacement V6 will be a new version of the previous specification, as Renault has not yet committed to introducing its final planned engine upgrade.