Hamilton led the way throughout free practice at the Yas Marina circuit, and was fastest in Q2 as well, but Bottas was fractionally quicker than Hamilton in Q1 and got back ahead during the first runs in Q3, taking provisional pole with a 1m36.231s lap.

That proved enough for top spot when neither Mercedes driver found time on their second runs, Hamilton falling short by 0.172 seconds.

Sebastian Vettel was third fastest in the best of the Ferraris, improving to a 1m36.777s best on his final Q3 run but ending up almost four tenths down on the Mercedes drivers.

Max Verstappen rounded out the top six, 0.353s down on Raikkonen.

Nico Hulkenberg's Renault was best of the rest in seventh, less than a tenth clear of Sergio Perez, who in turn was only 0.023s clear of team-mate Esteban Ocon.

Ocon was compromised by battling for track position with Bottas on their final Q3 out-lap.

Felipe Massa's Williams completed the top 10, 0.153s further back after only completing one run in Q3. 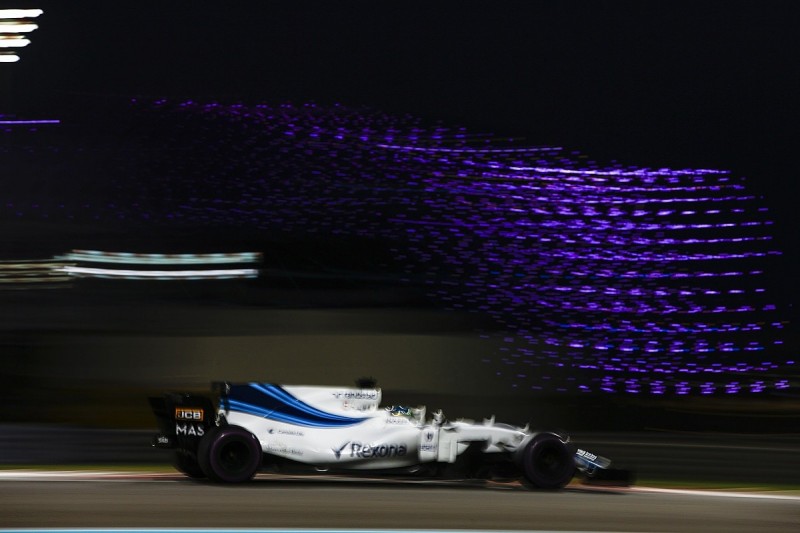 Massa was one of only six drivers to find time on his second run in Q2, which proved enough to bump Fernando Alonso's McLaren-Honda out of the top 10 by 0.071s.

Carlos Sainz Jr was another of those to find time after a "poor out-lap" ruined his first run. He got his Renault up to 12th ahead of the second McLaren-Honda of Stoffel Vandoorne, despite suffering a problem with his engine at the last corner.

Kevin Magnussen was 14th for Haas, almost half a second adrift of Vandoorne but well clear of the second Williams of Lance Stroll, who could not lap faster than 1m39.6s however hard he tried.

Stroll at least made Q2 for the eighth time this season, his passage from Q1 coming at the expense of Romain Grosjean, whose Haas missed the cut by just 0.013s as Stroll pulled the first of those 1m39.6s laps out of the bag at the end.

"Oh God that was everything!" said Stroll over the radio upon learning he'd made the top 15.

Pierre Gasly put the best of the Toro Rossos 17th, two tenths slower than Grosjean and two tenths clear of Sauber pair Pascal Wehrlein and Marcus Ericsson, who were separated by just six hundredths of a second.

Brendon Hartley qualified slowest of all by some distance in the second Toro Rosso. Porsche's World Endurance champion delivered a "scruffy" first lap, improved on his second run, but finished the session nearly half a second down on Ericsson.

Qualifying last negates Hartley's grid penalty for taking a ninth MGU-H on his Renault engine ahead of practice.