The Ferrari driver pipped title contenders Lewis Hamilton and Sebastian Vettel to top spot in the opening session, though had to use ultra-soft tyres to defeat the soft-shod Hamilton.

Force India's Esteban Ocon spent the opening half an hour of the session quickest, as he was the only driver to have completed a flying lap when Felipe Massa crashed after 15 minutes.

Massa ran wide across the gravel at the exit of Malmedy, the Turn 7 right-hander after Les Combes, and crunched the front-left of his Williams into the tyre barrier.

The session was stopped for 10 minutes and when running resumed Ocon's 1m48.962s was swiftly beaten by team-mate Sergio Perez and Raikkonen, before Daniel Ricciardo and Hamilton started posting more representative lap times.

Ricciardo made good use of ultra-soft tyres to post a 1m46.656s, but Hamilton soon made P1 his own.

He went quickest just before the 90-minute session's halfway mark on a 1m46.439s on super-soft tyres, and later went almost a second faster in the final half an hour on softs.

He had to abort his first flying lap on softs when Mercedes team-mate Valtteri Bottas suffered an odd trip into the gravel on the exit of the Turn 11/12 chicane before Stavelot.

Bottas appeared to be getting out of the way of a McLaren on the right-hand side and dipped a wheel off-track, which caused him to slide across the gravel and lightly bump the tyre barrier. 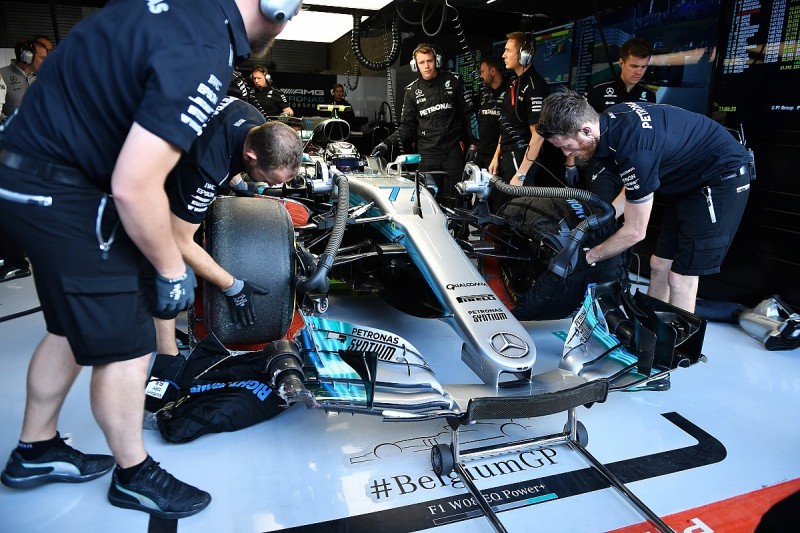 As Bottas slowly got his Mercedes out of trouble and back to the pits, Hamilton stayed out on the same set of tyres and pumped in a 1m45.555s to leap a second clear of Ricciardo.

Vettel made a late switch to ultra-soft tyres and fell a tenth short of Hamilton, but when Raikkonen made the same change with five minutes to go he edged ahead of Hamilton by 0.053s.

Max Verstappen used his ultra-softs to jump ahead of Ricciardo with 20 minutes remaining, as the Red Bull ended up 0.8s slower than Raikkonen.

McLaren driver Vandoorne joined Hamilton and Sauber's Marcus Ericsson in trialling the controversial halo cockpit protection device at the start of FP1, with Vandoorne and Hamilton returning to the pits at the end of their outlap while Ericsson continued onto a second.

The Spaniard is running an updated internal combustion engine this weekend, but he reported "no power" on his outlap and crawled back to the pits.

He emerged soon after the red flag and, despite his DRS shutting off "sluggishly", found enough reliability to set the 13th-fastest time.