After Sergio Perez led the way in the morning session, Raikkonen was able to displace the Racing Point driver at the top of the timesheet in the final hour of running.

Raikkonen set a time of 1m17.091s on the softest available tyre - C5 - with 45 minutes remaining, giving him top spot by two tenths of a second.

It capped off a productive day for Raikkonen, who racked up 134 laps in his first extended run in the new Alfa Romeo C39 car, having only previously driven it during the Fiorano shakedown last week.

Raikkonen later sparked the first red flag of 2020 pre-season running when his Alfa Romeo car came to a halt between Turn 8 and Turn 9 with 17 minutes left on the clock, effectively bringing the day to an early end - though running did resume with six minutes left of the clock.

Early pacesetter Perez failed to beat his morning benchmark after focusing on long runs in the afternoon, but still finished the day second overall ahead of Renault's Daniel Ricciardo.

Ricciardo completed fewer laps than any other driver after only featuring in the morning session, managing just 41 before handing over to team-mate Esteban Ocon, who finished 12th fastest, for the afternoon. 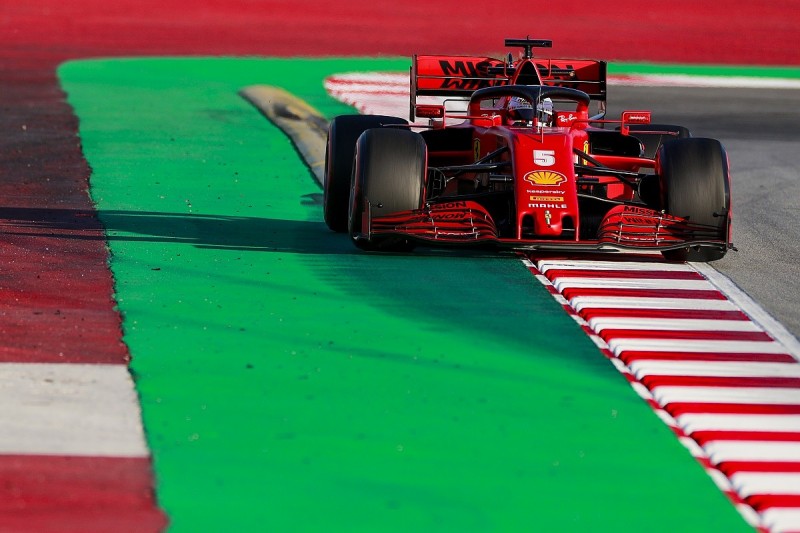 Charles Leclerc was less than two tenths behind Vettel in eighth, the pair split by Williams's George Russell, who continued the team's strong start to testing with 116 laps in the book.

Lewis Hamilton set Mercedes's fastest time of the day in ninth place, but his running was more notable for the first usage of the team's dual-axis steering (DAS) system.

Hamilton was spotted making adjustments to the toe angle of the front wheels by pulling the steering wheel towards his body during the morning session, sparking intrigue through the paddock.

Team-mate Valtteri Bottas took over in the Mercedes W11 for the afternoon, and was also seen using the DAS system.

Bottas added 77 laps to Hamilton's tally of 106 from the morning, though Mercedes' day was brought to an early end by an electrical issue.

Bottas propped up the timesheets in 13th place after focusing on long runs, with his day coming to an end with one hour left on the clock due to an electrical issue.

Lando Norris took 10th for McLaren ahead of Haas driver Romain Grosjean as both recorded more than two race distances through Thursday's running.

Grosjean had the biggest off on Thursday when he lost his Haas VF-20 at Turn 4 and went off backwards towards the tyre wall.

The right endplate on his rear wing was damaged after a small impact, but he was able to recover the car to the pits.

Friday marks the final day of running at the opening pre-season test, which starts at 9am local time at Barcelona.

Where the big three teams show their might at Barcelona