Kubica's best lap, a 1m16.942s, was set on the C5 tyres, the softest in Pirelli's pre-season selection, with Gasly ending up 0.598 seconds adrift on the slightly harder C4 rubber.

On another sunny day at the Barcelona track, McLaren's Carlos Sainz Jr was first out of the pits when the session got underway at 9am local time.

Lewis Hamilton and Ferrari's Sebastian Vettel swapped the top spot during the early installation laps, and continued to trade fastest laps throughout the first hour as they fitted the experimental Zandvoort-specific front tyres.

Pirelli has brought the new compound to the second pre-season test so it can collect extra data ahead of Zandvoort - which will have a new banked final corner - returning to the F1 calendar this year.

After fitting the C2 tyres, Vettel and then Hamilton brought the benchmark down to the low 1m18s range as the session approach the 90-minute mark. 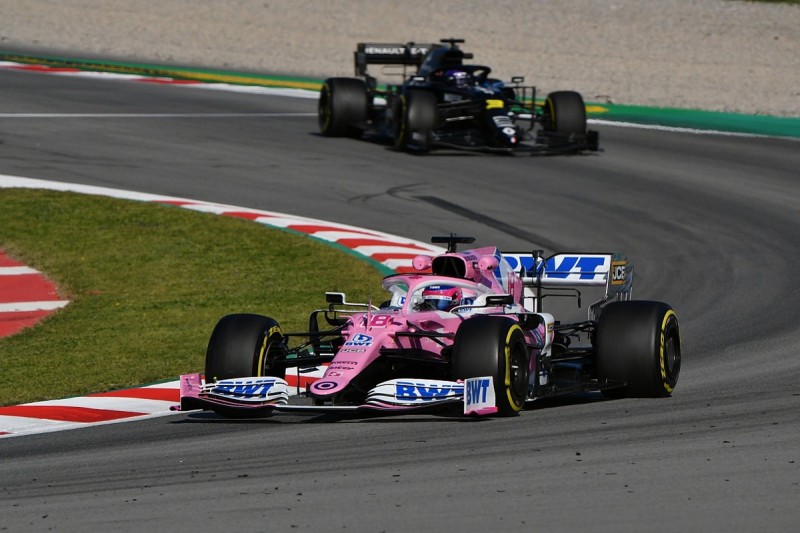 Racing Point's Lance Stroll then stole a march and moved to the top of the times with the first sub-1m18s lap of the second test - a 1m17.787s - on the yellow-walled C3 rubber.

Vettel caused the first red flag of the day when he went wide at the fast Turn 8 right-hander and lost the rear of his car, which put him into the gravel and into a half spin that became a full spin as he came back onto the track, scattering gravel that had to be swept away by the marshals.

Once the session got back underway, Hamilton reclaimed the top spot with a 1m753s on C2 tyres, despite making a slight error on the exit of the long, uphill Turn 12 right-hander.

Williams driver Nicholas Latifi caused the session's second red flag when he pulled over on the straight down to the Turn 10 hairpin with an engine issue.

When the FW43 had been recovered, the session resumed and Red Bull's Alex Albon and Gasly reappeared after logging no laps bar their initial install tours for nearly three hours - with Albon later explaining his delay was caused by a suspension issue.

As they began to add to what ended up as 29- (Albon) and 25-lap (Gasly) totals for the morning, Kubica fitted the C5s and set the session's best time with 40 minutes remaining.

Hamilton improved his personal best on the C2 to take second place as the session headed towards its conclusion before Albon slotted into second with just over 15 minutes remaining.

But they were both usurped by Gasly's 1m17.540s, which he set in the dying minutes of the morning.

Stroll ended up fifth, with Vettel sixth after putting 84 laps on the board for Ferrari - five fewer than Hamilton's session-high 89.

Daniel Ricciardo was seventh for Renault ahead of Sainz and Latifi, who did not reappear again after his stoppage. Romain Grosjean brought up the rear of the field for Haas.