Leclerc, replacing Kimi Raikkonen in the team for 2019, set the fastest time of the day in the morning session, and held on to complete his first full day in a proper session for Ferrari on top and having covered 157 laps.

He set a 1m18.247s on the C3 tyre, which narrowly missed out on his team-mate Sebastian Vettel's 1m18.161s, which the latter also set on C3s after conducting all of Ferrari's first day of running on Monday.

While Leclerc's day in the Ferrari was a success, Pierre Gasly - the other man moving to a frontrunning team for 2019 - had a disappointing end to his full debut with Red Bull, crashing at the long right-hander at Turn 12.

The rear-end of the car snapped loose at the corner entry, and the Honda-powered machine slid rear-left-first into the tyre barrier. The crash finished the day for the team. 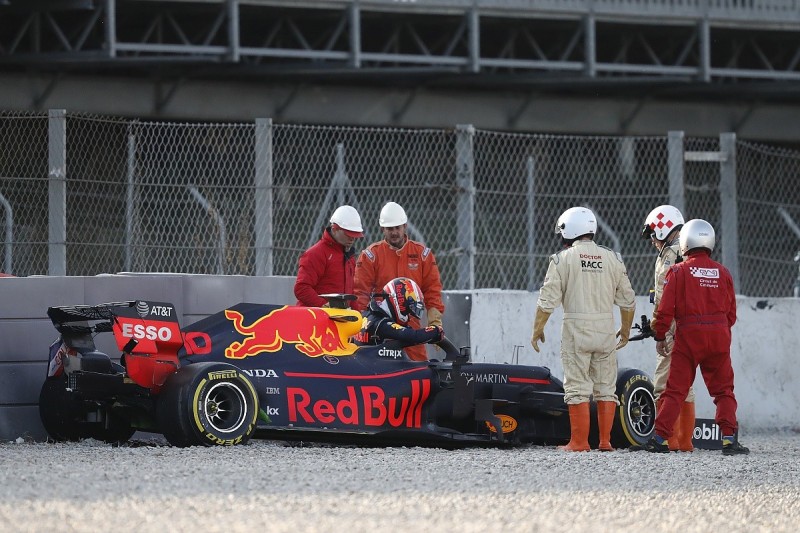 Most drivers concentrated on long runs during the session as testing got into fill swing. But there was a late flurry of improvements.

Lando Norris completed one of the longest stints of the afternoon in the McLaren and, like team-mate Carlos Sainz Jr the day before, he bolted on the C4 tyre - softer than that used by Leclerc - for a late push.

Also improving late was Toro Rosso's Alexander Albon on the C4s, after what appeared to be an impressive long-run on the C2.

Albon's time wasn't quite enough to jump Kevin Magnussen, who set a 1m19.206s for the third fastest time for Haas.

The team conducted 59 laps in Magnussen's hands, and then a further 13 with debutante Pietro Fittipaldi.

Fittipaldi got his first taste of the current Haas late in the afternoon, as Magnussen was having trouble with his seat.

The Brazilian, who is due to take the car for Wednesday morning too, finished Tuesday at the foot of the order with a lap of 1m21.849s.

Antonio Giovinazzi used the C4 tyre to claim fifth for the Ferrari-powered Alfa Romeo outfit. On his first day in the car he stacked up 101 laps after taking over from Kimi Raikkonen.

Valtteri Bottas took the wheel of the Mercedes for the afternoon only, and set the sixth fastest time on the C3 tyre. His time was comfortably Mercedes' fastest of the test so far, but his long-run pace - especially on the C3 tyre - was extremely impressive.

Behind Gasly, Nico Hulkenberg set the eighth fastest time, while his team-mate Daniel Ricciardo kept the ninth fastest time. Lewis Hamilton was 10th as he and Ricciardo handed over to their team-mates for the afternoon session.

Lance Stroll conducted a variety of run lengths for Racing Point during the day and set the 11th best time, ahead of Fittipaldi in the order.