Lewis Hamilton has questioned Max Verstappen's maturity after their Formula 1 Bahrain Grand Prix clash, suggesting a driver with greater experience would have finished the race

The pair made contact exiting the first corner in the early part of the race when Verstappen ran out wide to squeeze Hamilton.

The Mercedes driver escaped without damage, but Verstappen suffered a broken wheel and a puncture, while a differential failure caused his retirement.

Responding to comments from Verstappen's Red Bull team principal Christian Horner, who suggested the incident was one viewers wanted to see, Hamilton said: "It's interesting to hear from Christian.

"They've got a car that should be getting good results.

"Through these these kind of - I don't know if they're inexperienced or not totally mature - decisions, they are not getting the results they should.

"He [Verstappen] should have finished a decent race, because he's good enough.

"I think to myself if Fernando [Alonso] was in that car he would have finished a decent race and got points for Red Bull.

"I like to think if I was in that car I would have got points.

"I hope for them he's learning through whatever situation he's going through. I went through that stuff when I was a young guy.

"It's easy to get ahead of yourself and forget the respect for other guys you're racing with.

"I'm grateful that my car was still OK, because I had no intentions of touching anyone else. I was super cautious on the first lap.

"In that moment I'm like, that could have been a big, big blow in the championship. Fortunately it wasn't." 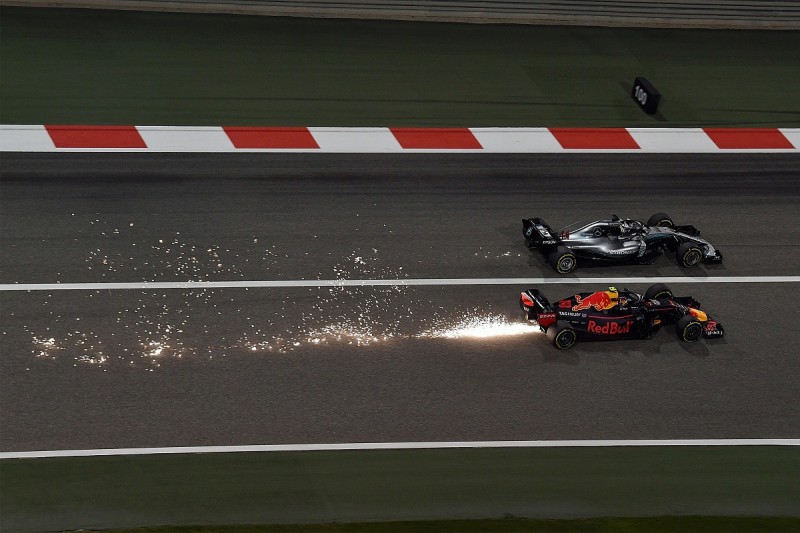 Hamilton, who referred to Verstappen as a "dickhead" before the podium presentation, insisted he had conceded the corner and left the Dutchman room to get safely past.

"When I look at it, and I came back and looked at the replay, my opinion hasn't changed," he said.

"If you look at it I was ahead for quite a period of time, and then I accepted defeat and just backed out, because I knew he was going to try to run me wide, maybe.

"But then he just kept going.

"I suppose he said he left room, but he didn't, if you look he was right out to the white line, and just didn't need to go there, because I'd already backed out.

"As a young driver, he's going to be learning all the time.

"He's got fantastic pace. But as youngsters we do not always make the right decisions."

Horner believed blame should be equally shared. "You can argue it both ways," he said.

"From Max's position Lewis should have conceded the corner, and from Lewis's position he's saying Max gave him no room to work with.

"You've got two drivers fighting over the same piece of Tarmac and unfortunately the contact with Lewis's front wing endplate and Max's rear wheel is what's done the damage.

"He [Hamilton] was lucky to get away with no damage to his car."

How Mercedes squandered its victory chance