The Dane produced a late flourish on Pirelli's super-soft tyre to knock Force India's Nico Hulkenberg from the top spot by a whopping 1.5 seconds and set the fastest time of the week so far.

Fernando Alonso continued Ferrari's solid start to the test with the third fastest time, racking up nearly 100 laps in the F14 T and splitting the Mercedes-engined hordes with a soft-tyre run in the late stages.

The Spaniard wound up less than a tenth adrift of the Force India, which topped Wednesday's running in Hulkenberg's hands.

Nico Rosberg took over Mercedes driving duties from team-mate Lewis Hamilton and caused two red flags in the morning. He recovered to end up fourth quickest, almost half a second further back.

Mercedes customer team Williams bounced back from a difficult first day with a fuel system issue to set the fifth fastest time with Valtteri Bottas at the wheel in place of Felipe Massa.

The Finn completed 116 laps in the FW36, comfortably more than any other driver, and enjoyed spells at the top of the times during the day.

The German was on for a top six time until Kamui Kobayashi made a late improvement on Pirelli's soft tyre.

Kobayashi endured a difficult start after taking over the Caterham from reserve driver Robin Frijns, but overcame telemetry problems to complete over 60 laps and break the 1m40s barrier.

Red Bull sister squad Toro Rosso also enjoyed a much better second day in Bahrain, after suffering a multitude of issues with its car yesterday. 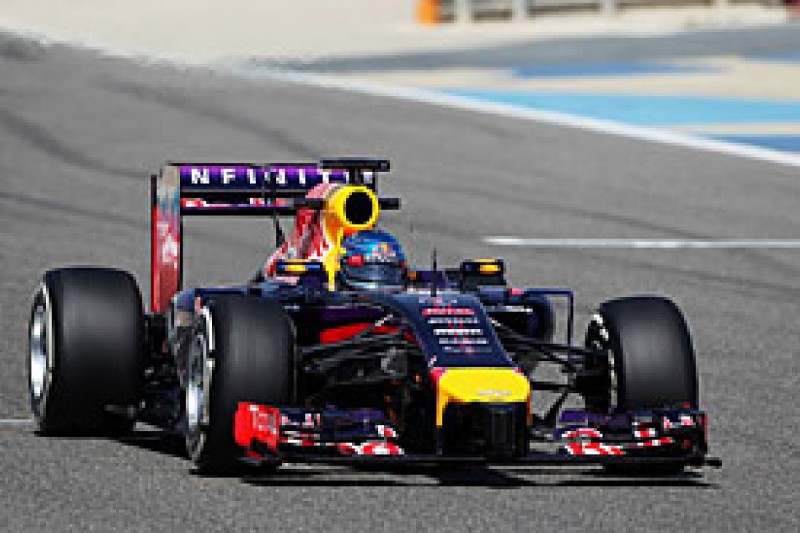 Vergne set the eighth fastest time, ahead of Esteban Gutierrez's Sauber and Romain Grosjean's Lotus, which completed just 18 laps due to a variety of installation issues with the 'twin-tusk' E22.

Max Chilton's Marussia ended up at the bottom of the timesheet.

A fuel system problem restricted Chilton to just 17 laps, after an IT issue on day one limited team-mate Jules Bianchi to just three laps of running.