Verstappen was the first driver to set a lap time and became an early session spinner when he ran wide exiting Turn 4, dipping his left-side wheels into the gravel and performing a neat 360-degree spin in his Red Bull before continuing.

When the serious running kicked off on supersofts Mercedes was quick to the hit the front with its updated car. Bottas and Hamilton were first into the 1m05s and Hamilton assuming control on a 1m05.525s at mid-distance.

Bottas emerged on ultrasofts just before his team-mate and reclaimed first place on a 1m05.354s, but Hamilton hit back immediately with a time three tenths of a second faster.

Vettel then split the Mercedes in his Ferrari and traded second place with Bottas over a succession of laps before Verstappen set a 1m05.072s on fresh ultrasofts to slot in just 0.045s behind Hamilton.

Mercedes' one-two was soon re-established though, as both drivers dipped below the 1m05s-mark - Hamilton on a 1m04.839s and Bottas just over a tenth back.

That remained the lead order, with Verstappen's best enough to keep him a tenth clear of Vettel in the best of the Ferraris.

Daniel Ricciardo beat the second Ferrari of Kimi Raikkonen - whose ultrasoft running was limited when he flatspotted his tyres - but was four-tenths down on his team-mate Verstappen. 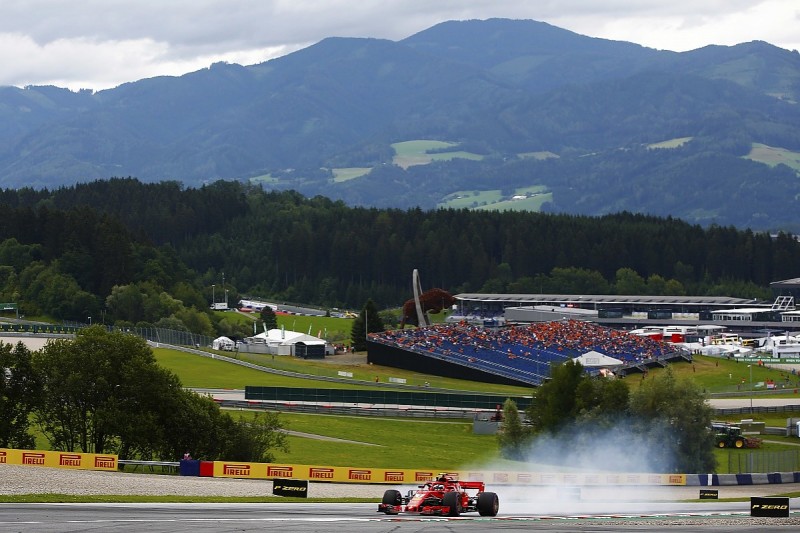 Ricciardo had been rapid on the early runs, using soft tyres as others used supersofts and ultrasofts, but then spent quite a lot of time in the garage as Red Bull checked for damage following a big kerb hit.

He improved but did not make massive progress when he emerged on Pirelli's softest rubber and stayed fifth, three tenths clear of Raikkonen.

Stoffel Vandoorne damaged his McLaren more significantly, breaking the tip of his nose when he took to the run-off between the two right-handers that end the lap.

Vandoorne wound up 18th, one place behind team-mate Fernando Alonso, as McLaren steered clear of the ultrasoft tyre.

An eventful session for Vandoorne also included a pitlane near-miss with Vettel that will be investigated after the stewards at lunchtime.

McLaren was the slowest team and its drivers were faster only than Toro Rosso's Brendon Hartley and Williams reserve Robert Kubica, who was slowest of all and 0.9s behind team-mate Lance Stroll as he replaced Sergey Sirotkin for opening practice.

Has F1 sanitised its soul?