Thanks to a pre-season test programme blighted by problems, Honda has limited experience of running in higher track temperatures.

In order to be certain of reliability and not risk losing one of the four power units allocated to each driver for the season so early, this conservative approach was taken with the way the engine package, particularly the MGU-K that is integral to the hybrid system, was run.

Jenson Button and Kevin Magnussen ended up slowest in qualifying, ranked ahead of only the two Manor cars that failed to run, and were at the foot of all of the speed traps.

"I expected in Barcelona much better pace in Australia, but unfortunately we don't have the experience of higher temperatures so we could not [risk] losing the engine in the first race," said Honda motorsport boss Yasuhisa Arai.

"Our settings are very conservative for this weekend, so that is the reason why we lose power with the MGU-K and the engine itself.

"The heat problem is not only with the engine, but also the MGU-K, we took that [reduction in] power to survive several races with the one engine."

With the second round of the championship bing held in hotter conditions in Malaysia in two weeks, Honda is likely to have to continue to take a conservative approach even if this sacrifices performance.

SOLUTION FOUND BUT NO TIMESCALE

But while there was no timescale put on when the concerns will be resolved and the engine run more aggressively, the team is certain it has identified the problem and the potential solution.

"Yes, we have identified the issues, actually we have much less issues this weekend than we had during testing," said racing director Eric Boullier. 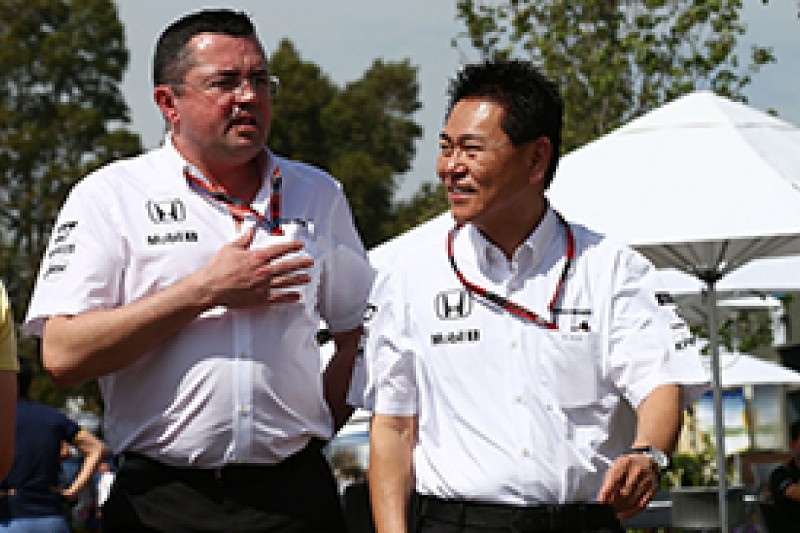 "That is good news, we made some progress.

"There is a fix in place and we are working on an 'absolutely' recovery. But is there a timescale? We don't know.

"We just want to do our best to recover as quickly as possible."

Button was the faster of the two McLaren drivers during qualifying, lapping 2.836 seconds off Q1 pacesetter Lewis Hamilton as he took 17th.

But once the fact that Hamilton ran on the slower medium-compound Pirellis while Button used softs is taken into account, the gap stretches out to in excess of four seconds.

While the performance was poor, Button hopes he can at least finish the race to maximise data - although he admitted earlier that 12-lap runs had been the car's maximum so far.

"As long as we are thinking on our feet throughout the race and trying to solve every problem on the way, we can achieve a race finish," he said.

"It's not going to get easy quickly but I think the things worth fighting for are always very tough at the beginning."