Lewis Hamilton claimed the first pole position of the 2014 Formula 1 season in qualifying for the Australian Grand Prix, while world champion Sebastian Vettel failed even to make Q3 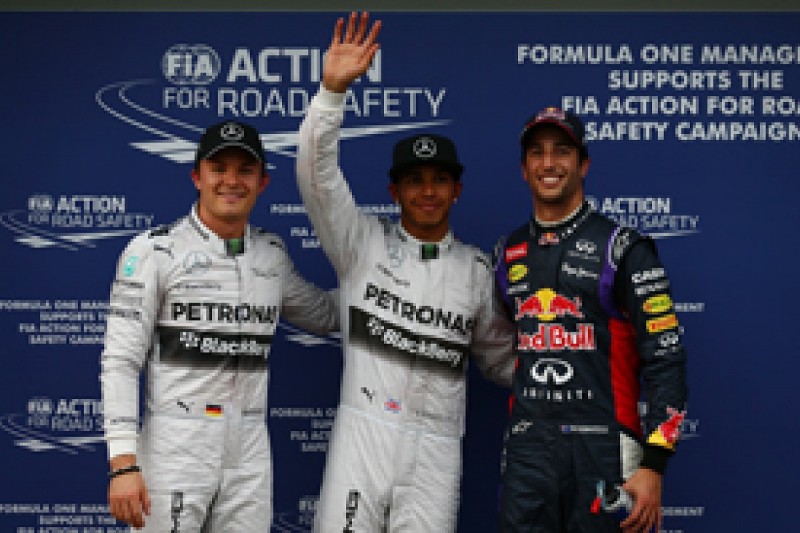 The Mercedes driver, on wet tyres, knocked Vettel's Red Bull team-mate Daniel Ricciardo, who was on intermediate rubber, off top spot by three tenths of a second in the final seconds of a rain-hit session.

Nico Rosberg, who had briefly taken first place before Hamilton and Ricciardo improved late on, was third ahead of McLaren's rookie Kevin Magnussen.

Both drivers, as well as fifth-placed Ferrari man Fernando Alonso, set their times on wet rubber with opinion split among the 10 runners as to which tyre compound was preferable.

Behind the pair was debutant Daniil Kvyat, who impressed despite an off in Q3 on the run between Turns 10 and 11.

He took eighth place on wet rubber, ahead of Williams drivers Felipe Massa (intermediates) and Valtteri Bottas (wets), although the latter must serve a five-place grid penalty for a gearbox change before qualifying.

Several of the drivers who failed to advance from Q2 to Q3 were unable to improve thanks to yellow flags caused by Kimi Raikkonen's late crash as rain returned in intermediate conditions.

The Ferrari driver lost the rear at the exit of Turn 3 and spun into the wall, with Vettel among those who were attempting to jump into the top 10 at the time.

With both failing to make the cut in 12th and 13th, Jenson Button made it three world champions to fail to make the top 10 shootout in 11th.

Marussia driver Max Chilton was the fastest of the drivers to be knocked out in Q1, which was effectively ended at a point when most had managed only one run thanks to rain at the halfway mark.

Chilton was just 19 thousandths of a second slower than Kobayashi, who did make the cut but was unable to do better than 15th in the second stage of qualifying.

Chilton's eam-mate Jules Bianchi, Sauber's Esteban Gutierrez (who will be hit with a five-place penalty for a gearbox change) and Caterham rookie Marcus Ericsson were also eliminated in Q1.

Joining them were the two Lotus E22s of Romain Grosjean and Pastor Maldonado, the latter not able to attempt a lap until the damp conditions late on and having two off-track excursions before aborting his run.