Fernando Alonso doubts that Williams will now become a regular threat to Alpine in Formula 1 despite his battles with George Russell over the two Austria race weekends.

Williams enjoyed its strongest performances of the season in the Styrian and Austrian grands prix at the Red Bull Ring as Russell fought for points in both races.

Russell was running eighth in the first race weekend, and was catching Alpine driver Alonso for seventh towards the end of the first stint before a power unit issue forced him to retire.

Alonso enjoyed a spirited wheel-to-wheel battle with Russell one week later in Austria, catching the Williams for 10th in the closing stages before completing a late overtake. It took Alonso a number of laps to pass Russell as the Williams FW43B proved a decent match for the Alpine car.

But Alonso did not believe that Williams would now act as a regular threat to Alpine despite its impressive display in Austria, noting it often fared well at the Spielberg track.

“No, I don’t think so,” Alonso said after the race in Austria when asked if he was worried the gap to Williams would now be smaller.

“I think they have made a step forward, but also we checked last year in Austria, they started 11th, so it seems to be a circuit they perform really well at.

“So I think we need to wait a couple of races to see if they are fast or not. But here last weekend, they were closer to us, and this weekend, we had a little bit more margin.

“I’m happy with the progress in these two weeks. It is up to us to keep it going into Silverstone.

“If we can repeat this kind of performance, it will put us in top seven or top eight, and that is a step forward for sure.” 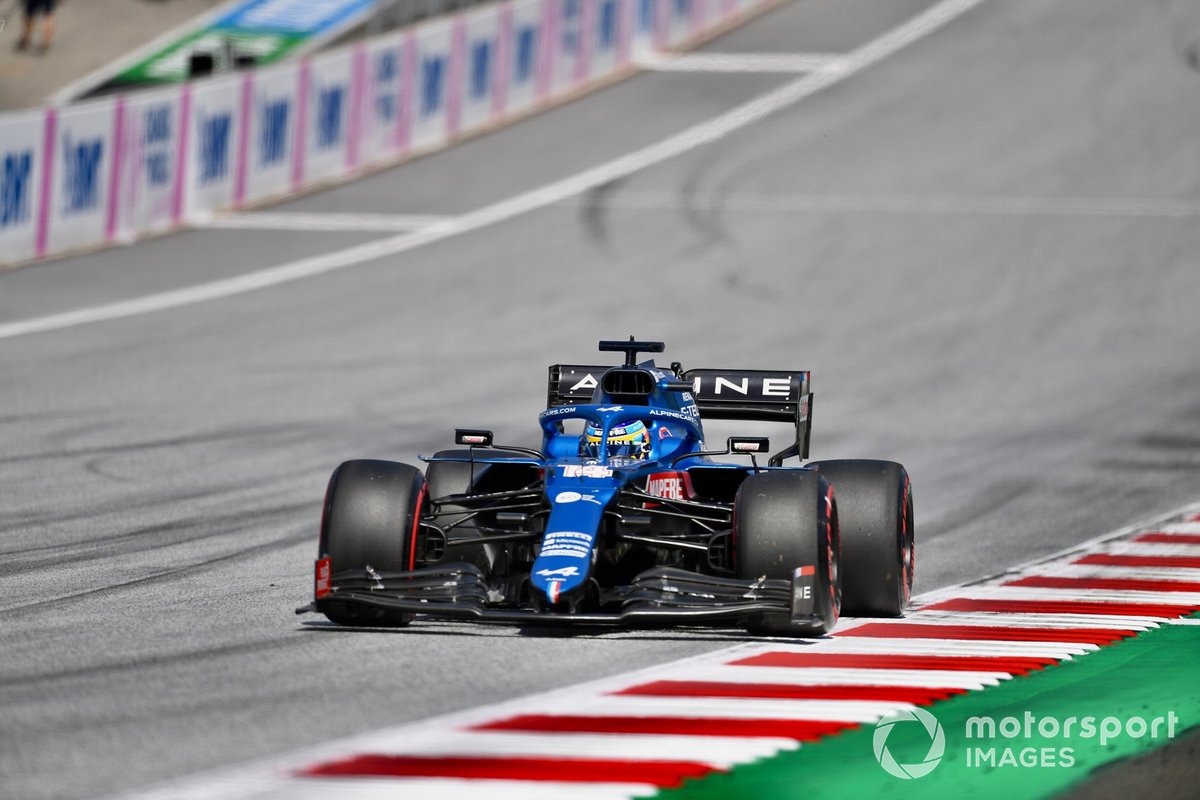 Alonso’s run to 10th place in the second Austria race continued his impressive recent form that has seen him score points in each of the last five grands prix.

The form serves as proof of the improvements the two-time F1 world champion has made since returning to the series after two years away at the start of the year.

But Alonso was reluctant to set any firm targets for either himself or Alpine through the rest of the season, saying the focus was chiefly on laying the foundations for the new regulations in 2022.

“The second part of the year is a wait in terms of performance for 2022,” Alonso said.

“A lot of teams will put all their effort into 2022 cars, so what we get and what we see every weekend is going to be not too different in the next race.

“There are no clear targets in terms of championship points or constructors’ championship. It seems we are settled at the moment. We will fight with AlphaTauri and Aston Martin for fifth place for sure.

“But I think it is more building the team structure, fine tuning on the pitstops, on the strategy, on the tyre management, and many things that we can do to be as prepared as possible for 2022.

“On the car side, it is up to the factories to produce the best package, but here trackside, we need to optimise everything and be as close to perfection as possible.”