The Melbourne race is set to go ahead this weekend despite the developing situation regarding the spread of COVID-19 across the world.

Autograph sessions that were scheduled to be held at Albert Park will be replaced by Q&A interviews, and press events organised for the build-up to the race have been impacted, as teams implement measures to reduce interactions for their drivers.

Albon was speaking at Red Bull media event alongside his team-mate Max Verstappen at Melbourne's Station Pier - where a 2m exclusion zone (pictured above) around the drivers was enforced during a press conference.

He said: "Even now walking around Melbourne it's obviously a different kind of atmosphere to what it's been like in the past.

"I mean I speak about the past, I've done one year. [But] it's going to be different.

"I'm not sure what's being put in place to be honest with you [regarding measures in the Albert Park paddock]. 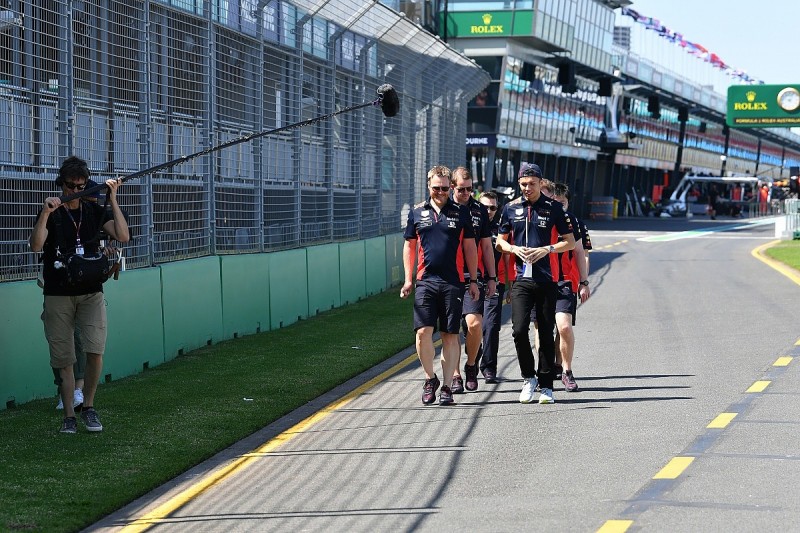 "But hopefully we can find the right balance between the drivers and the teams [on] the safety because it is obviously a serious problem, [while] also giving something to the fans to be able to interact with us in some way."

Three F1 team personnel have been taken in to self-isolation while tests are conducted to see if they have contracted coronavirus.

Following Renault's 2020 livery launch event at Albert Park on Wednesday - where Daniel Ricciardo and Esteban Ocon took the covers of the RS20 - its drivers were withdrawn from an accompanying press conference.

Renault team principal Cyril Abiteboul explained that the measure was being enforced "due to the situation" regarding coronavirus concerns.

"Obviously as we were planning this event, we were expecting a little bit more of a light atmosphere," Abiteboul said.

"Obviously I'm referring to the very particular circumstances in which we are in Australia and Melbourne.

"Usually it's a moment that we all love when we are racing in Formula 1, so I wanted to make a mention of that.

"I also wanted to say that our drivers were supposed to be with us for that event, but due to the situation, we've excused them from the occasion.

"I hope you understand why we are taking such measures."