The bet between Ricciardo and Abiteboul stipulates that the Frenchman must get a tattoo should his driver score a podium.

Ricciardo did just that in last weekend's Eifel Grand Prix at the Nurburgring, guiding his Renault to third place to score his first podium since winning the 2018 Monaco GP for Red Bull.

Abiteboul revealed the details of the agreement after Sunday's Nurburgring race, and how it had transpired.

"I'm always getting confused with that one," he said.

"But I think he gets to choose a design, and I get to choose the location and size, because size matters!

"So as long as I've got the size, I think I can cope or get away with pretty much any design.

"It's not really my style. I guess that's why I made that bet.

"I remember that night in Silverstone, that's the Thursday evening in Silverstone last year, where Daniel was showing me actually a new tattoo that he had. 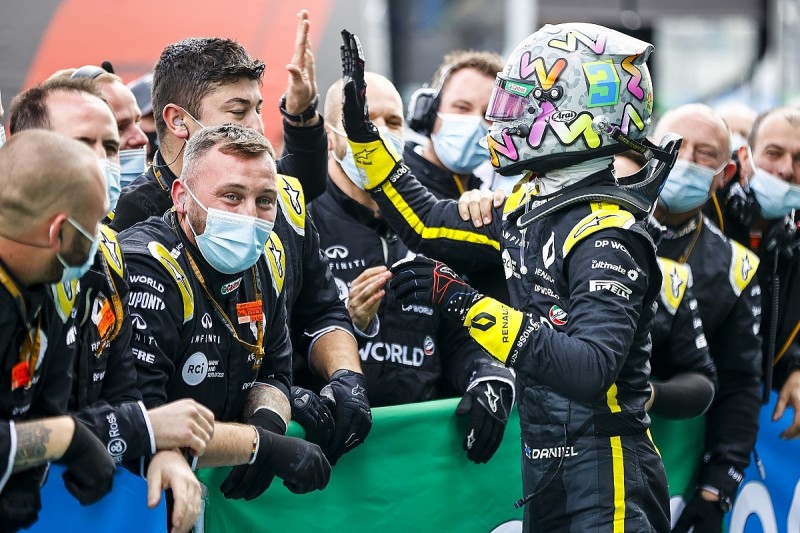 "And I actually asked him, 'How do you get there? What's the sort of mental journey that gets to this type of tattoo?' And he told me, 'Actually, well you know, I was just walking in front of that tattoo place, and I thought let's do one.'

"So I thought OK, alright. I said well, let's do something proper.

"So I'll do it. I just need a bit of time to decide the size and the location."

Ricciardo indicated after Sunday's race he will choose a design with a German theme to acknowledge the country where the podium was achieved.

"We'll have to do some thinking now," he said.

"Probably something to do with me but I think with a German flavour.

"This is obviously the place we did it so a little tip of the hat to something traditional in Germany as well."