Despite a winter of uncertainty and a low-key shakedown, the team formerly known as Honda Racing has been reincarnated as Brawn GP. Considering the poor performances of Honda in recent years, the new car's pace in its first tests has been astounding.

The neat little BGP 001 hides some unique features to its pace such as clever front suspension, a 'snow plough' bargeboard and complex diffuser, as well as the weight distribution advantage of not having KERS.

Now under the ownership of Ross Brawn, the team's personnel remains largely the same, while its new car is effectively the car Honda planned to race this year, but re-badged and re-engined. That is to say that the work on this car's design was commenced 15 months ago and largely completed while the team was still backed by the manufacturer.

Commercial negotiations to purchase the team continued all the way through to the end of February. Simultan 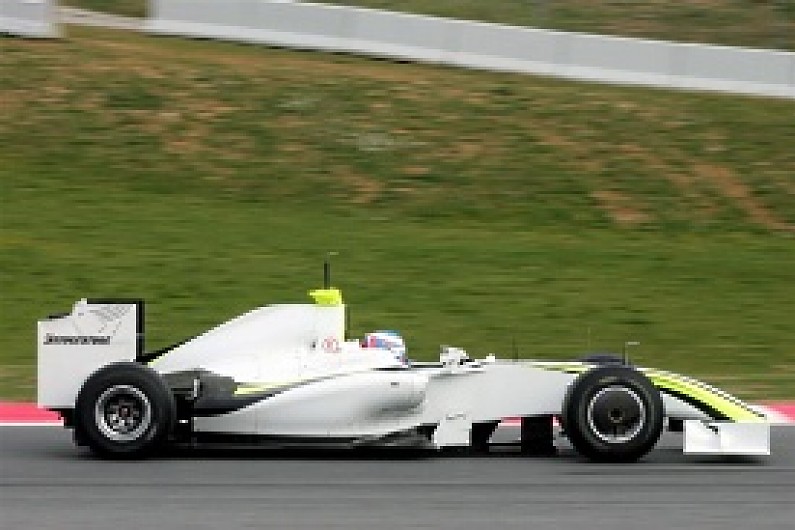 eously a deal to gain access to customer Mercedes engines was agreed and work was completed to redesign the car for the new engine.

At first, the car appears to be quite a conventional design, but the closer you look at the details, the more the innovation becomes apparent. It's obvious that the car has benefited from a lot of development since the project was prioritised last year, as a result of the poor performance of the RA108 campaigned by Honda Racing.

Starting at the front, the wide nose is as low as rules permit, at no less than 125mm high. Brawn GP appears to be the only team with this low approach: the shape is aided by two strakes running high up on the edges of the nosecone. More conventional is the front wing, which uses a two-element flap and an angular transition from the main plane towards the wing tips.

Brawn GP has still produced a full width wing, but effectively the wingtip curls down to form the bottom half of the endplate, rather than an endplate being formed by vertical fence added to the wing tip. To meet the rules a large vane has been added to the foot plate to create sufficient side profile area. 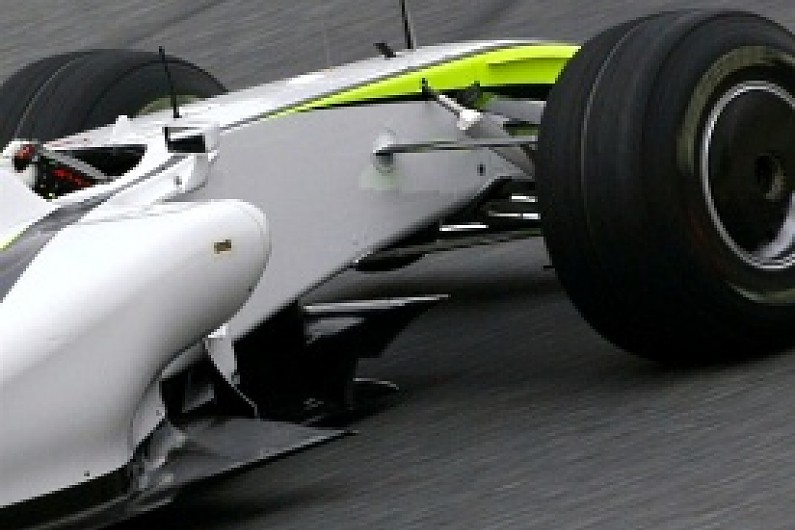 Having no endplate makes the high pressure flow above the wing tip spill down the sides and around the front wheel, which also usefully reduces drag, offsetting the negative impact of the wider wing.

Making the design even more complex is the separate cascade element added to the top of the wing's surface. Controlling the flow off the front wing, Brawn GP has uniquely positioned the steering rack low down in line with the lower wishbone.

By doing this the team is allowed to have a more streamlined lower wishbone shape as it's in tandem with the steering arm. This is important as the front wing is so much lower down this and the wishbones are hugely influential in managing the wing's flow back over the rest of the car. This feature may have defined the need for such a low nosecone.

Beneath the raised chassis is an innovative feature in the form of a snow plough solution, similar to that sported last week by Williams. Starting from the splitter, a curved horizontal vane rises up to pick up the airflow passing under the nose.

As bargeboards in their conventional location are banned, the only place to put a vane is under the raised part of the chassis. Thus the Brawn GP solution is effectively a bargeboard mounted on its side.

The tumbling vortex of air spilling off the edge of the plough heads under the raised floor of the sidepods and feeds the diffuser higher pressure air. This allows the diffuser to flow more air and hence create a lot more downforce. This might be a critical feature in the BGP 001's pace.

Even with this device the car also sports small turning vanes mounted just ahead of the sidepods. Also aiding flow over the sidepods are the mirror mounts, which like Force India use excessively long mounts to act at flow straighteners. In the BGP 001's case the mirror mounts are split to form a two element winglet-like appearance. While they may produce some downforce, their shape is most likely to control the flow over the sidepods as they drop away towards the rear of the car.

The car's sidepods themselves are incredibly small - the inlet is positioned McLaren-style, high and wide, leaving the maximum space for the undercut to send flow around the car.

One factor in their tiny size is that the team is not going to run KERS, thus the car only needs to cool the engine, and not the additional hardware required for KERS. This means its radiators and ducting are correspondingly smaller.

Not only is the inlet small, but the sidepods waste away to a very narrow exit. To maintain a reasonable exit size, the team ends the sidepod earlier than other teams, its small size aided by exiting the exhausts above it in their own fairings. The car also appears to exit hot air under the gearbox fairing and rear crash structure, as part of a complex diffuser solution.

The diffuser is a 'double decker' design: the 'U' shaped centre section does not form the roof of the diffuser, but is simply the lower deck of the set-up. The upper deck is formed around the crash structure and hence is a few centimetres higher than the limit of 175mm - this extra exit area is critical in gaining downforce.

Conversely, the rear wing is quite conventional as are the endplates, the lower beam wing spans the full width between the endplates, as the impact structure is shaped to pass below it, making the rain light appear lower than it really is. Flow to the rear wing is aided by a McLaren-style roll hoop - the undercut snorkel is supported by two struts leaving very little structure to the rear.

If the exterior is visibly well developed, then the mechanical and electronic work beneath the skin is not obvious, but was a huge task for the team to integrate its chassis and carbon gearbox to the Mercedes engine. 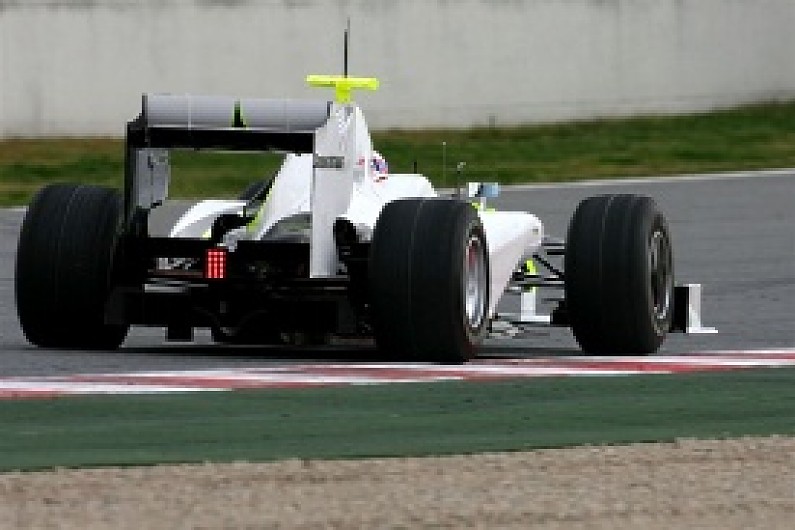 Unlike Force India's arrangement with McLaren-Mercedes for engine and gearbox, Brawn GP has simply gained an engine supply. It is reported that the team had options on both Ferrari and Mercedes engines, the latter chosen as the integration with the Honda chassis and gearbox was deemed easier. This would not only be the physical joining of the three interfaces (chassis\engine\gearbox) but also the revisions to fuel and cooling packaging and electronic integration.

Honda had already developed and track-tested its KERS system last year, using a flywheel system developed in conjunction with Flybrid. Unlike any other team, this was to be a pure flywheel solution mounted inside the front of the fuel tank, running off the front of the engine. This would not have required the same cooling and complex packaging demands as the electric or flywheel\electric solutions seen on its rivals.

As yet the team does not have plans to run KERS. Considering its late start to the season and limited budget, this seems to be a sensible route to take, as KERS is not mandatory in 2009. This choice might even have gained Brawn GP some of its pace, as the car can be configured to run ballast in the most efficient places (i.e. towards the front) rather than some 30Kg of the ballast being replaced by the KERS system in less efficient locations.

With the compressed timescales to get the BGP 001 ready for the first race, the car will continue to test in Jerez next week to gain the most track time possible before setting off for Australia.