Ferrari’s Charles Leclerc topped the first test session of the 2022 Formula 1 pre-season as the new era of ground-effect cars hit the track in an uninterrupted stint at Barcelona.

Leclerc guided the F1-75 challenger to the top of the timing screens with a little over 70 minutes of the four-hour run left on the clock as he posted a 1m20.165s effort.

That was 4s shy of the pole lap set by Lewis Hamilton in Spain for the grand prix last year on the updated layout with the revised Turn 10.

Leclerc’s benchmark was set while the Ferrari was shod with the yellow sidewall C3 Pirelli tyres, and the Monegasque also completed a landmark 80 laps as he found three tenths over Lando Norris.

For the first collective runout of the new grand prix machines, which feature a radical shift in aerodynamic philosophy to generate downforce via ground effect in a bid to improve overtaking, the public has not been able to access live timing or a TV feed.

Norris ushered in this new era when he became the first driver to take to the track at 9am local time aboard his McLaren MCL36, if only to complete an installation lap.

He was swiftly joined by George Russell, Charles Leclerc, Sebastian Vettel, Max Verstappen and Nicholas Latifi in what were initially cool but clear and dry conditions at Barcelona.

Although the emphasis has been away from the hybrid powertrain under the new rules, there was mass reliability as the four-hour morning stint passed without a red flag.

The field also combined to complete some 500 laps on Wednesday morning alone, but Alfa Romeo could only contribute nine laps to that total in what was a slow start for the team.

The team has relayed that its truncated running was down to a series of minor glitches and there was no cause for concern as test driver Robert Kubica ran in the new C42 that sported a camouflaged livery ahead of its fully fledged launch on 27 February.

After a long absence from the track, it took until the final 15 minutes of the morning for Kubica to post a true flying lap, the Pole’s 1m29.909s on C3s landing ninth of the 10 runners. 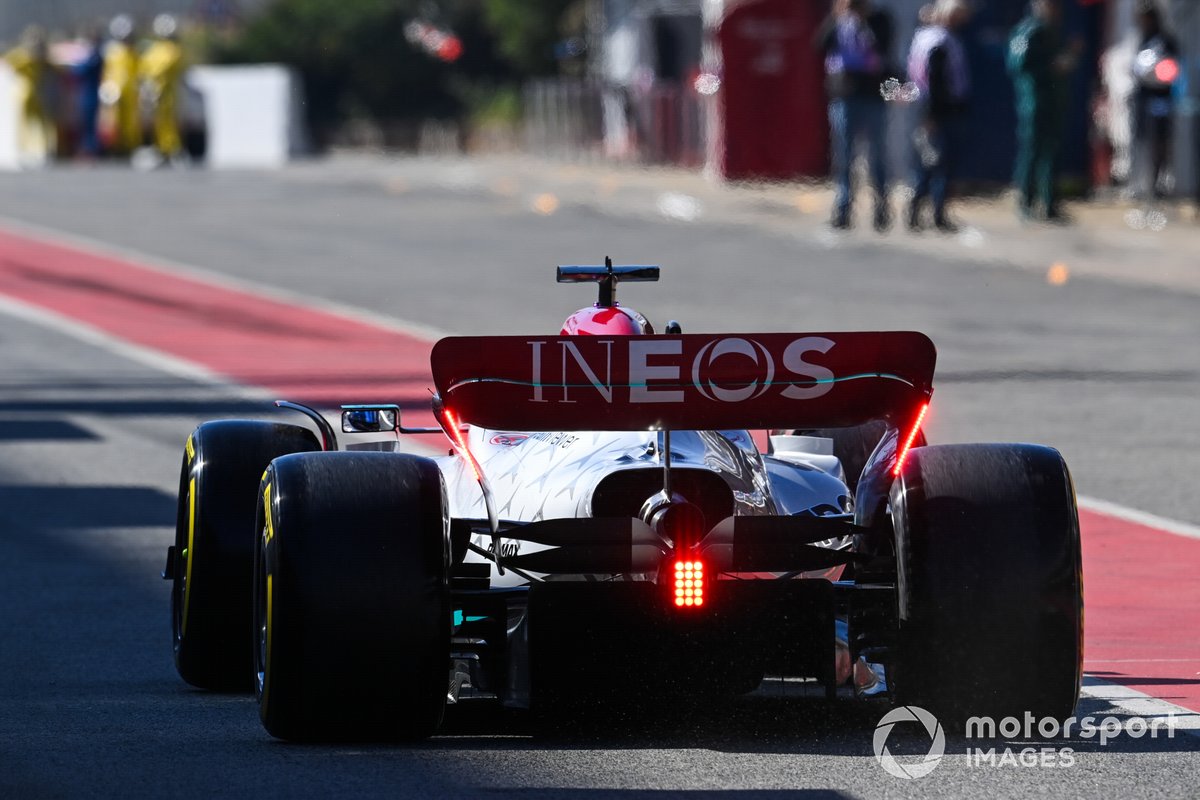 In the opening stages, Russell set the early pace in the Mercedes W13 as he hit the top of the timing screens with an albeit unrepresentative 1m25.548s effort on the C3 tyres.

He held the top spot for the first half an hour, before AlphaTauri’s Yuki Tsunoda and defending champion Verstappen bolted to the top – with Haas yet to leave the garage.

New Mercedes driver Russell ended the morning with the third-fastest lap as he posted a 1m20.784s on his C3 tyres and pumped in 77 laps before handing over the car to Hamilton for the afternoon.

Vettel ended up half a second in arrears while Tsunoda ran to fifth ahead of Verstappen.

The Red Bull driver gave onlookers the first proper glimpse of the RB18, after the team opted to launch a spec show car, and its eye-catching new sidepod design.

Verstappen had been an earlier pacesetter, running the C2 compound to set a 1m23.08s inside the first hour.

He shaved eight tenths off that in the fullness of time and chalked 80 laps - the joint highest tally with Leclerc.

Fernando Alonso ran to seventh fastest for Alpine with 54 laps under his belt, while Latifi was eighth, the Williams driver finding 2.5s seconds over Kubica.

Haas, which opted not to develop its 2021 challenger during the season to instead focus on the new design regulations, propped up the order as Nikita Mazepin was 10th fastest.

The so-called ‘shakedown’ session continues at 2pm local time (1pm GMT) for another four-hour stint before two more days of running in Spain across Thursday and Friday - all of which can be followed live on Autosport.

The paddock will then reconvene for what is recognised as an official pre-season test in Bahrain from 10-12 March, for which F1 will provide live timing and a full broadcast.