In strong sunshine but with fierce winds blowing throughout the session, Lando Norris set the initial first place benchmark time when the running commenced at 10am local time – the Briton continuing behind the wheel for a second day at McLaren as team-mate Daniel Ricciardo continues to feel unwell.

After backing off and cooling his tyres, Ocon went for a second flier a short while later but did not improve despite setting what were then fastest times in the first and third sectors.

Charles Leclerc then took over at the top of the times for Ferrari as the first of the session’s four hours drew to a close, as he went quickest on a 1m34.366s also on the C3s.

Half an hour later, Ocon, now running the C4 soft compound tyre, surged back ahead on a 1m34.276s, which stood as the fastest time to the end of the session.

Norris’s best time ended up being a 1m36.354s he set on the prototype C2 tyres Pirelli is trialling at this event, which feature a blank sidewall.

That left him fifth in the standings ahead of AlphaTauri’s Yuki Tsunoda – who at one stage in early in the session’s second half used DRS to close in on and pass Verstappen as they ran down the main straight.

Valtteri Bottas was seventh for Alfa Romeo ahead of Haas driver Mick Schumacher, who made his first appearance of the test in the VF-22 an hour into the session.

George Russell began Mercedes’ day running a large aerodynamic-measuring rake just in front of the rear wheels on the W13 and he later logged what would be the session’s ninth fastest time, also on the prototype rubber.

The most dramatic moment of the morning action concerned Latifi, who also propped up the times with a lap set on the prototype C2 that was 5.5s slower than Ocon’s best time. 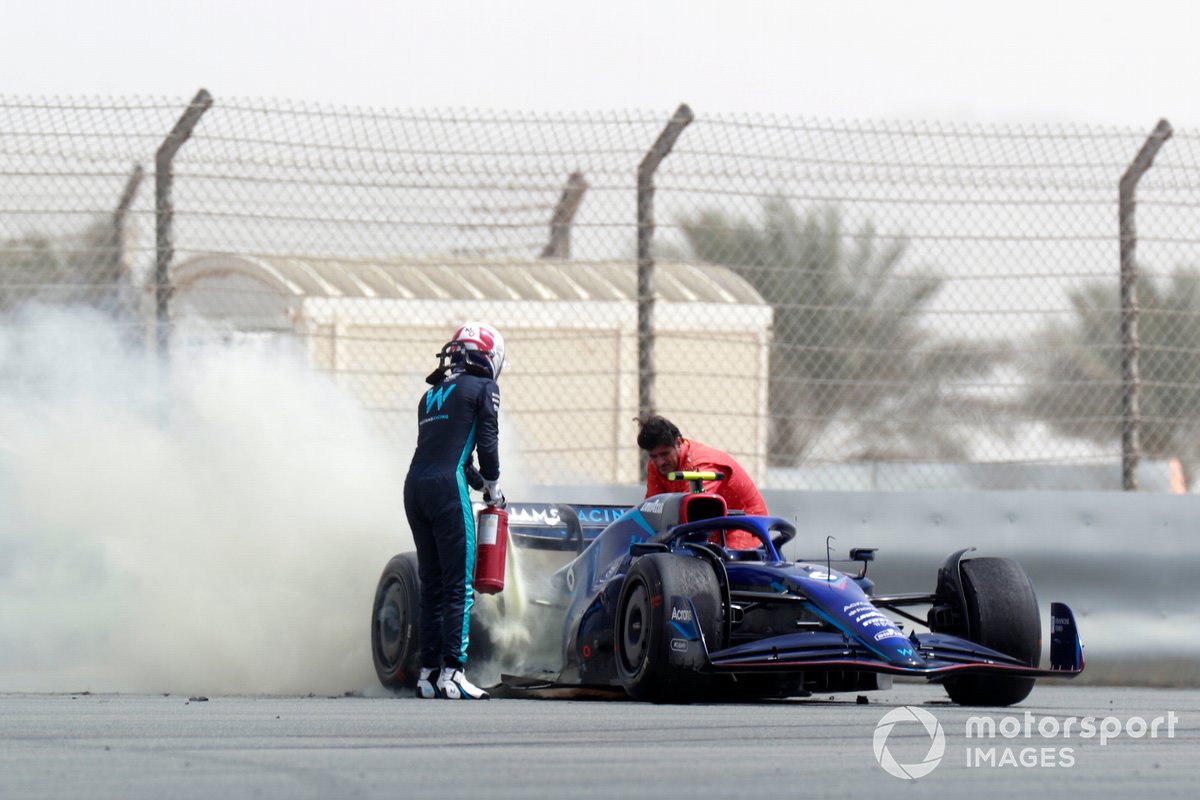 Approaching the halfway point, Latifi’s car suffered a braking problem at the end of the main straight and he negotiated the first corner, which resulted in both of his rear brakes catching fire as he continued on around the lap.

By the Turns 9/10 double left that leads onto the back straight the brakes were spitting flames fiercely and as they continued to burn they melted the Williams’ left rear suspension as Latifi went through the Turn 12 right hander and the end of the second sector.

He spun off backwards into the runoff and climbed out from there with the red flags flying, with the left-rear brake disc exploding as a Sakhir track marshal doused the FW44 with fire extinguisher.

Once the fire was out a near forty-minute stoppage followed before the Williams was brought back to the pits, where it remained for the rest of the session as the team investigated the cause of the brake problem.

Vettel’s running was also curtailed by a problem that occurred a few minutes into final hour as he pulled off the track at the exit of the Turn 4 right-hander – going up an escape road that formed the beginning of the outer loop layout used for the 2020 Sakhir Grand Prix and the extended track configuration used for the 2010 Bahrain race.

The Aston appeared to have had a problem exiting the pits after Vettel had completed a practice start, with its rear wiggling and the AMR22 not accelerating as it went down the pit exit, from where Vettel cut the opening turns before trundling down the short straight that follows before pulling off and stopping.

As he was completely off the circuit the session was not stopped while Aston mechanics were dispatched to help recover the car.

After it was brought back to the pits, Aston was able to get Vettel back out with 15 minutes of the session remaining – although the action was then immediately ended by a red flag that preceded an FIA race control systems check.

After the cars had all returned to the pits, the track went live again after a few minutes, but only so a simulated practice standing restart – that only featured Vettel, Bottas and Leclerc – could take place on the pit straight.

Verstappen and Russell were released too late to join in as the pitlane exit was closed as it would be during a race and they were forced to wait for several minutes before the ‘start’ was ‘aborted’ by the officials.

As Vettel, Bottas and Leclerc toured slowly around again – then joined by Verstappen and Russell as the pitlane was opened – Bottas pulled off in the runoff outside the Turn 8 hairpin and the red flags flew again, which ended the session a few minutes early.

Russell led the way on mileage, with 67 laps completed aboard the Mercedes, while Latifi's 12 laps made up the lowest total, ahead of Schumacher on 23.