Max Verstappen says Sergio Perez "took himself out" during their early clash in the Formula 1 Portuguese Grand Prix, with the Red Bull driver calling the opening lap a "disaster".

Low grip conditions left a number of drivers starting on the harder compounds dropping back on the first lap in Portimao as they struggled to get their tyres up to temperature.

Verstappen ran as high as second at Turn 1 after passing Valtteri Bottas, only for the Mercedes driver to fight back and force the Dutchman wide at Turn 3, allowing Perez to close up.

Perez tried to pass Verstappen around the outside of Turn 4 and the two drivers made contact. It sent Perez into a spin that dropped him to the back of the field, while Verstappen was able to continue without damage.

The stewards noted the incident but felt that no investigation was necessary as Verstappen went on to finish the race third while Perez recovered to seventh.

"It was quite eventful, the first two laps," Verstappen said. "The start itself was quite OK, I had a good draft and down to Turn 1, it was quite low grip, so I had to go a little bit wide. It was so hectic, the first lap.

"At Turn 3 I had to go a bit wide, and I think I was behind Lewis [Hamilton], but I had Sergio next to me. He was going around the outside of Turn 4, but then he just didn't leave enough space, so basically he just took himself out while I was driving on the normal line.

"Luckily I had no damage, but then of course you lose a bit of momentum." 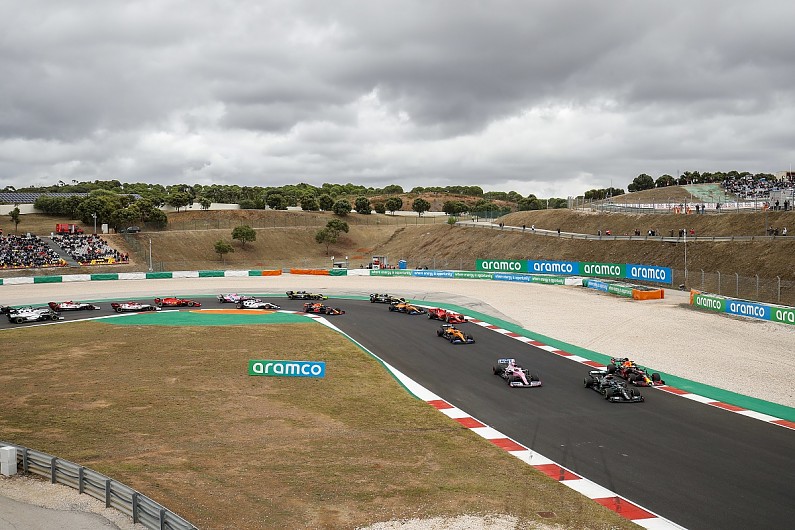 Verstappen was left struggling to get his soft tyres up to temperature, allowing the McLaren pair of Carlos Sainz Jr and Lando Norris to both overtake him.

"It was a disaster, I had no grip, and suddenly those McLarens were flying," Verstappen said.

"They were absolutely flying. I lost positions to them, but I didn't want to risk too much, because normally they are not the ones who we fight against in the race. Clearly the first lap they were unbelievable. I tried to stay out of trouble a bit, tried to settle down."

Verstappen was left trailing the Mercedes pair of Bottas and Hamilton once his tyres had got up to temperature and he had picked off both McLarens.

Tyre struggles continued towards the end of his first stint on the softs, and windy conditions also made it difficult for Verstappen to get into a groove with his mediums for the second stint.

"I got back into P3 and quite quickly my left front tyre died, so a lot of graining, so I had to box," Verstappen said.

"Once I put on the mediums it was fine, I think the pace wasn't too bad. It took a few laps to settle in, but also the wind lap to lap was changing quite a lot.

"One time you would go into a corner it was fine, the next lap you would have oversteer. So that also didn't make it easy to get settled in.

"But once the tyres were up to temperature, pace was good, then I just pulled away from the cars behind and I could do my own race.

"Of course, [Mercedes] were a bit too far away from that point onwards. But yeah, quite eventful in the beginning, and of course still happy to be here [in the top three]."