Lewis Hamilton says he had to lift off several times on the start-finish straight in the closing stages of Formula 1's Portuguese Grand Prix after suffering from leg cramp.

It was not all plain sailing for the Briton, who said that he faced a battle with his right calf muscle towards the end of the race.

"You know it's an incredibly physical sport but I had a cramp in my right calf," he said after his victory.

"So I was lifting quite often down the straight because it was about to pull.

"[It was] pretty painful, but I had to somehow get through it because it is what it is. You can't lift the whole lap."

Hamilton's victory came despite a tricky first lap where he fell down the order on the opening lap as he struggled to get his medium tyres up to temperature on the slightly damp track. 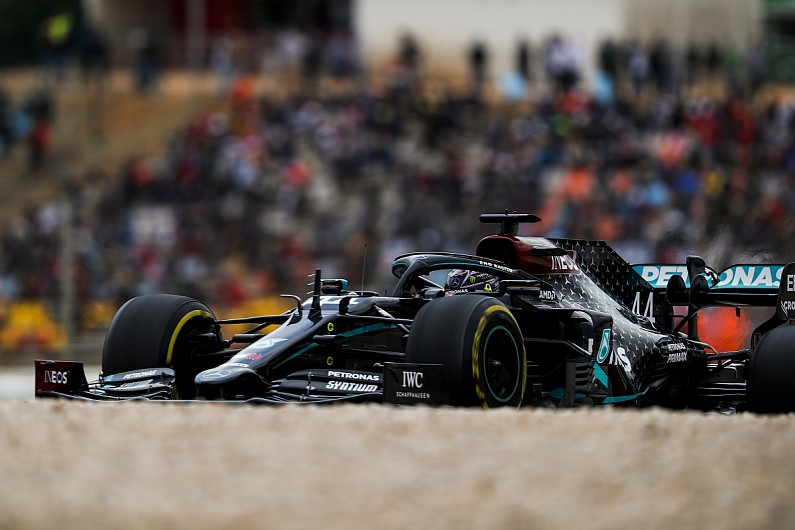 Hamilton then returned to the front after dispatching the previously rapid McLarens, before putting a move on Bottas to reclaim the lead.

"They said it was going to rain straight after the race but we got some spitting just at the start," he said.

"I had a good start but then going into turn seven I had a huge oversteer moment.

"And, you know, I didn't know what was next. So I really backed off massively and arguably I should have probably tried to defend from Valtteri, but I was like, 'No, I'll come back later on'.

"And fortunately, that's what I was able to do so."

Asked what it meant to take the record-breaking 92nd career win, Hamilton said: "It's going to take some time for it to fully sink in, but you know I was still pushing flat out coming across the line.

"I'm still very much in race mode mentally. But yeah, I can't find the words at the moment."

Hamilton's victory meant he further extended his lead at the head of the world championship over teammate Valtteri Bottas to 77 points, with five races to go.